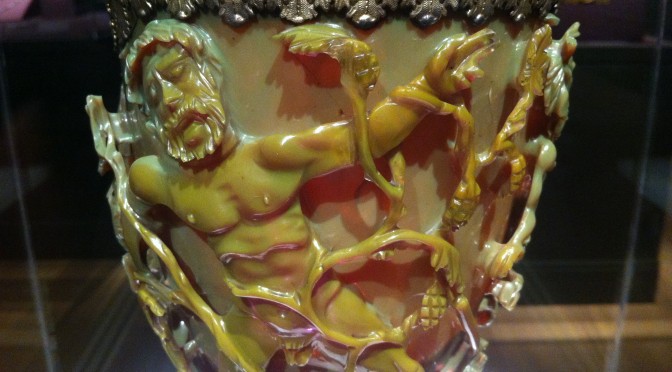 This is the complete transcript for this episode, which includes additional highlighted information not found in the free version of the episode available on YouTube, iTunes, and Vimeo. Get the full story at ancientartpodcast.org/curious.

Hello friends. Welcome back to the Ancient Art Podcast. I’m Lucas Livingston, your tour guide on our journey through the art and culture of the ancient world.

Back in episode 55 of the podcast about the Art Institute of Chicago’s new Greek, Roman, and Byzantine galleries, we met the Lycurgus Cup on temporary loan to the Art Institute from the British Museum. The Lycurgus Cup is an exquisitely well preserved example of luxury from the late Roman Empire. It was made in the 4th century of the Common Era, probably in Rome or maybe Alexandria, Egypt. [1]

The cup is quite exceptional in that it’s the best preserved example of a cage cup from antiquity. A cage cup is a conspicuously excessive type of luxury vessel where the outer surface is painstakingly carved away so that the thin outer framework resembles something like a cage for the inner cup. Only very slender bridges cleverly veiled behind the decoration connect the inner and outer surfaces. The meticulous process required the most delicate hands and expert eyes of master glass-cutting artists (diatretarius, diatretarii), so only Rome’s exceedingly wealthy society members could have afforded cage cups. We’re talking the emperor’s inner circle of friends and family. Even more exceptionally rare is to have narrative designs like on the Lycurgus Cup. Most surviving cage cups simply support geometric patters. While fragments of other narrative cage cups survive, the Lycurgus Cup is the only fully intact example of a narrative cage cup known today. [2]

Also spectacular about the Lycurgus Cup is its seemingly magical ability to change colors. It’s made of dichroic glass. “Dichroic” simply means “two colors.” That’s a bit misleading, though, because it wasn’t actually cast with differently colored glass. Rather, microscopic flecks of gold and silver are mixed into the glass. The minute silver particles in the glass cause light reflecting off of the surface to appear an opaque turquoise, but when light shines through the glass, the gold particles scatter the blue end of the spectrum, letting the red pass through, and suddenly the object glows with an eerie, spectral, crimson iridescence. It’s Ancient Roman nanotechnology! [3] For its exhibition in the Art Institute, a clever lighting rig in the ceiling permits you to see this magical transformation before your very eyes.

The Lycurgus Cup gets its name from the narrative depicted on its surface. Lycurgus was a mythical king of the Edoni, a Thracian tribe. In Book Six of the Illiad, we learn that King Lycurgus banned the worship of Dionysus and drove the worshipers from his land. [4] The ancient author we call Pseudo-Apollodorus shares with us in his work called The Library — sort of a compilation of Greek myths — that Lycurgus imprisoned the maenads and satyrs of Dionysus. As punishment, Dionysus drove Lycurgus mad, upon which the king killed his son with an axe, believing he was chopping down a grape vine sacred to the god. [5] Another version of the legend tells us that Lycurgus got drunk on wine and tried to violate his own mother. After sobering up a bit, he scorned Dionysus by trying to cut down the god’s sacred vines, believing that wine and Dionysian reverie were the root of all evil. [6] There are many other versions of the legend, including the specifics depicted on the cup. It’s said that Lycurgus took up an axe and attacked the nymph Ambrosia, a follower of Dionysus. [1] In self-defense, she transforms into a vine and curls her tendrils around the enraged king holding him fast. Here we see Lycurgus ensnared in the vines of Ambrosia, while the axe has dropped to his side.

If we turn the cup, we find the reclining Ambrosia recoiling from her attacker in shock and outrage. A pointy-eared satyr with a shepherd’s crook hurls rocks at Lycurgus with a perceptible fury. Dionysus, himself, makes an appearance shrouded in billowing eastern garb complete with a head wrap and thyrsos, the sacred staff of the god. [6] Dionysus was often interpreted by the Greeks and Romans as having been a god of eastern origin, who made his way to the west. So, we often find Dionysus associated with various foreign exotica.

The goat-legged Pan seems to dance through the scene perhaps rejoicing at Lycurgus’s fate, while a panther sacred to Dionysus crouches below ready to pounce the wicked king. The axe dropped by Lycurgus almost seems to cleave his foot in two. That could be a nod to the version of the story related by Hyginus, who tells us that Lycurgus, stricken mad by Dionysus, kills his wife and son and cuts off his own foot, believing he was chopping down the grape vines of the god. And it’s in this version of the myth that we learn that Dionysus threw Lycurgus to the panthers. [7]

You could interpret the dichroic play of green and red colors as relating to the story of Lycurgus. The crimson could be reminiscent of the blood of Lycurgus. The two colors, green and red, are also suggestive of the leaves of the grape vine and of red wine, or even the ripening of grapes from green to red, all of which relate to Dionysus, or Bacchus to the Romans. What we don’t know is if this was actually meant to be a cup in the first place. The gilded metal rim and foot were added in the 18th or 19th centuries. Evidence that dichroic glass was used as cups comes to us from emperor Hadrian, who is supposedly thought to have written a letter to his brother-in-law saying, “I have sent you parti-coloured cups that change colour, presented to me by the priest of a temple. They are specially dedicated to you and my sister. I would like you to use them at banquets on feast days.” [8] But the Lycurgus Cup could just as easily have been an oil lamp. The Corning Museum of Glass has in its collection a lovely cage cup suspended by a metal chain, suggesting it was used as an oil lamp. [9] Whether the Lycurgus Cup was a wine chalice or an oil lamp, it would have been equally spectacular in use. And just as it was prized in antiquity, so too is it celebrated and cherished by millions of spectators today.

Thanks for tuning in to the Ancient Art Podcast. If you enjoyed our brief discussion of the Lycurgus Cup, I hope you’ll head on over to ancientartpodcast.org/curious where you can get the full episode with far more intricate analysis. If you dig the podcast, be sure to “like” us on Facebook at facebook.com/ancientartpodcast and you can follow me on Twitter @lucaslivingston. You can subscribe to the podcast on YouTube, iTunes, and Vimeo, where you’ll hopefully give us a good rating and leave you comments. If you want to get in touch with me directly, you can email me at info@ancientartpodcast.org or use the online form at http://feedback.ancientartpodcast.org. Thanks for tuning in and see you next time on the Ancient Art Podcast.

[6] Despite the feminine breasts and exposed midriff, the scholarly community labels this figure on the Lycurgus Cup as the god Dionysus. I am tempted the possibility that this might not be Dionysus, however. A maenad would also make for a convincing argument. Maenads are regularly depicted holding the thyrsos. With outstretched hand, as though sicking the panther on Lycurgus, the pose of this figure resembles the winged female (fury?) figure on the Munich Antikensammlungen Loutrophoros, but is also reminiscent of the supposed Dionysus at left on the same vessel and the supposed Dionysus (top right) on the Naples Museum Lycurgus mosaic panel. For a brief discussion of the feminine appearance and characteristics of Dionysus, Apollo, Christ, and other divinities, see Thomas F. Mathews, The Clash of the Gods: A Reinterpretation of Early Christian Art, Princeton University Press, 1993, p. 135.