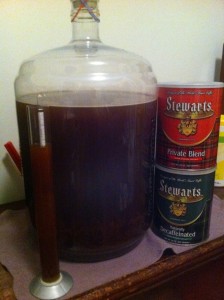 Started my second batch on June 3, 2012. I went with the Brewer’s Best India Pale Ale ingredient kit this time, IPA generally being my and my wife’s favorite style. Some unknown spirit must have possessed me at the final moment of brewing, because I felt the urge to add coffee into the mix. The Brewer’s Best ingredient kits are assuredly great (not just some pre-hopped malt extract, but with mixes of different grains, separate bittering and aroma hops, and all you need and want in one box). Something inside me, though, compels me to experiment. Mayhaps the light of the full moon spurred my impulse to introduce coffee into the brew. What I reached for was, of course, my preferred daily grinds — Chicago’s own Stewarts Coffee. Half caffeinated, half decaf, per my usual morning routine. 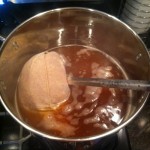 When I was resolved to take the plunge and introduce some coffee into the batch, I referred to my copy of Charlie Papazian’s The Complete Joy of Home Brewing, 3rd edition, which suggests on page 96 to steep 0.5 lb (225 g) of ground coffee in the hot wort during the final 5 minutes before sparging. That’s fancy talk for putting the grounds in the hot brew for 5 minutes after you turn off the stove, and then remove the grounds and other crud by straining. I simply added the coffee grounds to the grain bag (my Morebeer.com Personal Home Brewery came complete with 2 reusable mesh grain bags) together with the aroma hops, so there was no significant sparging required. 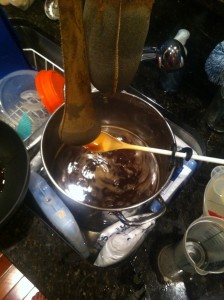 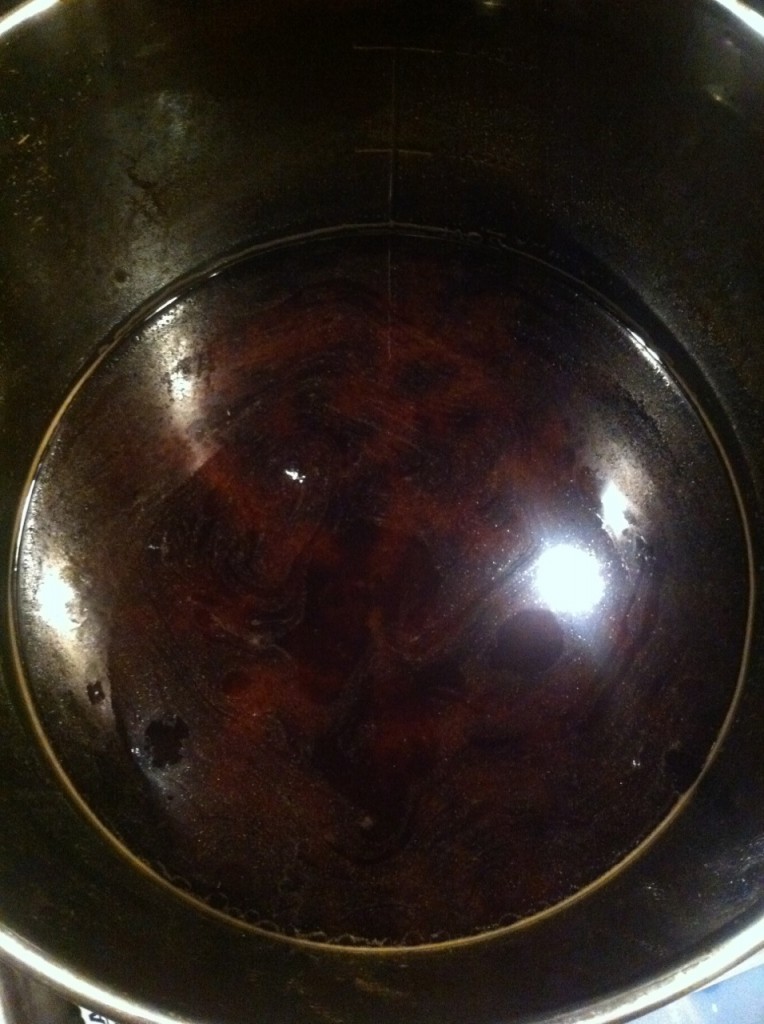 “Black as midnight, black as pitch, blacker than the foulest witch.”
Removing the grain bags and cooling the wort.

In retrospect, that was WAY TOO MUCH COFFEE! After tasting the cooled wort, all I could taste was extra-strong syrupy coffee (syrupy, naturally, because the malt sugars hadn’t turned into alcohol yet). I was worried this batch would simply taste like carbonated espresso (which may not be a bad thing to some people). But always press on!

The instructions indicated an original specific gravity in the range of 1.061-1.065, but my reading was 1.054. Pretty low. It could have been that I added too much water to the wort. Maybe I wasn’t paying attention to the temperature when taking the reading. Or perhaps the coffee had something to do with it. Oh well.

Fermentation pretty much ceased by June 12 (9 days after brewing). The specific gravity read 1.016. The instructions suggest a final gravity reading of 1.014-1.017, so I felt we were good to go with bottling.

We cracked open our first bottle of the Full Moon Half-Caf IPA on June 26 (14 days in the bottle). My first words were “Well, I probably wouldn’t order it again.” But the wife thought it was pretty good — and that’s from a non-coffee drinker!

We enjoyed a few bottles with friends on the 4th of July during our rooftop party with perfect 360-degree views of the skyline (in temperatures that also felt like 360 degrees!) The coffee flavor mellowed considerably by then and the color lightened up a bit, so it wasn’t quite the appearance of a stout or porter. My friend John brought some of his home brews, plus we had a couple other home brewers “in the house,” and a good number of connoisseurs, so it was quite the beer party. John’s been at it for a few years, so my Full Moon Half-Caf IPA and American Cream Ale paled in comparison to the tasty things he’s got going on, but a good time was had by all.

I’m looking forward to bringing some of the Full Moon Half-Caf IPA to Pennsic. Should serve well as my breakfast coffee.