Chili beer on the cheap and simple!

Every time we go out to visit my brother and sister-in-law in the Denver area, like to sit down for a pint of Wynkoop Brewing Company’s Patty’s Chile Beer. It’s not over-the-top spicy; nice and drinkable, but definitely with a good aroma and lingering kick. 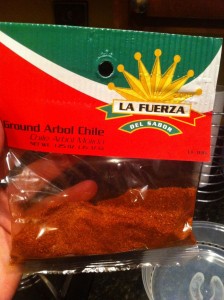 While I certainly don’t expect to replicate Wynkoop’s recipe, I thought it would be fun to dabble in the realm of chili beer. I got smacked by a lazy stick, though, and didn’t want to mess around just yet with the whole “roasting peppers” thing, and I didn’t want to make a second shipping stop. We had a package of ground chile de árbol (Spanish for tree chili) in the cupboard, so I convince myself to throw in some of that.

I wanted an easy-drinking beer, not a heavy stout or porter chili beer. I simply used the Brewer’s Best American Light Ale as the base. Having been quite pleased with our very first batch, American Cream Ale, I figured the light ale would yield some palatable brew if the chili proved imperceptible, nor would it overshadow the chili. Having never brewed chili beer before, though, and being wholly ignorant on just how much ground chili to use, I didn’t want to ruin the whole 5-gallon batch with too much chili. So I thought it wise to brew a couple growlers-worth at different strengths, and brew the remaining 4 gallons simply as light ale.

I took to the Internet to figure out if anyone else has brewed with chili powder and just how much powder to use. That’s when I discovered this fascinating thing called the “Scoville scale,” which (as I’m sure I’m the last person to learn) classifies how spicy something is. To my surprise, the chile de árbol is pretty flaming hot. Scoville heat index of 15,000-30,000, which is comparable to Cayenne and hotter than jalapeno. Tasting the raw ground pepper, it certainly has a good flavor. Not ridiculously spicy, but I did sneeze pretty good after giving it a big whiff.

So, I decided to brew one half-gallon growler with a mere 1/2 teaspoon of the chili powder and another growler with 1 1/2 teaspoons of chili. For future reference, that would upscale to 15 teaspoons (2.5 oz) for 5 gallons at the greater strength. In hindsight, it turned out to be not nearly enough. The spice is hardly perceptible in the beer. I think the wort tasted a bit spicier before fermentation. Maybe there’s some science at work that reduces the spiciness during fermentation.

For fun, I also added 0.5 ounce of leftover fuggle hops in the final few minutes of the boil for some good hops aroma. After terminating the boil, I kicked myself when I discovered a couple stray hops pellets left in the bag. 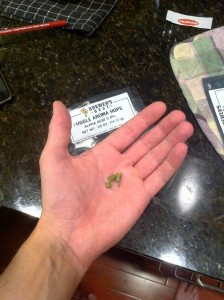 That enough to dry hop?

So, while my first attempt at chili beer turned out to be a dud, the plain light ale itself is still pretty good. Ain’t going to waste.