“And she mixed them a potion with barley and cheese and pale honey added to Pramnian wine, but put into the mixture malignant drugs to make them forgetful of their own country. After she’d given them this and they’d drunk it down, next she struck them with her wand and drove them into her pig pens and they took on the look of pigs with the heads and voices and bristles of pigs, but the minds within them stayed as had been before.” 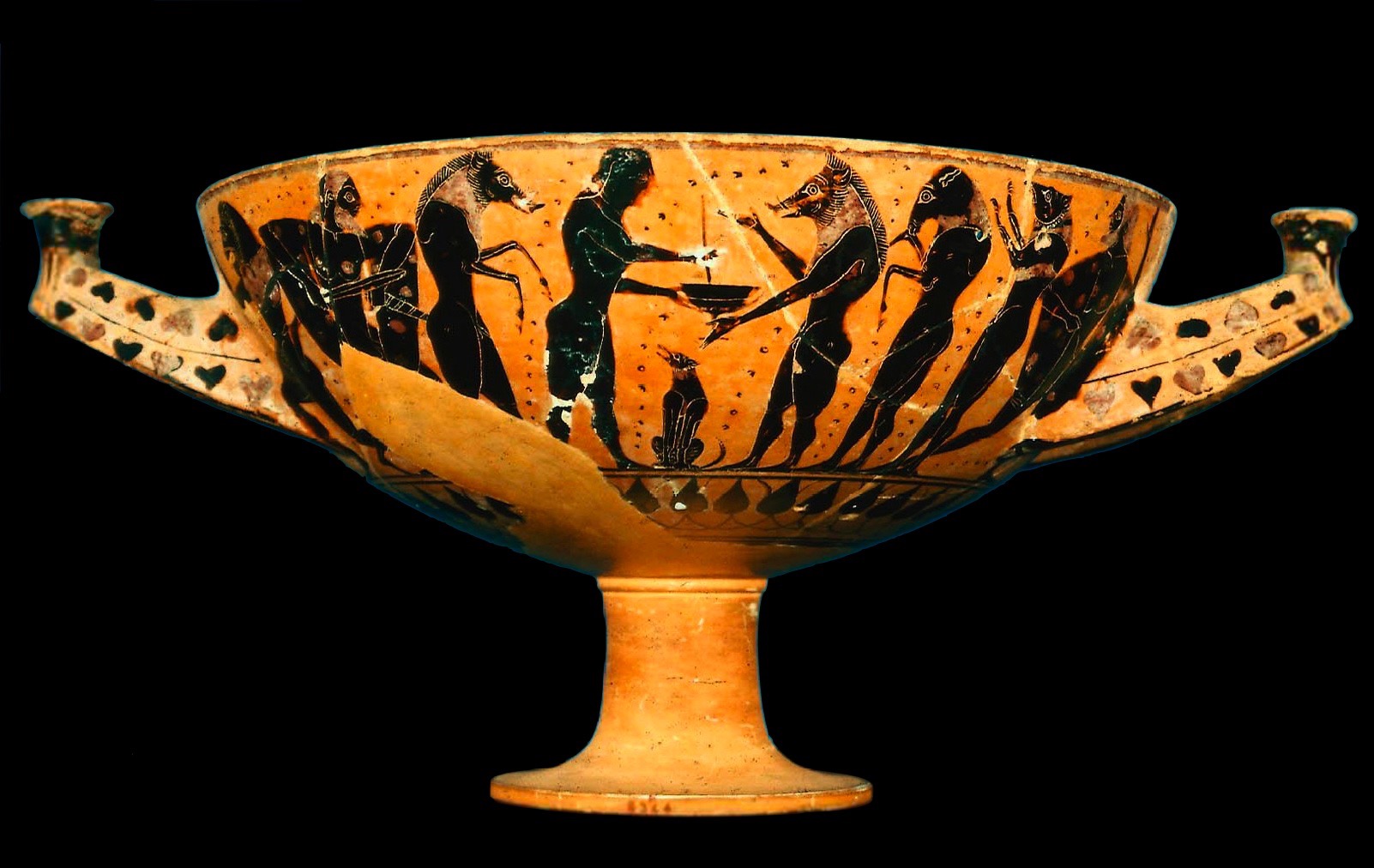 This passage from Homer’s Odyssey (Book 10, lines 229-43) has long inspired me. Why was Homer so specific about the ingredients for Circe’s potion until we get to “malignant drugs?” Surely some off-brand, generic drugs. The barley, cheese, honey, and wine sounds to me like a recipe for an ancient alcoholic beverage. 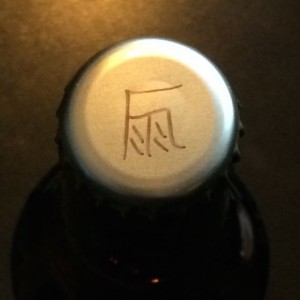 Turning to Pat McGovern’s research in Uncorking the Past on the micro-residue analysis from beverage vessels found in the tomb of the semi-legendary Phrygian King Midas, we learn that this 8th century BC king (d. c. 700 BC) — and presumably his subjects — enjoyed an alcoholic “grog” consisting of fermented barley, grapes, and honey. I.e. a mixture of beer, wine, and mead. (C.f. University of Pennsylvania Midas Touch.)

Except for the cheese, that sounds a lot like Homer’s recipe — well, and the malignant drugs, but I take that as Circe’s manipulation of a familiar alcoholic beverage as the delivery vehicle for her evil sorcery. Adding cheese to your beverage may sound a little odd at first, but think about it. We don’t bat an eyelash at wine and cheese pairing … or increasingly beer and cheese pairing.

We see another similar recipe in that other work of epic poetry attributed to Homer, the Iliad (Book 11, lines 628-43): 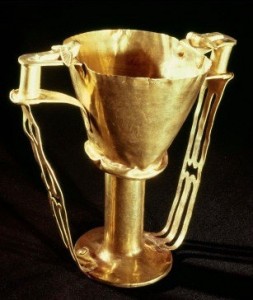 “There was also a cup of rare workmanship which the old man [Nestor] had brought with him from home, studded with bosses of gold; it had four handles, on each of which there were two golden doves feeding, and it had two feet to stand on. Any one else would hardly have been able to lift it from the table when it was full, but Nestor could do so quite easily. In this the woman [Hekamede], as fair as a goddess, mixed them a mess with Pramnian wine; she grated goat‘s milk cheese into it with a bronze grater, threw in a handful of white barley-meal, and having thus prepared the mess she bade them drink it.”

Ancient scholars date Homer (if there even was a Homer; don’t get me started!) to anywhere from 1100 to 850 BC. Precise dates don’t matter here. The point is that there’s both written and archaeological evidence across the Mediterranean World of the late Bronze Age and early Iron Age of this potent potable potion.

The term “potion” from the passages above in the original Greek is “kykeon,” related to cycle, circle, cyclone, and the like. Think of it as a hurricane of fermented goodness! Various translations use potion, mixture, and mess. I’m fond of “potion,” because that connects with the prevalent Ancient Greek equation of alcohol with a magical elixir. 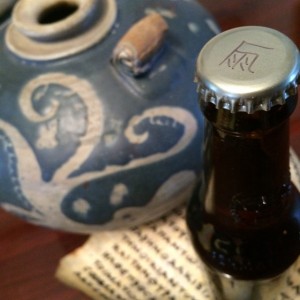 One ingredient conspicuously absent from this ancient ale, of course, is hops! That’s not news to anyone familiar with the history of beer, though. Hops wasn’t utilized in beer until the Middle Ages.

So, long in the short, I decided to brew it. It’s a reasonable assumption that all beer in antiquity was at least a bit tart due to fermenting from natural airborne yeast and bacteria. So I wanted to brew a tart, wild, unhopped ale with honey and grape must. Taking a page from Dogfish Head’s Midas Touch, I used Muscat grape must. The initial fermentation was with Belgian Saison yeast to give it an extra rustic kick. Then I let it sit for a month on Lactobacillus to flesh out the sourness. 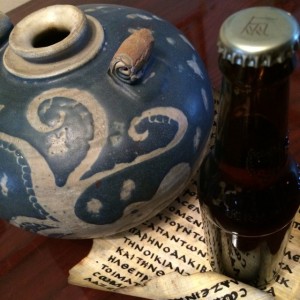 See the detailed recipe on BeerSmith.

Add honey at beginning of cool down. Initial fermentation with saison. Add grape juice to initial after vigor ends (3 days?)

Originally intended to include 8 oz lactose sugar as a nod to the cheese in Homer, but decided against at last minute. I don’t want it to be too sweet. Lactobacillus will be my token nod to cheese. Plus might be awesome served with goat cheese.

10-4
SG 1.023
It’s ready to put in secondary and add the Lactobacillus. Unfortunately I’m not ready, so we may have to wait a day or two.

11-1
SG 1.007
Saison flavor extremely present, but there’s definitely a slight tartness up front. I’ll give it more time and see what happens.

11-30
Took a small sample. Tartness is fantastic. Balances the strong saison yeast nicely. I think it’s ready to bottle. Wouldn’t be a tragedy if I had to wait a little longer, though.

12-20
SG 1.004 Damn!
Clean tart saison. Certainly floral notes from the honey and fruitiness from the Muscat. Dig it!
7% ABV

1/19
Chilled first bottle. Not carbonated yet, but not dead. Just needs a long time. Good as is, nonetheless. Like a wine instead of a beer. Personally, I’ll prefer carbonated, I think. Strong ester and floral bouquet. Definitely sweet honey and grapes, but a semi-tart dry finish. Would go nice with a trio of goat cheeses.

4/18
Either I’ve just finally gotten accustomed to it or it has aged nicely. Seems to have mellowed out. Tart is still upfront but everything seems to have come together nicely. I’ll still make some changes next time. More honey? Maybe a Bret blend? Add wine in secondary instead of grape must in primary?