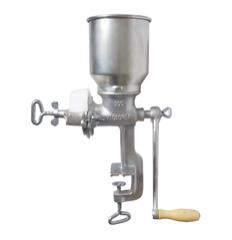 Yes, the fancy grain mills available at fine online vendors like MoreBeer are lustworthy, but the cheapest they offer, the Victoria, is still $60. (Incidentally, my money’s on it having been named after the time-honored default voice on the Mac.)

Wanting to brew some beer today and not having sufficient milled grain on hand (but having some whole Dark Crystal malt — rock on, Gelflings!), I decided to plunge into milling with what I have on hand. And what I have on hand is my HealthMaster Living Well Montel Williams Elite Blender.

Setting it to the lowest setting (“1”), I test-milled about 1/2 cup, comparing it to some store-milled grains I’ve been keeping in the fridge.

Okay, it may whip the grains more than crushing, but it serves the same purpose for brewing. Sure, the homebrew snobs out there would call foul. Some sort of argument about “proteolytic enzymatic power,” “endosperm,” and “beta amylaze,” but gimme a break!

I’ll still mill my grains at the homebrew shop whenever possible, but if this batch turns out good, I won’t hesitate to use my blender in a pinch.

Can you tell the difference? I’ve forgotten which is which. 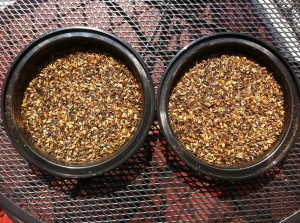 As an aside, this picture also heralds my festive merriment of the first truly Spring-like day in Chicago this year!

As another aside, this will be my first mash & extract transition brew (a bridge between extract and all-grain).

As a triple-aside, being inspired by ancient traditions (my initial motivation for this grand experiment), reading Buhner’s enlightening Sacred and Herbal Healing Beers: The Secrets of Ancient Fermentation, and not having any hops on hand, I’ll be brewing an ale without hops. Tune in for that blog post later!