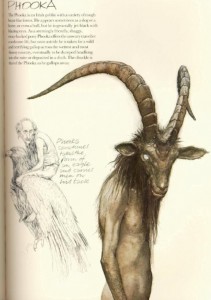 The mischievous creature of Irish folklore known as the pooka (phouka, phooca, púka) is a shapeshifter taking on many forms … a black horse, goat, rabbit, or — in my domestic situation — a tubby hairless harlequin sphynx cat. The pooka may be kind as a beloved pet or wicked as a black-hearted goblin. The pooka doesn’t mean to evil, but sometimes it just happens. Maybe it’s simply bored and needs more attention, or perhaps can’t find its favorite toy.

Legend has it that the pooka spits on overripe blackberries, which children are cautioned not to eat for fear of being poisoned by the pooka’s venom. In my confused mind, this strikes me as the makings for a perfect beer recipe. (Sidebar: For more on beer and spit, c.f. South American chicha.)

The Pooka in My Life

I only wanted to make a single growler (64 oz) batch of Pooka Berry Goblin Ale, but I brewed a 5 gallon batch of the base beer to for some other experiments. The base recipe is similar to Krampuslauf without all the extra Krampus that goes into Krampuslauf, because that’s the malt I had on hand, but next time I’ll use a much lighter malt. I enjoy the redness that Dark Crystal gives, but perhaps in smaller quantity next time.

Begin yeast rehydration process. Fill gallon jugs with filtered water and cool. (My favorite technique for rapidly cooling the beer, if you’re doing a partial boil, is to add the steaming brew to ice cold water.)

For Growler Boil, ladle off 1/4 gallon (32oz, but really only 28oz for headspace). Remember, this is a partial boil, so we need to add the hot wort to cold filtered water, which will bring us up to 64 ounces, or 1 growler — but really only about 60 ounces so we have some space at top for the yeast krausen.

This is where the Pooka comes in.

Using the 28-or-so ounces that I ladled off for the growler:

Cool to 150-180F.
Add 1/2 pound crushed blackberries for 15-20 minutes. (Charlie Papazian p90 has a basic discussion of brewing with fruit. In short, Papazian recommends 1 pound per gallon.)
Add the wort with the blackberries to the growler, add cold water to make about 60 ounces. Should be room temperature. Pitch the appropriate amount of rehydrated yeast. Note: if it isn’t obvious from the previous couple lines, I fermented the brew with the blackberries.

For the rest of the 5-gallon batch:

Add wort to cold water in carboy. Top off to 5 gallons. Pitch yeast when room temp.

Wed, 3/20/2013
Bottled the Pooka Berry Goblin Ale
3 tsp corn sugar primer with about an ounce of boiled water.
I got 4.5 bottles from the growler. Not much of a blackberry aroma.

I drank the first bottle of Pooka Berry Goblin Ale about a month later (late April). Overall the flavor was good. I like the general maltiness of the Dark Crystal and Blackprinz (if 2 ounces of the latter in 5 gallons contributes much). Of course, the Chinook hops is delicious, but not overpowering. I might prefer a subtler hops next time, though, just in case it proved to conflict too much with the blackberry. The blackberry taste and aroma was subtle. The blackberry presence started to grow after a few sips.

Next time I’ll probably try with a lighter malt (maybe only 1/4 lb Dark Crystal or something else, but I definitely want a red hue). Will probably try a combination of different hops. Not sure what, though. Probably twice the amount of blackberries too (2 pounds per gallon). That should definitely result in a strong presence.

That’s what I did with 10% of the 5-gallon batch. If Pooka Berry Goblin Ale isn’t interesting enough, this is where things get really crazy …