This impulsiveness that resulted in the Ungeheuer that is my Full Moon Half-Caf IPA produced something of an inundation of intense coffee flavor that drowned out the glorious hops I hoped to love in the pale ale.

Not wanting to make a similar mistake on batch 3, but still wanting to indulge my experimental instinct, I took a little bit more of a premeditated approach with the Scottish Ale. 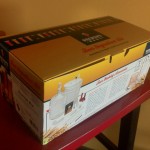 I confess I’m not quite familiar with Scottish Ale, but with the relatively low alcohol content (about 3%), I was hoping for a comparably subdued flavor that would lend itself to subtle intricacies of various adjuncts (i.e. you could still taste the extra crap I threw in there.) 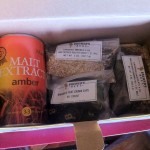 The Adjuncts: Rosemary, Allspice, & Honey
On June 23, 2012, I brewed the usual 5-gallon batch. While the batch was boiling, I did a little taste testing with different spices. Using a cheap beer, whose name shall not be named, I prepared 3 different samples using combinations of allspice, fennel, and rosemary. I steeped different combinations of the spices in 3 glasses with an ounce or so of hot water for a couple minutes, then topped off each glass with the cheap beer, whose name shall not be named. Then I beckoned the wife to come taste test. The samples were:

The fennel gave the beer a delightful earthy anise/licorice flavor. The allspice offered a subtle warm Christmasy spice cake or almost gingerbread taste. The rosemary could scarcely be tasted, but provided a powerful piney-rosemary (duh) aroma. The wife and I decided anise flavor and alcohol can best be left to the Ouzo 12 living in our fridge, so we went with allspice and rosemary.

We had cooked up a partial boil of 2.5 gallons, to supplement that with 2.5 gallons of filtered water for the 5-gallon total. We dumped only 8/10 of the 2.5 gallons of the brew (about 256 ounces) into the plastic fermentation carboy and the other 2/10 (64 oz) split between two 64-ounce glass growlers (Revolution and Piece, in case you’re wondering). To one growler we added the allspice and rosemary. About 5 dashes of allspice and a good 3 pinches of rosemary. To the other growler we added about 1/4 cup of honey, which we had boiled in a half cup of water to kill any undesirable microorganisms.

We then added an equivalent amount of bottled water to each portion of brew (maintaining the 50/50 partial boil ratio.) We decided to use bottled water for this batch.

Water Quality
Previously we had simply used straight tap water. Papazian’s The Complete Joy of Homebrewing calls or gypsum or other minerals to control water quality or a filter to get out the chlorine. The dudes at Brew and Grow indicated that straight-up Chicago water might contribute something of a Band-Aidy flavor to your beer. A little light bulb lot up over my head when I heard this. Maybe that’s the flavor that’s been bugging me with batch #1, the American Cream Ale. It was still plenty good, but did have a hit of plastic in the aftertaste.

We bought 3 gallons of cheap drinking water and we’ll reuse the jugs to refill with filtered tap water for later batches.

Specific Gravity
I took the original gravity (OG) reading from the 4 gallons in the carboy. OG was a bit high, so I thought “To hell with that!” and added a bit more water until it fell within the acceptable range. That’s one way to ensure you always get the right OG! I brought the OG down to 1.034. I left the 2 growlers as they were, though, so they may end up with a (negligibly?) different alcohol content.

There was a perceptible honey aroma to that one and a great rosemary aroma to the latter. It was pretty exciting. We had a bit of beer left over from each growler and the carboy. Not enough to fill their own bottles, so we mixed all three together in one bottle, which we dubbed “Ultra Basturd” (sic). There was a little math involved — saving about 50 ml of priming sugar water solution for each growler.

We finally cracked the honey ale and rosemary & allspice ale on Sunday, July 22 (3 weeks after bottling). I’m currently enjoying it on my balcony as the day cools into night. For the rosemary & allspice my initial words were “That’s awesome!” High carbonation, per usual. Wonderful Christmasy rosemary aroma. Deep amber color. Lasting rosemary and allspice taste with a bit of a molasses finish. I think it would go very well with gingerbread.

The rosemary nicely combats the sweetness of the plain Scottish Ale, while the allspice takes away the (in my opinion) slightly less desirable ale bitterness. Don’t get me wrong. I’m quite the hop head, but I’m not a huge English (or Scottish, as the case may be) ale fan. I’m more of a pale ale fan. 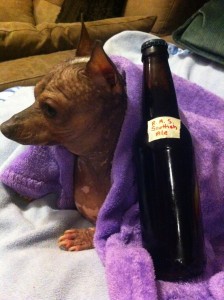 1 out of 1 dog approves of Rosemary Allspice Scottish Ale

The honey ale is excellent too. Not particularly heady at all, although equally carbonated. The bottle also had considerably more sediment than the plain and the rosemary allspice. It’s a fairly opaque amber beer. The honey aroma is minor but perceptible. The initial taste is rather similar to the Scottish ale, but it definitely has a different sweetness for the aftertaste. You can also notice the “coffee” flavor of the Scottish ale, whereas I think the rosemary allspice somewhat kicked that out.

Between the three — plain Scottish ale, rosemary allspice, and honey — I’d certainly grab another rosemary allspice before the other two, and I think I’ll keep that savory combo in mind for other concoctions.