They say you don’t get in to homebrewing to save money on beer, but it’s totally possible.

Let’s call that a bonus feature. Even expensive homebrew comes out to a little over $1.00 per bottle. Typical craft beer in the store will cost you around $8-$12 for a six pack. That’s $1.33-$2 per bottle. As a basis for comparison, let’s take a look at homebrew ingredient kits. (All-grain brewers, look away.) A casual browse of MoreBeer.com shows a range of prices for extract ingredient kits. The most expensive I see at the moment is JP’s Imperial Porter clocking in at $50. The cheapest I see is Scottish 60 Shilling Ale for a mere $20. The average price is around $30-$40.

That’s about the same price range for the Brewer’s Best kits in at Brew & Grow.

One time I did a price comparison if I were to buy all the ingredients à la carte. Turns out these ingredient kits are a pretty good buy unless you brew all-grain or buy in bulk.

Ingredient kits are designed for a 5 gallon batch. That’s about 50 bottles. Of course, you may lose upwards of half a gallon if your yeast is particularly active. So, simple math: $50 for 50 bottles = $1 per bottle even for expensive homebrew. Now, the Scottish 60 Shilling Ale at $20 for 50 bottles comes out to $0.40 per bottle. That’s pretty darned cheap, but you can totally beat it. Here’s the secret: add water. Shhh…!

On a recent trip to Brew & Grown, I picked up an American Light Ale kit for about $25.00. Instead of brewing a 5 gallon batch, I split up the wort into two carboys to make a total of 9 gallons (my 5 gallon plastic carboy and my 4 gallon glass). The total cost came to about $30, because of tax and I threw in a couple extra ounces of Chinook hops to make it more appealing to my hop-head palette. Not quite a Pale Ale, but getting there. 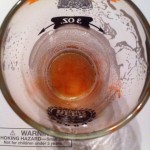 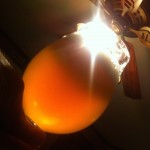 Using my preferred heresy, er, method, I let the hot wort cool overnight in the kettle. Experimenting with another heresy, I reused my yeast from a previous batch, but that’s another story for another blog post. Upside: I’ve got a sachet of Lallemand Nottingham dry yeast in the fridge. The next day after brewing, I pitched the “washed” reused yeast and then split the 3 gallons of room-temperature wort between the two carboys, roughly 5 parts in one and 4 parts in the other, but I just eyeballed it. Then topped them both up to about 5 and 4 gallons respectively.

OG 5 gallon plastic carboy 1.03
OG 4 gallon glass carboy 1.02 — looks like I added a little more water to this one. Whatever. That’s how I roll. Wanna fight about it!?

After 3 days of dry hopping, it was good to carbonate.

The contents formerly of the glass carboy are still sitting in the brewery. I might dry hop it or perhaps add a little DME and yeast to restart some fermentation and add some fruit. That’s probably more ambitious that it warrants, though.