Inspired by the recipes of Ancient Egyptian beer and wine and taking a page form Egyptian mythology, Pharaoh Hop’n’khamun is a work in progress.

The gist of it can be gleaned from this fun little video I put together:

As I say in episode 52 of my Ancient Art Podcast about Wine in Ancient Egypt, “Egyptian wine included a variety of added ingredients like coriander, sage, thyme, mint, and other herbs and spices. They weren’t all added at once, but chemical analysis of ancient residue reveals different ingredients in different quantities. So you’d have a variety of styles and flavors. Fruit like figs and whole grapes or raisins were also added to enhanced the taste and possibly even help kick-start the fermentation.” 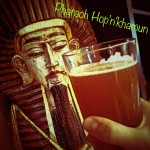 There’s been only limited analysis of Egyptian beer residue and one study by archaeobotanist Delwen Samuel revealed malted and unmalted barley and emmer grain. Emmer is an ancient type of wheat, so at least one study shows us that Egyptians brewed wheat beer. Thus, I decided that Pharaoh Hop’n’knamun will be a wheat beer. But what about all the great additives like we see in wine? I’d be shocked if the Egyptians didn’t include fruit, herbs, and spices in their beer. Like we see in today’s booming home & craft brew phenomenon, there were undoubtedly many home recipes and regional styles. But one ingredient we won’t find in Ancient Egyptian beer is hops! Hops wasn’t a common ingredient in beer until the Middle Ages and was predominantly a European plant. Insofar as I’m aware, it wasn’t found in Ancient Egypt. 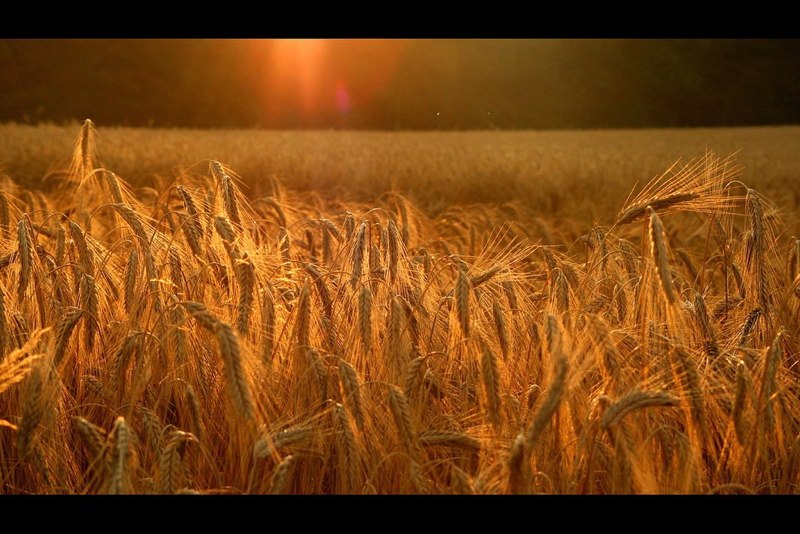 But what’s a beer today without hops!?! In fact, one of the primary purposes of hops is preservation. The resins in hops serve as a preservative for those long ocean voyages, hence supposedly the India Pale Ale, extra-hopped for those trips from England to India. Beer and wine in antiquity often included different plant resins instead of hops much to the same effect, as a preservative and also as a sealant for the porous earthenware storage vessels.

Probably the most entertaining Egyptian myth related to beer is that of Sekhmet’s slaughter of mankind. As I say in episode 51 of my podcast about Beer in Ancient Egypt:

The notion of adding fruit to beer is explored in the ancient legend of the lion goddess Sekhmet, the ferocious enforcer of the gods, who went by the code name the “Eye of Ra.” According to the legend found in the tomb of King Tut among others, humans had plotted against the sun god Ra, because they thought he had grown weak and feeble in his age. Well, Ra wouldn’t have it. So he sent forth his assassin, the Eye of Ra, in the form of the cow goddess Hathor to destroy mankind. She went into the desert and butchered the cowering people, who rightly feared Ra’s vengeance. Ra was pleased with her work and transformed her into the bloodthirsty lioness Sekhmet (the “Powerful One”). All night Sekhmet waded in the blood of those she had slain. Ra grew concerned about Sekhmet’s blood lust and feared she would continue her rampage in the morning until all of mankind had been slain. So, he had his servants brew a massive quantity of beer mixed with the red fruit of mandrake in some versions of the tale, red ochre mineral in other versions, and pomegranate fruit in yet other versions. These 7,000 jars of blood-red beer were poured onto the ground where Sekhmet planned to begin her slaughter in the morning. As dawn broke, she came upon the lake of beer. Thinking it to be blood, she gorged herself until she was so entirely drunk that she couldn’t continue with her rampage. Then the fierce lioness Sekhmet transformed into the sweet, demure, pussy-cat goddess Bastet. 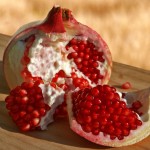 So pomegranate definitely had to be an ingredient in Pharaoh Hop’n’khamun! I also used a fair amount of Chinook hops, my favorite, to give it a nice resiny taste and aroma. To boost that herby resin quality, some crushed juniper berries go a long way too! I learned that the hard way. I added 0.5 oz crushed juniper berries to the secondary fermenter (like a dry hop), but I kinda forgot about it and let it sit for about 2 weeks. Next time I’ll let it sit only as long as the Chinook dry hop (about 3 days).

But do I really want to deal with extracting the juice from a bunch of pomegranates? No. Enter Pom juice. 100% pure pomegranate juice with no preservatives or any other kinds of additives. Perfect. How much for a 5 gallon batch? At what stage do I add it during the brewing process? Do I need to add it to the boil to sanitize it? Will that eliminate some of the flavor if the sugars ferment away in the carboy? If I add it shortly before bottling or kegging, will the sugar in the juice contribute to carbonation and yield over-carbonated beer? Poking around on homebrew forums yielded conflicting advice. I settled on adding 40 oz of Pom to about 4 gallons just before kegging. That turned out to be too much for my taste. Next time I’ll use only half that amount. Maybe 24 oz for 5 gallons.

So, based on some trial and error, next time I brew Pharaoh Hop’n’khamun, here’s the plan:

Here’s the link to view my recipe on Beersmithrecipes.com:

And check in on Untappd: