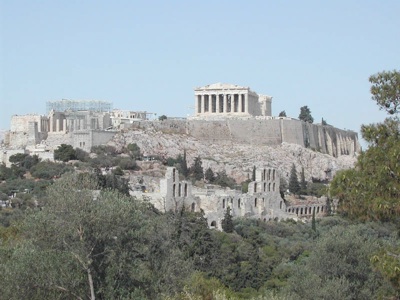 Welcome back to the SCARABsolutions Ancient Art Podcast, your guidebook to the Ancient Mediterranean World, picking up where Pausanias left off.

First a brief technical note. After publishing episode 10, I discovered that the video quality was a little messed up on some computers. So, I fixed that and republished episode 10, The Parthenon Frieze, Part 1. So if you weren’t happy with the way episode 10 was looking on your computer, head on back over to scarabsolutions.com and watch it again or re-download it with whatever podcast client you’re using, like iTunes. To redownload it with iTunes you’ll need to visit the podcast’s homepage in the iTunes Store. The easiest way to do this is to go to scarabsolutions.com and click the “Visit in iTunes” link. Wait for iTunes to load and then click the “Get Episode” button next to episode 10. Hey, and while you’re there, why don’t you post a review. You’re review will help others decide whether or not to bother listening and it’ll help to let me know that the podcast isn’t going unappreciated.

In episode 10 we learned about the Elgin Marbles, the Parthenon frieze, and what’s the same and what’s different between the two. In a nutshell, there’s some crossover between the two, but each term refers to its own collective body of artwork. The Parthenon frieze is a work of art conceived and executed in the 5th century BC, whereas the Elgin Marbles is a hodgepodge collection of sculpture from the Acropolis now in the British Museum. We also began to explore how Athens came to adopt the role of Empire over the eastern Mediterranean after the defeat of Persia, who had previously ruled the Ionian Greek city states of Asian Minor. And with no previous imperial model for Athens to emulate other than her enemy, Persia, ironically Athens came to model herself after that very Persia. We can see this direction manifesting in Athenian artwork of the time, namely the Parthenon frieze, when closely compared to the Apadana reliefs at the Persian capital of Persepolis. But how can we begin to make a comparison between the Persian Apadana reliefs and the Athenian Parthenon frieze? First we need to establish some evidence for a vehicle that carried this influence from Persia to Athens and we find this vehicle in the roots of the Ionic frieze and its Ionian artists.

Let’s start by exploring the role of the Ionian Greeks at Persepolis. Ionia, if you’re not completely familiar with this term, was the region comprising of culturally Greek nations along what’s now the western coast of Turkey. So, the role of Ionian Greeks at Persepolis. To put things in perspective, we need to understand that the employment of eastern Greek, specifically Ionian, craftsmen in the Near East was far from an isolated event at Persepolis. When Ionia was part of the Persian Empire, they enjoyed good relations and strong trade with the many surrounding Near Eastern nations. There’s significant evidence that Ionian artistry was a big influence throughout much of the Near East, particularly in Asia Minor. Asia Minor: that’s the name we use for the Turkish peninsula specifically in ancient times. One such example of Ionian influence in Near Eastern art can be found at Xanthos in Lycia, where we find the so-called Harpy Tomb from about 480 BC, about 30 years before construction began on the Athenian Parthenon. The artists at Xanthos were clearly representing Near Eastern themes in a distinctly Greek design. To culturally define Lycia at this time may be a slippery slope. While there’s a tremendous Ionian Greek cultural influence, Lycia was undoubtedly perceived of as being somewhat alien to mainland Greek culture. There was also a tremendous Near Eastern cultural presence here, not only from the Persian occupation since about 540 BC, but from millennia of close relations and proximity to the Ancient Near East. So, while the funerary offering or tribute scene that we see on the Harpy Tomb may seem foreign to an Attic or Athenian audience, Ionians were pretty familiar with this sort of thing on account of their long-standing occupation under Persia. The Harpy Tomb exemplifies the hybridization of Ionian and Near Eastern culture and artistry. While many details of the subject matter and the composition of the scene as a whole definitely are not Ionian or any kind of Greek, the figural style could easily be lifted straight out of contemporary Ionian relief art. Considering the subject matter, though, the audience that commissioned this work was probably leaning culturally a little more towards the Near East or Persia rather than Greece. The tomb’s occupant, in fact, is thought to have been the Lycian warrior king Kybernis, who Herodotus tells us was the leader of the Lycian contingent in the Persian army of Xerxes against Greece. At Xanthos and sites further east, Ionian trade artists worked with their own familiar technique, yet under a Near Eastern iconographic program, and you can imagine that the Ionian style could, in turn, have been influenced by the multicultural association, if not formally then perhaps thematically. Xanthos and the Harpy Tomb reliefs offer us a sensible medium between the two wide-spread Ionian projects that we’re focusing on here: the Persepolis Apadana reliefs, with their extremely Persian formal quality, despite whatever apparent Ionic influences, and the Parthenon frieze, the defining work of the High Classical Greek style, despite whatever apparent Ionic influences.

Perhaps the most relevant precedent for the association of Greek and Near Eastern art and architecture, if we’re going to establish a connection between the Apadana reliefs and the Parthenon frieze, is the employment of Ionian Greek artists at Persepolis, itself. Construction at Persepolis, the new capital city of the Persian Empire, spanned the reigns of three Achaemenid rulers and lasted over fifty years. The Achaemenid Dynasty, which ruled Persia from 559 to 330 BC, gets its name from Achaemenes, the possibly legendary chieftain of the Persians from around 700 BC. Construction began at Persepolis in 518 during the reign of Darius I, continued through the reign of his son Xerxes, and finished under Artaxerxes I around 460 BC. Traditional scholarship on Persian art maintains the theory that the Persians, having been of nomadic cultural origin and having had no style of monumental art of their own, saw the solution of importing foreign craftsmen from throughout their empire and amalgamating their styles under the direction of Persian aesthetic and iconographic desires essentially to invent a new Persian style of monumental art. As the noted Near Eastern scholar Henri Frankfort translates in The Art and Architecture of the Ancient Orient, the very words of Darius I on his building inscription at Susa provide convincing evidence for Ionian craftsmen being employed by the Persian imperial regime:

A great god Ahuramazda, who created this earth … who made Darius king. … I am Darius. … This is the palace which at Susa I erected. From afar its ornamentation was brought. The cedar timber … from [Lebanon] was brought; … from Babylon the Carians and Ionians brought it to Susa. … The stone-cutters who wrought the stone, those were Ionians and Sardians. The men who wrought the baked brick, those were Babylonians.

These excerpts from the building inscription demonstrate that Darius divided up the labor of constructing his palace at Susa among the vassals of the Persian Empire. And if Darisus’s admission isn’t evidence enough for Ionian Greek artisans being employed at Susa and contemporary Achaemenid sites, we also have unmistakably Greek-style graffiti etchings upon the base of a figure of Darius. These heads of bearded men are stylistically identical to contemporary Greek vase painting of around 510-500 BC. If you’ll permit me to get a little speculative, one might imagine an Ionian artisan, weary of adhering to the stiff, repetitive, rigid Near Eastern style of representation he’s been confined to by his Persian taskmasters, as having taken leave of his conscription for a few minutes to play with the more realistic, experimental, organic style near and dear to his subjugated homeland.

We could go on for quite a bit here about the minor Ionian Greek influences on the Persian artistic style, which can be see in the Apadana reliefs at Persepolis, but that’s not the point of our discussion here, and for the sake of brevity, let’s cut out that part. If you’re interested in learning more about that, remember to plug in over at SCARABsolutions.com and check out the bibliography in the Additional Resources section. In addition to the section on the Athenian Acropolis, I also added a section specifically on Persia and her relationship with Greece. But if I were to take the time to explain how the Apadana reliefs employ a sophisticated, fluid, distinctly Greek “Severe” style of rendering drapery in the quintessential archaic zigzag pattern, this would provide strong evidence for effective interaction and on-going intellectual exchange between Greek and Persian artisans, but I’m not going to go into that. And altogether, the Greek influence at Persian sites was quite limited, perhaps so as not to misdirect the propagandistic mission of Persian imperial art. Interestingly, only the drapery of figures representing Persians were rendered in the foreign Greek style-not the Medes or the Lydians or other foreign tribute bearers-hmm… It’s thought that the Apadana reliefs represent the celebration of Nauroz, the Persian New Year’s festival. During Nauroz the nations of the empire brought their tribute to the Persian king. Here we see tributaries from the subject nations bearing gifts in a ritual procession to the Persian court.

Persian policy towards her vassals wasn’t limited to conscripting their craftsmen and demanding an annual tribute. After conquering the Lydian Empire, Persia is thought to have invaded various island states and seized members of the Ionian citizenry to serve the king at home. All in all, Persia was a pretty tolerant ruler, but she tended to interfere with Ionian politics, as could only be expected of any occupying nation. Ionian cities seemed to enjoy prosperity and trade with the many neighboring nations, which were also or soon to be subject to the Persian Empire.

So, we’ve taken a look at a few examples of Ionian artisans being employed throughout Asia Minor and the Near East-on the Harpy Tomb at Xanthos and at Persian sites like Susa and Persepolis. We’ve also briefly explored how the Ionian Greek artistic style-with its increased attention at representing a dynamic and naturalistic quality to the human form and drapery in comparison to the traditional style encountered in Near Eastern art-how that’s crept into the new art of the Near East during this new era of a sort of globalization in the Persian Empire. We see this to a minor extent at Persepolis and even more so on the Harpy Tomb at Xanthos, where imperial aims don’t trump artistic innovation. In this new global climate, as artisans and other international citizenry are flung far into foreign lands, the cultural and intellectual exchange between Ionia, Persia, Lydia, and other neighboring nations could have been nothing short of profound. And as we turn our eyes westward, we’ll find these same Ionian artists later bringing their diverse experiences and influences with them to the new Empire of the Mediterranean: Athens.