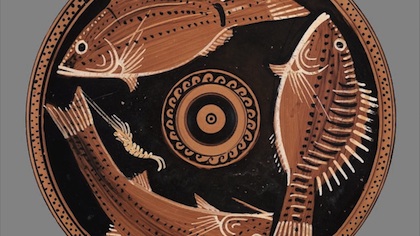 That’s a play on the title of the book Courtesans and Fishcakes: The Consuming Passions of Classical Athens by James Davidson. [1] Don’t worry. We’ll get to the courtesans a little later on, but an often overlooked curiosity in the lineup of ancient Greece ceramics is the fish plate. Short in stature compared to the looming amphorae and cavernous kraters, the fish plate packs a punch as an interesting cultural anomaly.

The basic shape of the fish plate is called a pinax (πίναξ) or pinakion (πινάκιον), meaning a small plate or dish, which goes back in undecorated form to the Bronze Age. [2] It’s not the most ridiculously popular form of ceramic from the Greek world. There are about 1,000 known examples of decorated fish plates in collections today and they all date to the Classical or Hellenistic period, not earlier. [3]

Many fish plates make heavy use of added pigment in various colors, especially white, and especially the fish plates from southern Italy. About 80% of the known fish plates are from southern Italy of the 4th century BC. [3] The Italian regions of Apulia, Calabria, Campania, and Sicily, known as Magna Graeca, or “Greater Greece,” were Greek colonies established as far back as the 8th century BC. The Greeks had a big appetite for fish, but the Greeks of Magna Graeca developed this appetite into a culture, an art form, and an obsession. The earliest surviving cookbooks from ancient Greece hail from Sicily and praise a fish diet. While there are no surviving Athenian cookbooks, there’s plenty of theatrical evidence that fish were widely consumed. [4]

I don’t think it’s far off to say that just about every edible species of sea creature found in the Mediterranean was consumed in ancient Greece. Depicted on the fish plates are just some of the many creatures that would have found themselves on Greek dinner tables. The decent collection of fish plates in the Art Institute of Chicago depicts bream, perch, torpedo fish, wrasse, some sort of crustacean, and red mullet (readily recognizable by its double dorsal fin). Fun fact number 1: the torpedo fish gets its name from … anybody … ? No, not because it’s shaped like a torpedo, which I’m not sure you’d win that argument. No, “torpedo” comes from the Latin torpere meaning “to be stiffened or paralyzed.” The torpedo fish is an electric ray, which can paralyze its victims. The modern munition torpedo gets its name, because it’ll make your boat dead in the water, like paralyzed prey. Fun fact number 2: this plate in the Art Institute comes from Athens. [5] This one’s south Italian. [6] We already learned that south Italian plates have a penchant for added colors. What else is different? On south Italian fish plates, the fish bellies are facing inward. On Attic plates, they’re facing outward.

The creatures are rendered with such detail that it’s actually possible to identify their species. Not being a professional angler, though, sometimes I just have to take their word for it. But even the dunce in me can identify some critters, like this octopus in the Boston Museum of Fine Arts or this cute little shrimp. Other popular fish were mackerel, crayfish, sea-bass, and grouper, just to name a few. Small fish like anchovies and sprats, were generally less popular, considered suitable only for beggars, freed slaves, and peasants. Among the absolute favorites were tuna and eel. [7] For somewhat obvious reasons, freshwater fish are less attested in the cuisines of seaside Mediterranean territories.

Fish plates look fairly thick, but that’s an illusion. The lip folds down to form a rim overhanging a narrow tapering foot. While the foot is generally not terribly tall, that may still help to elevate the plate above the surrounding items on a table for easy picking. And if you’re ever invited to an ancient Athenian dinner party, it’s good to know that it’s customary to take fresh fish with two fingers, while one should use only one finger to take salted fish. [8]

Notice the surface of the plate slopes inward like a shallow bowl. What do you suppose that depression in the center was used for? One of the most popular culinary staples from the Greco-Roman world is a substance called garum. Composed of salted, fermented fish blood and guts left out in the sun for a few months, this liquified item was called for in nearly every Roman recipe and it held essentially the same place at the table as our modern table salt. [9] While that may not sound terribly appetizing, you can readily find a multitude of fish sauces in Asian food markets today as well as some European counterparts, which range in their approximation to ancient garum.

It’s often suggested that the central depression on fish plates would be ideal for placing garum or one of its derivative saucy dipping condiments, but I’m not aware if any chemical analysis on fish plates has turned up the microscopic residue of garum or any remnant of fish, for that matter, which brings up an interesting debate. The debate rages today, inasmuch as a debate may rage over ancient fish plates, whether fish plates were used in daily life or were strictly funerary. Supporting that they were just funerary and were not actually used in daily life are the arguments that they were only made for about a half century or so during the 4th century BC. If it were a type of daily ware and not a passing funerary fad, don’t you think you’d find it throughout much of the archaeological record? And most fish plates have been discovered in a funerary context, but that’s not proof one way or the other; that’s just indicative of a skewed archaeological record. In general, many more funerary artifacts have been excavated than objects from daily life. Maybe the strongest argument against their daily use is that, curiously, fish plates frequently have cracks in the central sauce holder not from wear and tear over time, but as a result of firing, which pretty much defeats the functional application of the depression as a sauce holder or reservoir. [10] Or were these just rejects suitable only for burial?

The fish plate is also perhaps the only type of decorated vessel from ancient Greece that was dedicated to the consumption of a specific type of food. All the other popular vessel types were for drink. Considering the Greeks’ ridiculous obsession with seafood, though, I wouldn’t put it past them that this would be their one and only vessel type dedicated to the consumption of food as opposed to drink. Fish played a very different role in Greek cuisine from other forms of meat. Meat in ancient Greece was traditionally accessible, distributed, and consumed as a result of sacrifice to the gods. Meat was a sort of communal food, partitioned by the priesthood after the gods got their portion of the fat and bones. Fish is almost never mentioned as a sacrifice, perhaps with the exception of Poseidon, god of the sea, and then it was generally very bloody fish, like tuna. So, fish may have been seen as a luxury, an unnecessary indulgence that served no spiritual purpose, which may help explain all the conspicuous attention fish get in literature and art. There’s also little to no appearance of fish in Athenian culture until the Classical and Hellenistic eras. All that put together, fish was a peculiarly secular and distinctively, decadently modern food. [11]

Tied into its nature as a luxury good, fish was sometimes exploited as a metaphor for seduction and sexuality. Some ancient vessels depict the giving of fish as gifts to beautiful boys and hetaera, a.k.a. courtesans or fancy prostitutes. [12] The Hellenistic-era Athenian speech writer Hyperides, mentions there were two sisters popularly known as the “anchovies” on account of their pale complexions, slender figures, and large eyes. [13] Flute girls and courtesans received nicknames like Sand-smelt, Red Mullet, and Cuttlefish. [14] One can only imagine the comedic gold Greek authors might have enjoyed with the double meaning to phrases like “bait my hook” and “go fishing.” [15]

Well kids, I hope that gives you some new insights into an often-overlooked and under-appreciated member of the pantheon of Greek ceramics. Check out ancientartpodcast.org for high-res images and credits, transcripts for every episode, footnotes, an extensive bibliography, and links to other online resources. Connect with the podcast at facebook.com/ancientartpodcast and tweet to me on Twitter @lucaslivingston. You can email me your questions and comments at info@ancientartpodcast.org or fill out the Feedback form on the website at feedback.ancientartpodcast.org. And the best way you can support the podcast is to leave your comments on YouTube and iTunes. Thanks for tuning in and see you next time on the Ancient Art Podcast.

[8] Plutarch Moralia, Chapter VI “That Virtue May Be Taught,” Section ii, p. 94: “Moreover tutors teach boys to walk in the streets with their heads down,208 to touch salt fish with one finger only, other fish bread and meat with two, to scratch themselves in such a way, and in such a way to put on their cloak.” <http://www.gutenberg.org/files/23639/23639-h/23639-h.htm> Retrieved 29 November, 2011. See also Courtesans and Fishcakes, 22.

[10] Kozloff, Arielle P. “Two South Italian Vases: Fish Plate and Frog Bottle.” The Bulletin of the Cleveland Museum of Art, Vol. 73, No. 10 (Dec., 1986), pp. 406-414. <http://www.jstor.org/stable/25159967> Other arguments promoted by this article against fish plates having been used in daily life include that they would have been awkward to hold, not having any handles, and sometimes the real-life versions of the fish depicted on them would have inconveniently overflown the area of the plate. Also, some subjects depicted on the plates would certainly not have been consumed, like dolphins and hippocamps.

[14] Davidson 10, possibly from Archippus, Athen. 301A, 315B (see note 16 here: http://penelope.uchicago.edu/Thayer/E/Roman/Texts/Athenaeus/8B*.html#note16 Retrieved 29 November, 2011.). Additional examples of fish as sexual metaphors and nicknames are found in The Deipnosophistae of Athenaeus, Book VIII.337B-347C (Vol. IV of the Loeb Classical Library edition, 1930, p. 40-41): “And when Antiphanes says that Pythionica loved smoked fish, he meant that she had as her lovers the sons of the smoked-fish seller Chaerephilus. So Timocles says in The Icarians: ‘Whenever that bloated Anytus goes to join Pythionica and eats something. For she always invites him, so they say, when she entertains the sons of Chaerephilus, those two mighty mackerels whom she likes.’” <http://penelope.uchicago.edu/Thayer/E/Roman/Texts/Athenaeus/8B*.html#ref23> Retrieved 29 November, 2011.