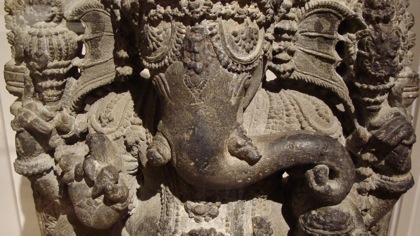 Welcome back to the Ancient Art Podcast. I’m your host, Lucas Livingston. Back in episodes 17 and 31 of the podcast we met Ganesha, the much-beloved elephant-headed Hindu deity, son of Shiva and Parvati. There’s such a rich spiritual, narrative, and artistic tradition surrounding Lord Ganesha, that this delightful pot-bellied fella deserves some more attention. It’s especially poignant now as the annual celebration of Ganesh Chaturthi, the 11-day festival of Ganesha’s birth, has just come to a close. Based on the lunar calendar, Ganesh Chaturthi fell in 2010 on September 11-22. In this popular festival celebrated throughout much of India and in Hindu communities across the world, devotees flock to temples to pay their respect to Ganesha. Huge statues of the god are paraded through the streets with singing and dancing. Temple icons receive offerings of candy, incense, flowers, money, and food, especially coconuts and bananas. On the first day of the festival on September 11th, if you looked carefully, you might even have found some offerings placed at the feet of Ganesha in the museum galleries of the Art Institute of Chicago.

Revered as a god of wisdom, prosperity, and good fortune, Ganesha is also the Lord of Beginnings and is commonly honored at the start of an assembly, celebration, or undertaking.

He’s extraordinarily popular today, particularly in centers of urban culture and commerce both with the upper and lower classes. It was his attribution as “the god of Everyman” that led the Indian nationalist Lokmanya Tilak in 1893 to transform the Ganesha Chaturthi festival from a private household event into a grand public celebration. It was an attempt to build a new grassroots unity between the Brahmin and the non-Brahmin classes through a mutual context. At that time during India’s period of British occupation, Ganesha became something of a rallying point for the population’s nationalistic identity. [1]

The Art Institute has a few spectacular images of Ganesha on display. A couple great ones from the 10th century and the 16th or 17th century expressively represent the many-armed god dancing. You often see Ganesha getting down, and rightly so. Kids love to dance, and Ganesha’s no exception. This cheerful child of Shiva and Parvati has a rather unusual birth, which also helps to explain how he happened to get the elephant head. People of any age can enjoy exploring the story of how Ganesha gets his head in Curious Corner, an series of interactive stories and games available online and in the Family Room at the Art Institute. Check out the links section at resources.ancientartpodcast.org for the link to Curious Corner. Some listeners might also remember the kid’s exhibition from a few years ago, Faces, Places, and Inner Spaces, where you could listen to a recording of kids telling the story. [2]

The beautiful thing about the Hindu narrative tradition, as with many other narrative traditions, is that you find different versions of the same story, but the story for how Ganesha got his elephant head usually begins with his parents Parvati and Shiva. When Shiva, the Supreme Yogi, would go off on long periods of spiritual exploration and meditation high in the mountains of the Himalayas, poor Parvati began to feel very lonely at home in their palace on Mount Kailash.

“While taking a bath, Parvati washed the dirt from her body and used it to form a baby boy. As the years passed, the boy grew into a young man, who did not know his father, but loved his mother so much, that he wanted to help her in every way. One spring morning, Parvati asked her son to stand guard at the entrance to her bath. A stranger approached and tried to enter, but the young man blocked his way. In a fit of anger, the stranger attacked Parvati’s son and ripped off his head. Hearing the commotion, Parvati quickly stepped out of her bath and opened the door. There she found her son without a head and her husband Shiva, the stranger, who had returned from his long journey. Although glad to see her husband, Parvati was filled with sorrow at the sight of her son. Realizing the grief he caused, Shiva promised to replace the head with that of the first creature he could find.” [3]

So Shiva rounded up the ganas, little leprechaun-like creatures that served Shiva. “Alright, gang,” he said, “We have a task. I want you to spread out and bring back the first head you come across.” The ganas dutifully went out in search of a head and came upon an elephant. The story generally seems to gloss over what happens to the elephant, but they bring back the head. Shiva places the head upon the lifeless body of the boy, he springs back to life, and is henceforth known as “Ganesha,” Lord of the Ganas, because Ganesha is now in charge of the ganas. He’s also known as the Remover of Obstacles, because, well, not a lot is going to stand in the way of an elephant, but also ganas, much like leprechauns, can be mischievous little pranksters or good luck and good fortune. If you offer Ganesha the right puja or prasad — gifts — then he’ll part the obstructive ganas from your path.

Perhaps my favorite image of Ganesha at the Art Institute is this fabulous 11th or 12th century figure in the James and Marilynn Alsdorf Collection. It comes from the period of the Hoysala Empire of south central India (roundabouts present-day Karnataka). You can think of Hoysala as the Baroque, or almost Rococo period of Indian art, with its abundance of ornamentation and intricate detail. Note the magnificent jewelry draping Ganesha’s body, the swooping rosaries, and splendid crown. Look at his fantastic mace and I love the way the artist has rendered Ganesha’s ears with the jagged cuts, almost like bat wigs. It’s made of chloritic schist. No, “schist” isn’t a bad word. It’s a kind of soft stone, or simply soapstone. You can say “schist,” as long as you use it respectfully.

Ganesha greatly enjoys all the sweet candy prasad that we give him, and he has a real sweet tooth. You’ll often find him dipping his trunk into a bowel of small round sweets. One of his tusks is often missing. No, not because of a cavity. There are a few different stories for how Ganesha lost his tusk. One rather pious version mentions the great Vedic sage, Vyasa, the traditional author of the Mahabarata and also a character in that same Hindu epic story and spiritual work. The Mahabarata had never previously been written down. It had been passed down from generation to generation through oral tradition. Ganesha heard that Vyasa was going to recite the Mahabarata and he thought that this would be an excellent opportunity finally to transcribe the work. As it happened, though, Ganesha was the only spectator at the moment … and, well, it appeared that Ganesha forgot his pen. So what does he do? He breaks off one of his tusks and uses it as a pen to transcribe the Mahabarata. Notice how Ganesha is missing both of his tusks here. One is nicely rounded and decoratively capped like a domesticated elephant might have, reminding us of his very urban cultural context, while the other is more deliberately broken off and Ganesha is actually pinching the broken piece like a pen in one of his hands.

Another story for how he lost his tusk has Ganesha going out for a joy ride on his friendly “vahana” or “vehicle,” his rat companion, who we met briefly in episode 17.

“One evening, after eating a very large bowl of sweets, Ganesha was riding on his vehicle, the rat, when a snake crossed his path. The rat bolted away in fright throwing Ganesha onto the ground. When he fell, the impact caused his stuffed stomach to burst open, and all the sweets rolled out onto the ground. Patiently, Ganesha picked up the sweets and put them back into his belly, using the snake as a rope to hold them all in. The moon, who had seen this unfortunate accident, burst out laughing. Ganesha became embarrassed, so he snapped off his tusk in anger and hurled it at the moon to teach it a lesson for laughing at another’s bad luck.” [3]

… And in case you’re wondering, that’s where are the craters on the moon come from.

A few minutes ago we were discussing the 1893 transformation of the Ganesha Chaturthi festival. Something else significant in 1893 was the speech delivered by Swami Vivekananda at the World’s Parliament of Religions during the Columbian Exposition in the building that, one year later, was to become the Art Institute of Chicago. On September 11th, 1893, Swami Vivekananda delivered a short speech on universal tolerance of world religions and helped introduce the West to Eastern thought and spirituality. You can download the speech on the Art Institute’s website as part of the special exhibition Public Notice 3 by contemporary Indian artist Jitish Kallat. You’ll find the link at resources.ancientartpodcast.org. The exhibition on the risers of the Art Institute’s Grand Staircase displays lines from Swami Vivekananda’s famous speech in colorful LED signage. The installation opened on September 11, 2010. It juxtaposes the September 11, 1893 message of religious tolerance with the acts of global terrorism on September 11, 2001. The colorful installation further explores the world’s arguable regression from religious tolerance by using the colors of the Homeland Security threat level alert system. The exhibition will be on view until January 2, 2011. I encourage you to swing by and check it out. While you’re visiting, be sure to pay a visit to the many images Ganesha and perhaps offer him a little puja for the many obstacles we currently face.

Special thanks to the Art Institute of Chicago for the Ganesha stories from the “Faces, Places, and Inner Spaces” exhibition.