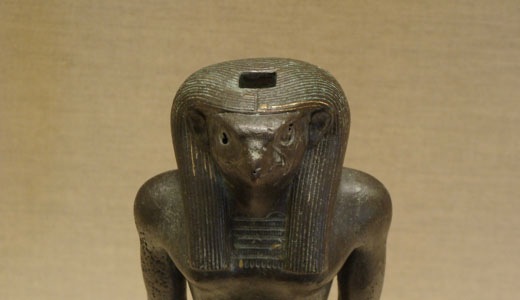 Thanks for coming back to the SCARABsolutions Ancient Art Podcast. As always, I’m your host, Lucas Livingston. In this episode, I want to discuss some of the basic formal concepts of Egyptian statuary. To do so, we’ll look at this standing figure of the Egyptian god Ra-Horakhty from the Art Institute of Chicago, whom we briefly met in episode 1, if you may recall, on the scarab in Ancient Egypt. Ra-Horakhty was a particularly prominent Egyptian deity, attested to certainly as far back as the Old Kingdom. He’s what’s referred to as a composite deity, which is a union of two or more gods into a single cult, like Ptah-Sokar-Osiris, whom we met in episode 4 on the Statue of Osiris. Incidentally, I encourage you to check out the Art Institute of Chicago Musecast for June of 2008. Here you’ll find a short discussion of the science behind the coloration of the Statue of Osiris and a bit on its history and conservation. You can get to the Art Institute Musecast by clicking on its logo in the Additional Resources section at scarabsolutions.com. Back to the concept of the composite deity, we also call this union or merging of religious and cultural systems “syncretization.” Now, there’s a good $5 word to stick in your pocket. Ra-Horakhty is the synchretization of two well known Egyptian gods, Ra, the falcon-headed god of the sun, and Horus, the falcon-headed god of kingship, son of Osiris and the god manifest on Earth as Pharaoh. Fortunately, in the case of Ra-Horakhty, the Egyptians didn’t have to debated long over which head to use. The “akhty” part of Ra-Horakhty means “horizons,” so his name is literally “Ra, Horus of the Two Horizons,” the two horizons, of course, East and West, being central to Egyptian spiritualism as symbols of birth and death. The cult of Ra exerted such a strong influence over other Egyptian religions that many different deities found themselves getting syncretized with him. For example, maybe the most well know Egyptian composite deity is Amun-Ra, the massively influential cult of Karnak and Luxor during the New Kingdom and Third Intermediate Period.

This figure is made of bronze and is what’s known as a votive figurine. He’s about 25 cm or 10 inches tall and is dated to the Third Intermediate Period, some time from 1069 to 656 BC. Originally he almost certainly stood on a squat rectangular pedestal, like many of the other bronze votives on display next to him, and he also had an elaborate crown. You can tell because of the little hole on the top of his head where the crown, crafted as a separate piece, would have been inserted, but that crown is now lost. A votive figurine is a fairly common type of statuette found, well, now in a museum … but before that often buried somewhere within the precincts of a sacred structure, whether buried by time, accident, or intention. “Votive” isn’t entirely unfamiliar to us now-a-days. That little tea light — the small candle lit to keep your tea pot warm — is often called a votive candle. A votive is any sort of devotional object given as an offering to a divinity, whether a candle or a gilded bronze figurine. A votive offering is a sort of contract with the god. You give your god a gift and offer up a prayer and in return, hopefully, that prayer will be recognized with a blessing of some sort, whether it’s the cure of an ailment, a healthy birth, a fertile crop, or whatever. And a votive also has the real-life practical function of providing the temple or church with a small bit of additional revenue. I think a prayer is up to a buck these days.

So, let’s examine the formal characteristics of the Ra-Horakhty. He’s exhibiting the classic, canonic Egyptian pose for the standing male. This essential form is exhibited throughout the history of Egyptian sculpture, from its inception well into the Greco-Roman era. Notice the broad straight shoulders, arms straight down to his sides, with clenched fists, as though he were originally holding something. Perhaps a rod of some sort or a small sash—two common attributes of office or station. Trace amounts of gilding survive on his kilt, wig, and necklace. Gilding is the fancy word for a thin gold leaf coating. Notice also that despite having the head of a falcon, he definitely has human ears, albeit humorously big ones pushed outward by the wig. Also, if you look really closely, you’ll see his magnificent vanity belt buckle. The gilding here is surprisingly intact. The hieroglyphs read Ra-Horakhty pet netjeru, which mean “Ra-Horakhty, chief of the gods.”

He’s pretty fit too. We may not see the most well-defined musculature, but he definitely has a slender, athletic, idealized, youthful form akin to representations of nearly all the gods and kings. But it’s not entirely realistic and that’s something important to consider. Look at his legs. The left leg is forward. That’s an incredibly recognizable feature of this archetypical pose. But he’s not exactly stepping forward, is he? Otherwise his arms would be swinging to maintain balance and his upper body would be leaning forward too. It’s a little hard to see here, since he’s stuck behind glass and we can’t get a good profile view, but if he were stepping forward in a true stride, his back leg would also be at an angle slightly behind his center of gravity, but that’s not the case here. His right leg is perfectly vertical along his central axis. Both feet are firmly planted on the ground too, so he’s clearly not in mid stride. But realistically what he’s doing is physically impossible without bending his knees and swiveling his hips. The left leg of the figure is actually a little bit longer than the right one, just long enough so that it can reach the ground.

But what’s all this mean? A lot of ink has been spilled on speculations about why the left leg of Egyptian statuary is forward … and it’s invariably the left leg. Is there some secret meaning behind the left leg? Is this an attempt at rendering dominance, a sort of political propaganda or is something else at work? Well, unfortunately we don’t benefit from the Ancient Egyptians drafting treatises on their art, as we do with later civilizations, but one widely accepted theory has to do with Egyptian hieroglyphs. You see, hieroglyphs can be written in nearly any direction, but they’re most commonly found written right to left. Here’s a neat trick if you ever want to know which direction the hieroglyphs are written. Look at the animals or people. They’re always facing the beginning of the sentence. So, commonly the figures are facing to the right, since it’s commonly written right to left. If we recall from episode 9 “Walk Like an Egyptian,” the salient characteristics of the human form are always visible in writing and in relief, so you always see the hidden back leg peaking out from behind the front leg. In a right-facing figure, the left leg then becomes slightly extended forward to be visible out from behind the right leg in the forefront. What’s this got to do with sculpture? Well, as we saw all over the mummy case of Paankhenamun in episode 2, hieroglyphic characters and principles are regularly adapted to reliefwork and three-dimensional sculpture. When seen in profile facing to the right, the Ra-Horakhty and countless other Egyptian statues in this divine canonic pose participate in the uniquely Egyptian experience of the written word being adapted to sculptural form.

I hope that made sense. Keep this pose in mind for next time as we turn our eyes to Greece and the origin of Greek statuary. Thanks for listening to the SCARABsolutions Ancient Art Podcast.