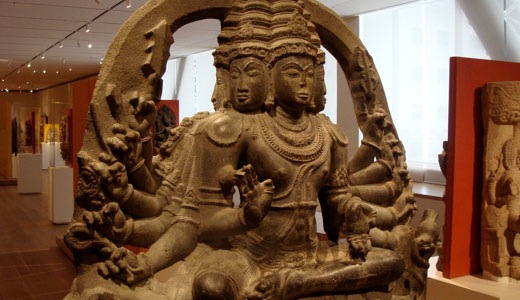 Hi everyone. Welcome back to the Ancient Art Podcast. I’m your host Lucas Livingston. You may have noticed … or maybe not … that the Ancient Art Podcast is now available on YouTube. Just head on over to youtube.com and search for “Ancient Art Podcast,” or go to ancientartpodcast.org and you’ll see the embedded YouTube video there. You also may have noticed the addition of an iPod-compatible format to the podcast stream. Much to my chagrin, after I finally bit the bullet and purchased a video-capable iPod (relegating my awesome first generation iPod to the drawer), I suddenly discovered, having had no test platform prior to this, that the high-definition Ancient Art Podcast doesn’t play on video iPods. What the heck! So instead of conceding quality to compatibility and downgrading the podcast, I thought it wise to offer both formats—HD and iPod—in the same stream, for your choosing. One looks great on a huge plasma screen, while the other fits nicely in your pocket. And for those listeners with the iPhone or iPod touch, the iPod version is what you’ll want to download directly to your device, not the HD version.

If you listen to MuseCast, the official audio podcast of the Art Institute of Chicago, you may have heard in the November 2008 episode about the grand opening of the Alsdorf Galleries, the new galleries of Indian, Southeast Asian, Himalayan, and Islamic Art. Well, the MuseCast episode gave you a brief audio introduction to the galleries and has a great interview with curator Madhu Ghose, but I’m so excited about this much anticipated installation that I want to talk about it myself … with pictures, no less.

If you’ve been to the Art Institute in the past year or so, you may have noticed that the famed corridor of medieval armor, weapons, and decorative arts has been removed, much to the dismay of rambunctious adolescents and nostalgic gamers. Don’t worry. It’ll be coming back in a different and even better display, but that space, the long corridor that spans the commuter railroad tracks, has undergone an incredible transition from the musty medieval hall to the majestic, colorful, day-lit corridor of South and Southeast Asian treasures. There’s quite a feast of artwork on display here, including some works that may be a little familiar to avid listeners, like the Gandharan Bodhisattva from episode 7 of the Ancient Art Podcast, now exhibited among a number of his Gandharan contemporaries. One remarkable architectural element is the installation of a long set of windows offering a sweeping panorama of the Art Institute’s new Modern Wing, Millennium Park, and the Chicago skyline north of the park. Bright natural light is okay in this gallery, because all the exposed works are statuary made of stone, bronze, or wood, and whatever paint they originally had on them has long since disintegrated. But so as not to be confronted by a plodding series of dull gray sculpture, broad swaths of color have been added among the casework, auspicious colors exemplary of the cultures that produced these works of art, like saffron, the color of sacrifice worn by the Buddhist monks of Tibet, yellow, the color of the Indian spring festival, and red, the color of traditional bridal dress. Color is a very important part of South and Southeast Asian life. Nearly all works surrounding us in this gallery were once originally vibrantly painted with a variety of colors and also originally draped in fine textiles. Some works even retain part of their original coloration; not so much those in the Art Institute, but some works even in-situ, like this 17th century granite sculpture of a divine marriage ceremony from the Madurai temple in Tamil Nadu in Southern India. Notice also the floral garlands draped over the figures. And in this 19th century Indian watercolor of priests worshipping the god Krishna, now in Australia. While it’s a 2-dimensional work, you can still get a sense of how the images of gods and goddesses were and still are today draped in extraordinary fabrics in Hindu and Buddhist temples.

The colored panels in the Alsdorf Galleries of Indian, Southeast Asian, Himalayan, and Islamic Art serve to remind us that these works of art surrounding us are now stripped out of their original sacred context. These magnificent works of sculpted stone and cast bronze, while being beautiful works of art in their own right, were not created for the purpose of being displayed in a museum behind airtight glass in a precision temperature- and humidity-controlled environment. These sacred works are consecrated icons of divine beings. As in Western traditions, an icon, or a work of art that undergoes a religious consecration, is literally thought to house the spirit of the divine form. It’s called the “eye-opening” ceremony, when the icon is unveiled and awakens with painted open eyes as the spirit of the divine enters the figure. In the original context of a temple or shrine, one would expect to encounter these sacred works, like this 12th century Indian statue of the Divine General Kartikeya, adorned with fine drapery, colorful pigment, flowering garlands, and all manners of religious offerings piled at his feet, like incense, flowers, food, and money.

This colossal figure is one of the centerpieces of the Alsdorf Galleries. He and the adjacent contemporary South Indian Buddha are hard to miss when passing through, but hopefully you’ll do more than just pass through. Hopefully you’ll even stop to enjoy these works on your way from the gift shop to the restaurant. The statue of Kartikeya exemplifies much of the rich iconography and symbolism of the Hindu tradition. The multiplicity of arms and heads reflect the celestial, superhuman quality of his divine form. (Although, to be very specific, the six heads on Kartikeya here actually refer to the story surrounding his mystical birth, six heads to nurse from his six foster mothers, but multiple heads is a common element of Hindu iconography.) Each of his hands holds some sort of ritual implement or weapon, each having a precise meaning. Like the lotus blossom (“padme” in Sanskrit) in one of his right hands, symbolic of enlightenment—the lotus flower rising from the murky depths of the marsh out of the darkness up to the heavenly light of the sun—also symbolic of the feminine energy of the human spirit. And the vajra, or thunderbolt, in his upper left hand, symbolic of the masculine energy of the human spirit. The lotus and vajra can be read together as a union, a balance, between our feminine and masculine sides. People aren’t one or the other. There’s a duality to us all. To reach nirvana, to reach an enlightened state of being, we need to strike an internal balance, a harmony of these forces within. To borrow something from the Far East, it’s like the yin and yang, a harmony in the unified circle of two swirling opposites. We also need to strike an internal balance between our compassion and wisdom. Interestingly, wisdom in the Hindu tradition is generally equated with femininity, whereas compassion is equated with masculinity … kinda opposite to the Western tradition.

Notice that two of Kartikeya’s hands aren’t holding anything. Those hands, instead, are striking very specific poses. It’s called a mudra. A mudra is a gesture that conveys a specific message. There are hundreds of different mudras, each having their own specific meaning. Mudras are employed throughout Hindu and Buddhist iconography and can be seen repeatedly among the statuary and paintings in the Art Institute’s galleries of Asian art. You’ll also come upon the widespread employment of mudras in classical Indian dance. What Kartikeya’s striking is very common. It’s actually two different mudras. His right hand with the fingers pointing up and the palm forward is the Abhaya mudra, the “gesture of reassurance.” With this mudra, Kartikeya is saying “fear not, rest assured, everything will be fine and I’ll take care of you.” Think of it like a hand stretched out to offer a reassuring pat on the shoulder. The mudra of his left hand is similar—palm facing out and fingers straight—but pointed down instead. That’s the Varada mudra, the “gesture of charity or compassion.” Think of it as a hand stretched out either asking for or receiving alms. So, these two mudras can be read together conveying a combined message of “Don’t worry, I’ll take care of you and everything will be peachy … so long as … you lead a good, charitable, and righteous life according to Dharma, the rule of law.”

Notice also the smoothly polished, blackened regions along his legs, whereas the rest of the figure is somewhat rough and pocked with a dull gray color. The figures is made of granite, an incredibly hard stone. You might think of your kitchen countertop with its smoothly polished finish, but that’s thanks to modern industry. Preindustrial granite statuary is generally not so smoothly polished. What do you suppose would cause this discoloration and extremely smooth polish? Well, talking so much about hands just a few seconds ago, how about hundreds of year of people touching him on his legs? Remember, many of these works were originally consecrated icons. To touch the icon will bring you all that much closer in touch with the divine. Of course, stripped from that context and now placed in a museum, whatever spirit once resided in the work has long since left and touching won’t do you any good and will just get you yelled at. Case in point, though, for why we don’t touch the art at a museum.

Something else that beckons our attention is his animal friend. What is that that he’s sitting on there? Some kind of bird, huh? It’s a peacock. That’s his regal mount, his trusty steed. In Sanskrit it’s called the vahana, from which we get the word “vehicle.” Many of the prominent Hindu deities ride a vahana. Kartikeya’s is the peacock. The god Shiva rides a bull named Nandi. The beloved, bulbous, elephant-headed god Ganesha rides a curious little vahana. It’s kinda hard to see at the base of this exquisitely-carved statue, but you can just barely make it out. It’s a rat! You see that the association of elephants and rodents goes back well into ancient times. And Vishnu rides a half-man half-eagle type of creature named Garuda. Sound familiar to anyone? How about Garuda Indonesia Airline? You see, these myths, stories, and divine beings are very much alive and well in the contemporary world. While the artwork we enjoy in the museum may be quite ancient and completely stripped from its original religious context, it’s helpful to recognize that these works are still very much applicable to contemporary culture. The iconography, attributes, individuals, and stories are expressed very similarly in traditional artwork produced today by people of these regions and cultures. So as you wander about exploring the ancient, medieval, and antique works from South and Southeast Asia, think of them not only as works from the past, but also as contemporary emblems of the panoply of global culture.

Thanks for listening. Don’t forget to visit ancientartpodcast.org where you’ll find credits for all the images used on the podcast, an extensive bibliography, links to other great resources, and recommendations from yours truly of other interesting podcasts. So long and keep on keepin’ on.