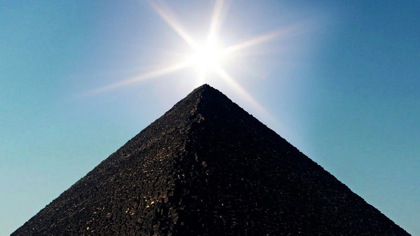 Sorting fact from fiction on the Ancient Art Podcast, we continue the countdown of the Top 10 Ancient Egyptian Myths and Misconceptions. I’m your host, Lucas Livingston. Coming in at number 8 in the countdown: “The Pyramids were Built by Slaves.”

As the nation of Egypt is currently in the midst of celebrating an historic moment of nationalistic pride and newfound civil freedom, we delve into an age-old myth that, for the past few generations, has been as much a political and nationalistic issue as it has been an archaeological one.

The idea that the pyramids of Egypt were built by slaves, be they the Israelites or the Egyptians themselves, has been around for a long time. Perhaps the earliest suggestion comes from the 5th century BC Greek traveler and historian Herodotus. Called the “Father of History” and also the “Father of Lies,” we already met Herodotus a few times in the Ancient Art Podcast. In Book 2 of his Histories, Herodotus states that “[Pharaoh Khufu] brought the country into all sorts of misery. He closed all the temples, [and] then, not content with excluding his subjects from the practice of their religion, compelled them without exception to labour as slaves for his own advantage. … A hundred thousand men laboured constantly, and were relieved every three months by a fresh lot. … The pyramid itself was twenty years in building.” Now, Herodotus visited Egypt around 450 BC — a full 2000 years after the building of the pyramids of Giza — and he got a lot of his information from the everyday person on the street in a culture where history was really more of a religious subject than a social science. And it was pretty unprecedented in the historical record of Egypt for Khufu to be bad mouthed like that. It’s often safe to take some of what Herodotus says with a grain of salt, but that passage does say very interesting things about how Herodotus’s contemporary Egyptians might spin a yarn to sell the pyramids to some foreign schmuck. Ah, the tourist industry in its infancy. At the very least, though, props to Herodotus for getting the pharaoh right.

The idea that the Israelites could have built the pyramids probably stems from the Book of Exodus, Chapter 1, Verses 11 to 14:

“[T]hey set taskmasters over them to oppress them with forced labor. They built supply cities, Pithom and Rameses, for Pharaoh. … The Egyptians became ruthless in imposing tasks on the Israelites, and made their lives bitter with hard service in mortar and brick and in every kind of field labor.” [1]

But you see there’s no mention of the pyramids there. Plus, there’s no archaeological evidence in Egypt supporting any of the narrative elements to the Book of Exodus: the centuries of enslavement and sudden departure of mass quantities of Israelites, let alone the ten plagues or the parting of the Red Sea. And the narrative places itself at the time of the New Kingdom, over 1000 years too late to have had any involvement with the building of the pyramids of Giza. Sure, the pyramidal tomb-shape continued to crop up across the Egyptian landscape for many more centuries, but those aren’t the pyramids anyone’s talking about.

The mention of the cities of Pithom and Rameses in Exodus 1:11 could refer to Pi-Ramesse (Per Rameses, “The House of Ramses”), the sudden and short-lived capital city of Seti I and Ramses the Great. If there was any conscripted Israelite labor in Egypt around the time of the New Kingdom, it probably would have been there, but again there’s absolutely no evidence to back that up either.

In the 1st century of the Common Era we find the earliest surviving actual account mentioning the Jews having built the pyramids. In book 2, chapter 9 of his history The Antiquities of the Jews, the Jewish historian Josephus includes pyramid-building among the hardships of the Jews in Egypt:

“Now it happened that the Egyptians grew delicate and lazy … [blah, blah, blah] … [T]hey became very abusive to the Israelites … [yadda, yadda] … [T]hey enjoined them to cut a great number of channels for the river, and to build walls for their cities and ramparts, that they might restrain the river, and hinder its waters from stagnating, upon its running over its own banks: they set them also to build pyramids, and by all this wore them out …” [2]

We can speculate that by the 1st century, the myth that the Jews built the pyramids could have been around for a long time and Josephus was as much a victim of assuming the truth as anyone else. One might argue, though, that Josephus, as a learned Jew familiar with the Exodus story, had a bit of a grudge against the Egyptians. He composed The Antiquities of the Jews in AD 93 or 94 under the patronage of Emperor Domitian almost as a sort of propaganda piece. Written in Greek, it was not meant for a Jewish audience, but rather for his gentile patrons and the Roman citizenry. This carefully sculpted and slightly Hellenized history of the Jewish people would have been more accessible to his Greco-Roman audience and sought perhaps to augment the reputation of the Jewish people in the public eye. That’s a common Classical literary form called an “apologia,” a speech or story in defense of someone or something, which is where we get the word “apology.” [3]

The archaeological evidence, however, points to something else. In August of 1990, an tourist was riding a horse just south of the Sphinx, when they stumbled over the remains of a mud brick wall. And this led to the discovery of the tombs of the pyramid builders. Dating to the late 4th and 5th Dynasties (2649-2374 BC), these tombs belong to workmen, who built the pyramids of Khufu and Khafre. It’s been argued that, since these people were buried beside pyramids of the kings, they’re unlikely to have been slaves. Had they been slaves, they would have been buried elsewhere and in common graves or pits, not real tombs like these. Tomb inscriptions include 25 unique official titles, like the “overseer of workmen,” “overseer of craftsmen & draftsmen,” and the “inspector of building tombs.” [4]

Furthermore, over the past couple centuries, excavations in and around the pyramids have revealed graffiti in places hidden away from view. The graffiti were made presumably by the pyramid builders, themselves. With names like the “Friends of Khufu,” “Drunkards of Menkaure,” and the “Starboard” and “Port” groups, these and other names are thought to designate the organizational structure of the pyramid builders, and that definitely doesn’t sound like slavery. [5]

According to modern estimates it took a workforce of 10,000-30,000 to build the Great Pyramid over the 23-year reign of Khufu. [6] With 2,300,000 blocks, that’s an astonishing one block every two minutes, but it’s doable. Evidence from the excavations of the workmen’s graves reveals daily shipment to the Giza plateau of 21 cattle and 23 sheep to feed the workers. [7] We’re talking prime rib, here! Not chit’lins and chicken feet! So, they were treated quite well. These are not pauper or slave tombs. But their skeletons do betray the difficulty of their labor — arthritis and injuries including dismemberment and death. [8]

Excavations continue on the Giza plateau spearheaded by Dr. Mark Lehner. Recent work focuses on unearthing the “Lost City” of the pyramid builders, which has revealed bakeries and a fish processing center. This is a really momentous period in history of discovery at Giza, as we slowly uncover the truth and learn to sort fact from fiction about the construction of the pyramids. [9]

[1] The HarperCollins Study Bible, New Revised Standard Version, 1989.
[2] Flavius Josephus. The Works of Flavius Josephus. Translated by. William Whiston, A.M. Auburn and Buffalo. John E. Beardsley. 1895. <http://en.wikisource.org/wiki/The_Antiquities_of_the_Jews/Book_II> and <http://www.perseus.tufts.edu/hopper/text?doc=Perseus%3Atext%3A1999.01.0146%3Abook%3D2%3Awhiston+chapter%3D9%3Awhiston+section%3D1>
[3] The myth that the Jews built the pyramids was further and more recently perpetuated by the erroneous claim of the former Israeli Prime Minister Menachem Begin on a visit to Egypt in 1977 <http://www.guardian.co.uk/world/2010/jan/11/great-pyramid-tombs-slaves-egypt>, and was suggested even more recently by Walter Cronkite in a 1980 interview with former Egyptian President Anwar Sadat. <http://www.berkshireeagle.com/columnists/ci_12887828?source=rss>
[4] See Mark Lehner’s The Complete Pyramids, page 232 (inset) & <http://www.drhawass.com/blog/press-release-new-tombs-found-giza>
[5] http://www.pbs.org/wgbh/nova/pyramid/explore/builders.html & Lehner, The Complete Pyramids, 52-53, 111-114, 224-225.
[6] The number ranges greatly depending on whether or not you include support staff in that count. For just the stone workers, Hawass estimates 10,000 <http://www.drhawass.com/blog/press-release-new-tombs-found-giza>, as does Lehner <http://www.pbs.org/wgbh/nova/ancient/lehner-giza.html>. For full number including the population necessary to support the 10,000-person workforce, Lehner estimates 20,000 people <ibid.> and also 20,000-30,000 in Lehner, The Complete Pyramids, 224.
[7] http://www.drhawass.com/blog/press-release-new-tombs-found-giza
[8] http://www.guardian.co.uk/world/2010/jan/11/great-pyramid-tombs-slaves-egypt
[9] http://www.pbs.org/wgbh/nova/ancient/lehner-giza.html

As an added bonus, check out the January 2010 NOVA episode “Riddles of the Sphinx” online http://www.pbs.org/wgbh/nova/ancient/riddles-sphinx.html

2 Replies to “37: The Pyramids Were Built By Slaves”