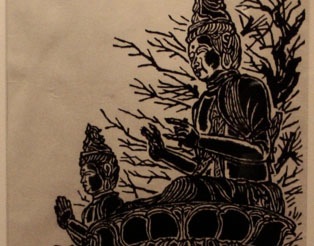 Welcome back to the Ancient Art Podcast. Hang on tight folks as we take another excursion a bit off topic in this episode to explore the art and life of one of the most influential 20th century Japanese woodblock print artists, Hiratsuka Un’ichi. An exhibition of Hiratsuka’s prints was recently on view at the Art Institute of Chicago through January 4th, 2010. And now that the exhibition is closed, so too are the Japanese art galleries as the Art Institute prepares for a grand reopening of the newly renovated Japanese art galleries in the Fall of 2010 called the Weston Wing. So be sure to head on down to the Art Institute in the Fall and check out the new Weston Wing of Japanese art.

The Art Institute has a particularly strong collection of prints by Hiratsuka Un’ichi, thanks largely to the generosity of the Van Zelst family, who were close personal friends of the artist and his family. All the prints on display in the exhibition were given to the Art Institute by the Van Zelst family and I recently had the extreme pleasure of walking through the show with the Van Zelsts, which was pretty inspirational for this episode of the podcast.

Hiratsuka Un’ichi was born November 17, 1895 and died on November 18, 1997 at the ripe old age of 102 and a day. (You know he was doing something right.) He grew up during Japan’s Meiji era, a time of tremendous globalization for Japan and a fascination with the Western world. In this new global climate, Japan found itself facing the decision of which aspects of traditional Japanese culture to save and how Japan’s culture would be redefined in the modern world. Through Hiratsuka’s early exposure to Western art and illustrations in his school books and through the rich Japanese cultural traditions surrounding him in his youth, Hiratsuka played a pivotal role in the modernization, preservation, and revitalization of the Japanese print artform.

You might be most familiar with colorful prints of kabuki actors, beautiful courtesans, and gentle landscapes from Japan’s classical era of woodblock prints of the Floating World, the Ukiyo-e, during the Edo Period of 1615-1868. There’s a great introductory video on Ukiyo-e prints and culture produced by the Brooklyn Museum for the 2008 exhibition Utagawa: Masters of the Japanese Print, 1770–1900. You can find it online at the long URL of brooklynmuseum.org/exhibitions/utagawa and you’ll find that link in the transcript of this episode at ancientartpodcast.org.

Going beyond the art of the Floating World, Hiratsuka was one of the early pioneers of the Creative Print movement, “sosaku hanga,” established in the early 20th century. He and a few other like-minded artists adopted the term “creative” or “sosaku” for their new print style to draw two clear distinctions from the tradition of Japanese woodblock printing. One, these artists had sole creative responsibility for their works from beginning to end, breaking down the traditional triangle of designer, carver, printer, in which three wholly separate individuals or workshops were traditionally involved in the mass-scale commercial printmaking process. And the second distinction to prints of the traditional sort, in their argument, Creative prints exhibit the creative self-expression of the artist. You could say that’s not entirely unlike their contemporary early 20th century European modernist artists and the earlier Impressionists, who were both significant influences for the Japanese Creative Print artists.

But if Creative Print artists were rebels against the established tradition of Japanese woodblock printing, then Hiratsuka Un’ichi was a rebel among rebels. Many of Hiratsuka’s fellow Creative Print artists strongly reflect the influences of Western Modern artists. Works by Yamaguchi Gen and Onchi Koshiro could easily be hung side by side with Paul Klee and Piet Mondrian. Hiratsuka, however, was deeply motivated by Japan’s ancient spiritual traditions.  As a young boy, Hiratsuka was surrounded by talented woodworkers on account of his father’s lumber business and his grandfather’s architectural career. He showed an early interest for black ink on white paper with a childhood fascination for carved wooden ink stamps. In his home town of Matsue, he grew up near the famous Shinto shrine of Izumo, in whose faith a reverence for the natural world is expressed through undecorated, unpainted wooden sculpture and architecture. Hiratsuka must have picked up on that purity of natural wood and built a career expressing his spiritualism through undecorated, uncolored, black ink woodblock printing. He also considered his art to be somewhat sacred by way of its roots in the earliest form of black ink printing of Buddhist sutras, spiritual texts, and sacred imagery. In early Buddhist printmaking, the keyblock was the authoritative, sacred template designed and carved by the master monk of the monastery. Then the master’s pupils would print and color the works by hand. So by distilling his art form purely to the keyblock, Hiratsuka paid a similar respect to his own black ink printing. Early in his career, Hiratsuka experimented with color printing, but he eventually decided that color weakens the emotional power of black ink on paper. Throughout much of his life, he was also an avid collector of early black ink Buddhist prints and, notably, antique temple roof tiles, both of which strongly inspired his art. [roof tile prints]

He also experimented with various carving techniques and instruments, including the tradition Japanese straight bladed woodworking knives and also Western curved U and V-shaped chisels. Side by side, some of his prints remarkably demonstrate the different results that the different tools can produce. Many of his prints also exhibit his trademark jagged or wavy lines produced from a unique rocking technique that he developed in strong contrast to the smooth, straight, hairline details of classical Floating World prints of the Edo period. Also unconventional in Hiratsuka’s style was that he executed much of the design process during the actual carving of the block, reworking the design and changing his mind along the way. Conversely, in the traditional triangle of designer, carver, printer, once you reached the carving stage of a woodblock, the design of the final print was completely determined. Hiratsuka is well recognized for having frequently worked in very large scale, carving all the way up to the very edge of the block of wood, but later also printed in a small postcard size so his work would be a bit more affordable and marketable. Whether working in large or small scale, though, Hiratsuka’s carving technique seems to reflect the tradition of ancient Buddhist stone rubbings, another early influence of ancient spiritualism for Hiratsuka, which we also see reflected in the style of one of his most prominent pupils, Munakata Shiko.

In 1962, Hiratsuka moved to the United States to be with his daughter’s family, but this change of venue didn’t slow him down. He continued to carve new blocks and make prints based on old sketches that he’d done sometimes even years earlier. He also explored the American landscape around him for inspirationional subjects. It’s interesting seeing so many of these Western subjects rendered in Hiratsuka’s multifaceted cosmopolitan style. For all of his achievements, Hiratsuka received multiple exceptional accolades. In 1970 the Japanese emperor awarded him the Order of Cultural Merit, which had never previously been awarded to print artist. And in 1977 Hiratsuka became the first artist ever to be awarded with the Order of the Sacred Treasure. Hiratsuka Un’ichi remains a modern master, who explored ancient tradition and contemporary innovation, motivated by deep spiritualism and globalization. He broke the rules of the rigidly predefined role of woodblock carver and inspired a new generation of artists.

If you want to learn more about the life and work of Hiratsuka Un’ichi, there’s a great catalog to an earlier special exhibition called “Hiratsuka: Modern Master” from 2001. Don’t forget to head on over to ancientartpodcast.org where you’ll find the photo gallery for this episode of the Ancient Art Podcast and many more. You can also visit an online virtual gallery of the exhibition that I put together using the Art Institute’s online collection database at http://tinyurl.com/hiratsuka2009.

I hope you didn’t mind the tangent of this episode breaking away from strictly ancient art. I’m excited to report that I’ll be going to Egypt early in 2010 as a study leader for an Art Institute travel program, so we can look forward to many interesting ancient adventures after I get back.

I appreciate your feedback and suggestions for future episodes. You can reach me at info@ancientartpodcast.org or with the feedback form on the website. You’ll find me on Twitter at lucaslivingston. And you can leave your comments on YouTube, iTunes, or on the website itself. Thanks for tuning in and we’ll see you next time on the Ancient Art Podcast.