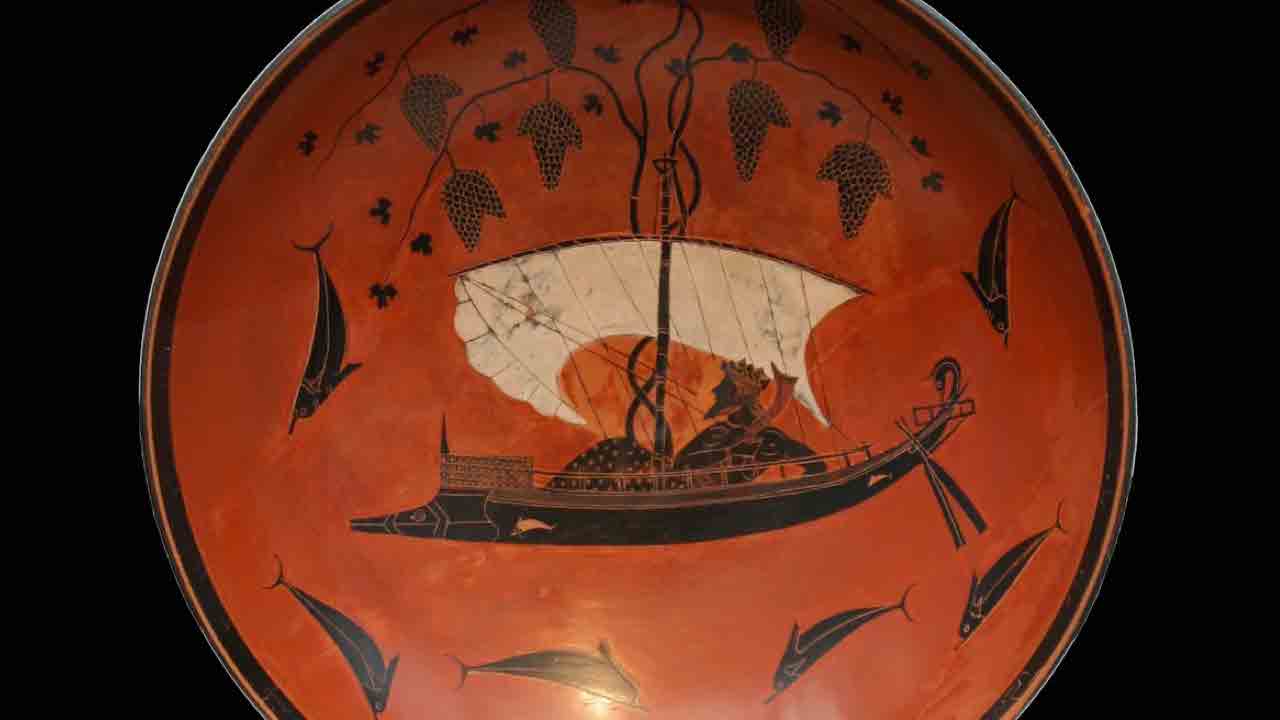 Avast ye scurrilous scaliwags! Welcome to me piratey Ancient Art Podcast. I’m yer crotchety captain, Bottoms Up Livingston. On ship’s deck we have the bounteous booty of the finest goblet from the sea swept island of Vulci, the cup of the god of wine himself, twice born of two mothers, master of madness, Dionysus. And with this cup comes the tall tale of the time when Dionysus was besieged by an unlucky band of outlaw pirates.

For some background on Dionysus, the ancient Greek god of wine, theater, ecstasy, and madness, check out episode 84, “The Birth of Dionysus,” at ancientartpodcast.org/84. There we meet Dionysus’s parents, the god Zeus and mortal Semele. We learn of her untimely fate, and discover why among Dionysus’s many nicknames we call him the twice born god.

Legends of the great god of wine and reverie are replete with suggestions of alcohol’s potent power as a transformative potion. One of my favorite tales of alcohol-induced magical metamorphosis is Dionysus and the Tyrrhenian pirates, which is beautifully rendered on an ancient Greek kylix wine cup, the so-called Dionysus Cup from around 540-530 BC by the master painter and potter Exekias.

Although he was the son of Zeus and part of the Olympian pantheon, the Greeks often considered Dionysus to be somewhat foreign and exotic, like some rich kid sent abroad to boarding school for most of his youth and now he wears a beret and scarf indoors. The god’s taste for foreign fashion often makes him stand out in a crowd and in this case, that gets him into a bit of a pickle.

Our earliest source for this fabulous legend of the god is the Homeric Hymn number 7, the hymn to Dionysus, from the 7th or 6th century BC. [1] We catch up with the Dionysus having gone for a pleasant stroll along the salty sea shore in the form of a handsome young man with rich, dark hair, dripping with exotic fineries and princely burgundy garb. Alas, a ruthless band of Tyrrhenian pirates sailing along shore happens upon the god and kidnaps him, believing him to be a wealthy prince, whom they could hold for ransom. A humorous detail added to the story some centuries later in Ovid’s Metamorphoses shares that Dionysus happens, unsurprisingly, to be punch drunk on wine at the time. “He seemed to reel, half-dazed with wine and sleep,” Ovid writes. [2] Once the pirates nab the god and escort him onto their ship, they seek to bind him to the ship’s mast. To their surprise, with uncanny magical ease the fetters fall away from the god’s hands and feet and he sits there with a wry smile in his dark eyes. Having at that moment the realization that their guest is not as he seems, the ship’s helmsman cries out to his mates: “Madmen! What god is this whom you have taken and bind, strong that he is? Not even the well-built ship can carry him. Surely this is either Zeus or Apollo who has the silver bow, or Poseidon, for he looks not like mortal men but like the gods who dwell on Olympus. Come, then, let us set him free upon the dark shore at once: do not lay hands on him, lest he grow angry and stir up dangerous winds and heavy squalls.” [1] His mates do not heed the warning and Dionysus unleashes his wrath as strange things are seen about them. Sweet, fragrant wine runs streaming throughout the pirates’ black ship. Vines dripping with clusters of grapes spread across the tops of the sails enveloping the ship while dark ivy blooming with flowers and berries entwines the ship’s mast.

At this moment the ship’s crew finally recognizes their folly and deeply regrets not having heeded the prophetic words of their helmsman. Alas, it is entirely too late, for the god, himself, transforms into a dreadful lion and summons illusions of ferocious wild beasts: the leopard or panther, sacred to the god, and yes, quite literally lions, tigers, and bears. [3]

As the beasts lunge, the terrified pirates promptly jump overboard into the sea’s cold embrace, but the god enjoys the last laugh as the pirates transform into dolphins upon striking the waves. Only the helmsman, who enjoyed the change of heart, is spared to tell this tale of the wrath of Dionysus.

The interior of the Dionysus Cup reveals the larger-than-life, resplendent deity reclining within a ship, its unfurled sails catching full wind and mast festooned with vines and clusters of grapes raining wine on deck. Flitting about the scene, our poor brigands-turned-dolphins leap and dive within an imagined wine-dark Mediterranean backdrop.

As with the “Circe cup,” which we looked at in episode 87 of the podcast about “Circe and Witchcraft in Ancient Greece,” we enjoy another playful visual treat on the Dionysus Cup. Here the exterior of the cup humorously bears the painted image of large glaring eyes. Playful cups of this sort are not entirely uncommon in the corpus of Greek ceramics and go by the modern connoisseur’s ingeniously descriptive designation of … wait for it … “eye cups.” While the drinker of wine holds the cup aloft to his lips, quaffing the intoxicating concoction, he seems to don a bestial mask like the Gorgon Medusa, whose gaze would petrify. Or perhaps more poignantly, if the stem becomes a snout and the handles the ears, the drinker then becomes a pig like Odysseus’s men transformed by Circe’s potent potion of wine. Go back and check out episode 87 again at ancientartpodcast.org/87 for a refresher on Circe and the pig reference.

We’ve repeatedly encountered the theme in ancient Greece of alcoholic intoxication as a magical means of metamorphosis into ignoble beasts. Episode 3’s donkey-headed rhyton cup, the aforementioned eye cups, and the MFA’s “Circe cup” offer readily accessible allusions to inebriation begetting transformation, while the tale of Dionysus and the pirates decorating the interior of the Dionysus Cup features a more restrained reference to intoxication’s metamorphic magic. The first of Dionysus’s phantasms is a wave of sweet wine that washes through the ship and drenches the pirates before they jump into the sea. Personally, I like to think more than a fair share of the wave of wine found its way down their throats. Because, after all, when you’re ticket is up and you’re going to go down fighting the god of wine, it might as well be in an alcohol induced stupor. But then, I don’t know. Is it fair to regard dolphins as the asses and swine of the sea?

Thanks for tuning in to the Ancient Art Podcast. Check out ancientartpodcast.org/90 for references, footnotes, and image credits for this episode. If you have anything to add to the conversation, you can add a comments there or on YouTube. You can get in touch with me directly at info@ancientartpodcast.org or on the web at ancientartpodcast.org/feedback. If you enjoy the podcast, please consider sharing some fiscal love. Whether it’s the cost of a cup of coffee or more, your donations help keep this ship afloat on our odyssey sailing the wine-dark seas. Just click the donate button at ancientartpodcast.org. And if you can’t donate a drachma, you can help the podcast by adding an iTunes review. Maybe it’ll even get you on the air, like Janscil, who wrote: “So pleased to have discovered this series of podcasts. The host combines discussions with images and references to collections in musuems both in the States and abroad. His style is direct and approachable: altogether a delight to experience. I’ve been haunting the “additional resources” on the website as well.”

Thanks for listening. See you next time.

[2] Ovid, Metamorphoses 3.572ff. Translated by A. D. Melville (Oxford World’s Classics): “Brought to the beach a prize (or so he thought), discovered on this lonely spot, a boy, as pretty as a girl. He seemed to reel, half-dazed with wine and sleep, and almost failed to follow along.”

The Precession of the Equinoxes in the Inverted Alps
By Azureflux
Licensed under Creative Commons
freemusicarchive.org

Pirates
By Jack and the Pulpits
Licensed under Creative Commons
freemusicarchive.org

Homeric Hymn 7:
“First of all sweet, fragrant wine ran streaming throughout all the black ship and a heavenly smell arose, so that all the seamen were seized with amazement when they saw it. And all at once a vine spread out both ways along the top of the sail with many clusters hanging down from it, and a dark ivy-plant twined about the mast, blossoming with flowers, and with rich berries growing on it; and all the thole-pins were covered with garlands. When the pirates saw all this, then at last they bade the helmsman to put the ship to land. But the god changed into a dreadful lion there on the ship, in the bows, and roared loudly: amidships also he showed his wonders and created a shaggy bear which stood up ravening, while on the forepeak was the lion glaring fiercely with scowling brows. And so the sailors fled into the stern and crowded bemused about the right-minded helmsman, until suddenly the lion sprang upon the master and seized him; and when the sailors saw it they leapt out overboard one and all into the bright sea, escaping from a miserable fate, and were changed into dolphins. But on the helmsman Dionysos had mercy and held him back and made him altogether happy, saying to him: ‘Take courage, good […]; you have found favour with my heart. I am loud-crying (eribromos) Dionysos whom Kadmos’ daughter Semele bare of union with Zeus.'”
— Homeric Hymn 7 to Dionysus (trans. Evelyn-White) c. 7th to 4th B.C.

6 Replies to “Dionysus and the Pirates, the Dionysus Cup by Exekias (90)”