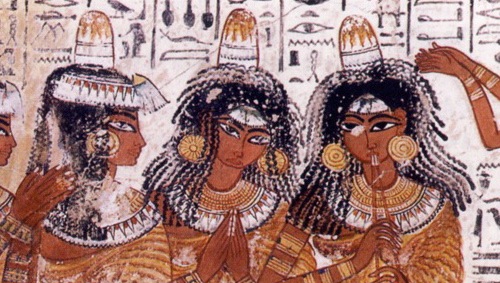 So many of Ancient Egypt’s monumental architectural achievements were built to celebrate the life and legacy of their great kings and to ensure an afterlife befitting of their grandeur on Earth. In the private tombs of everyday Egyptians, we also see a dominant attention to ensuring a great afterlife through inscribed prayers and funerary trappings. And just what was that Egyptian concept of the afterlife? Why, it was an idealized version of life along the banks of the Nile. What better testament to the Ancient Egyptians’ love of life than for their version of Heaven to be life along the Nile without work, death, or taxes?

When we think of funerary artwork of the modern era, we might picture weeping angels, skeletal figures, golden rays of Heaven, or other divine or mournful imagery. In Ancient Egypt you definitely see depictions of funerary practice in scenes from the Book of the Dead, but those scenes are generally tucked away in the burial chamber, hidden from all but the gods and the decedent, him or herself. On the walls of the tomb and more readily visible to the visiting family member or supplicant, however, you’d find yourself surrounded by scenes not of death, but of life.

Some of the most beautiful and well known scenes of daily life from Ancient Egypt come from the New Kingdom tomb of Nebamun. This incredible wall painting in the British Museum depicts Nebamun and his family enjoying an outing into the marshes hunting for fish and fowl. We already saw this scene in our exploration of the lotus flower in episode 35, number 10 in the top ten list. Also notable is the party scene showing the family surrounded by their extended family and a bountiful feast while enjoying a performance of music and dance. Now, while these images show charming moments of life along the Nile, it’s important to note that they’re also commonly interpreted as being relevant to a funerary context: the subjugation of chaos to ensure a smooth transition into the afterlife and the funerary feast to provide nourishment for Nebamun’s soul. But the point is that Nebamun chose to suggest these important funerary concepts through the celebration of everyday life. A glorified version of life on Earth as his vision of Heaven.

There’s a cool 3D interactive animation of the tomb of Nebamun on the British Museum’s website. The link is kinda long, so I shortened it for you. Check out tinyurl.com/nebamun and if that expires, you can head on over to ancientartpodcast.org and find it on the Resources page under the “Links to Other Resources.”

The Egyptians also chose to equip their tombs with useful items from everyday life, like mirrors, combs, ointment jars, and makeup palettes, because, well, you want to look good in the afterlife. And this suggests that you would need to use the equipment to maintain your looks—a very practical approach to the afterlife.

And you have to to be able to function in the hereafter. Because the Ancient Egyptian Heaven was, to the Egyptians, as much a real place as the hard ground (or, I should say, flowing river) beneath their feet, transportation was important too. Model boats, like this one at the Art Institute of Chicago, were popular grave goods. Being interred with this model of the boat would grant you a real one on the other side. Ancient Egypt is one place where, yes, you can take it with you!

But for a king’s tomb, a mere model won’t suffice. Buried in a pit adjacent to the pyramid of King Khufu we find this full-sized, actual boat. This so-called “solar boat” is thought to have been symbolically used by king to ascend to the heavens, much like the sun god Ra sails across the sky in his solar boat. But what we have here is after a long reconstruction effort. It was completely disassembled when placed in the original pit. So, I guess conceptually it would have to have been reassembled in the afterlife.

Of course, why would you let the hard work of carpentry, or plowing your fields, or harvesting your crops spoil a good thing? Who wants to work in the afterlife? To see to it that you would not need to lift a finger once you’ve reached paradise, you might choose to be buried with little figurines meant to do all the work for you. These figurines called “shabtis” or sometimes “shawabtis” were made out of wood, stone, or a glazed baked quartz material called Egyptian faience. Shabtis were often inscribed with prayers invoking the figurines to step up, if the deceased ever had to do any sort of physical labor in the afterlife. An inscription on the shabti of Nebseni at the Art Institute reads:

“O shabti whom Nebseni has instructed, obstacles have been set up for him (yonder). If Nebseni is counted off for any work (that is) to be done in the god’s domain, as a man to his duties, to cultivate the fields, to irrigate the shores, to transport sand of the east [and] of the west, ‘Here am I’ [you] will say.”

You could get buried with up to 365 of these little fellows, one for each day of the year. Act now and we’ll even throw in this handsome little carrying case with separate compartments for convenient organization and storage.

So, to say that the Ancient Egyptians were obsessed with death is really not accurate. They were no less human than you or I (apologies to all the non-human viewers). No less fearful or mournful of death, and no less obsessed with life.

This episode was brought to you by the Ankh, the letter “quail chick,” and the number “kh3.”

Thanks for tuning in to the Ancient Art Podcast. Don’t forget to check out ancientartpodcast.org for past episodes, photo galleries and credits, transcripts for every episode, and links to other online resources. Questions or comments, you can email me at info@ancientartpodcast.org, submit your feedback on the website, or leave a comment on YouTube, iTunes, or under each episode on the website. Peace out and see you next time on the Ancient Art Podcast.

See the Photo Gallery for credits.