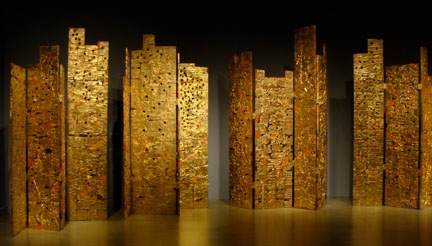 The recent exhibition Beyond Golden Clouds: Japanese Screens from the Art Institute of Chicago and the Saint Louis Art Museum is now in it’s final days at the Art Institute, from June 26-September 27, 2009. it brings together the strengths of two phenomenal collections of art. The 32 works of art in the exhibition trace the explorations and innovations in the art form from as early as the 16th century to contemporary screens of the past decade, stretching the definition of the Japanese folding screen format.

The screens in the exhibition showcase the wide variety of forms prevalent throughout the tradition, from tall screens of approximately 280 centimeters to diminutive screens like this 96 centimeter masterpiece from 1605-1610 by Hasegawa Togaku from the Saint Louis Art Museum. One finds screens even shorter than this called pillow screens used to shelter one’s head from the draft when sleeping on rather low traditional Japanese beds, and even smaller still simply to place around your fire when trying to heat a pot of tea. That gets at the heart of the function of the folding screen; that is as a wind breaker. The Japanese word for the folding screen byobu is spelled from two characters meaning “to stop” or “block” and “wind.”

Japanese screens are traditionally produced in pairs with a right and left. Generally any sort of narrative or other sense of continuity present in the subjects flow from right to left. Folding screens are also traditionally regarded as the highest form of art within Japanese culture and the greatest masterpieces of artists’ careers, like this well known pair from the Art Institute by Tosa Mitsuoki, Flowering Cherry and Autumn Maples with Poem Slips completed sometime between 1654 and 1681. It’s hard to walk through the Art Institute gift shop without tripping over some likeness of these famous screens.

Here we see two beautiful trees from opposite seasons, spring and autumn — this explosion of brilliant beauty for only a brief period of time before a powerful gust of wind or rain shower come and scatter the flowers or leaves on the ground. The blossoming of cherry trees is feverishly celebrated in Japan very much still today as the momentary beauty that heralds the new lunar year. Imagery of the natural world is a favored subject of Japanese screens, exploring the four seasons often as a metaphor for the impermanent, fleeting nature of the physical world around us and our own lives. Very Zen Buddhist concepts that make their way into the art and popular culture.

Strips of paper tied to branches of the trees are decorated with famous poems from highly regarded anthologies of the 10th through 12th centuries. The poems celebrate seasonal themes, connecting nicely with the subject matter of the screens, and give praise to the emperor, leading us to believe that this pair of screens were likely produced by imperial commission. Notice how the slips of paper are wafting in the wind, some even turned around or partly obscured. These poems were so famous to the well educated aristocrat that only a few words from any given piece were necessary for identification. And I really like the clever little visual pun that Tosa Mitsuoki made here where lovely cherry blossoms obscures part of a poem. The word that the cherry blossoms cover up is in fact “cherry blossoms.” It reads: “Since my heart is not content,/To return home after viewing/The cherry blossoms,/Around the site of their blooming/I’ll borrow a place to stay” (1).

Jumping to the end of the exhibition, we come to the magnificent installation of Okura Jiro’s series Mountain Lake Screen Tachi. Produced over a period of about 6 months during the artist’s residence at the Mountain Lake, Virginia workshop in 1990, this contemporary work of art dramatically redefines the art form of the folding screen. The artist produced a set of 16 four-paneled screens. There’s a great little video in the exhibition documenting their creation. Five of the screens are exhibited in the show; three from Saint Louis and two from the Art Institute given as a gift by the artist, himself. The other 11 are in various museums and private collections.

Among the many non-traditional features to these screens are the use of metal hinges, which swing both ways, allowing for maximum flexibility in installation. Also abandoned is the traditional painting on paper framed within a wooden framework. Here the narrow panels are made of timber, specifically black walnut selected from the Jefferson National Forest in Virginia, chosen for its likeness to the Japanese gray-bark elm often used for sacred objects in Japan. On account of Okura’s deep spiritualism, a Shinto priest presided over a ceremony blessing the trees prior to their logging. After cutting the logs into several planks of varying length, the artist and his students went to work drilling holes and chopping out bits with chisels. It’s important to emphasize that this was a group process. The pluralizing suffix tachi in the title of the work refers to this collective collaboration. The artist likened the collaborative effort of repetitive drilling and striking to the meditative recitation of holy Buddhist sutras.

Portions of the screens were finally covered with red cinnabar and black paint before a layer of gold leaf was applied almost haphazardly. Okura took no pains to smooth out the gold leaf or apply it with any great precision. In fact, the gold leaf is largely only partly adhering to the surface with portions dangling and wafting with the slightest draft. If you look closely, you might even see a flake here and there dusting the ground beneath the screens. A conservation nightmare for sure, but conservation wasn’t his motivation. Inspired by ancient Japanese statuary at Buddhist temples, whose painted surfaces have long since disintegrated exposing the natural beauty of the wooden grain beneath, Okura Jiro recognizes and embraces the impermanence of his artwork, knowing that it too will decay and return to a natural state, much as the flowering cherry and Autumn maple celebrate the ephemeral nature to the physical world. (2)

Lastly, it’s interesting to realize how the folding screen, once regarded in Japanese culture as the highest form of artistic achievement in painting, has now been adopted by other artists or dare I even say “craftsmen,” like carpenters, sculptors, and ceramicists. Another example of the changing face of the Japanese screen.

I hope you enjoyed this brief escape from the ancient world. If so, please consider leaving your comments online at ancientartpodcast.org, YouTube, or iTunes. You can email me at info@ancientartpodcast.org and follow me on Twitter at lucaslivingston. Thanks for listening and see you next time on the Ancient Art Podcast.

1. Pheasant and Pine. Kano Koi. 1626. Saint Louis Art Museum, funds given by Mary and Oliver Langenberg, Mr. and Mrs. Richard A. Liddy, and Susan and David Mesker (105:2002). “Beyond Golden Clouds: Japanese Screens from the Art Institute of Chicago and the Saint Louis Art Museum,” cat. 5, photo by Lucas Livingston.