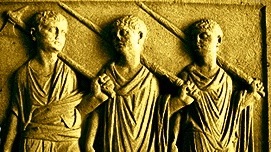 Welcome back to the Ancient Art Podcast, your guidebook to the art and culture of the Ancient Mediterranean World and beyond. I’m your host on our forays into the ancient past, Lucas Livingston.

Last time on the podcast in episode 46 about the Augustan Ara Pacis, we saw a procession of Rome’s elite gracing the north and south façades. Between the figures of Augusts Caesar and Agrippa we see a bunch of flamens with pointy-tipped hats. No, that’s not a tasteless joke. The flamens were a very ancient body of Roman priests. You can tell that they’re members of the flamens because of their bold fashion statement — what’s called the apex, a leather skull-cap with a chin strap and a point projecting from the top. [1] And at the base of the point where it meets the cap is a darling little puff of wool. I hear it’s all the rage with the kids these days. It’s the new black. And if you look closely, you’ll also see that their garments have a neck strap, like a cloak. The flamens customarily also wore this heavy woolen cloak over their toga fastened with the neck strap. The attention to detail on the Ara Pacis is pretty amazing.

Behind the flamens and right in front of the shrouded Agrippa, we see a guy carrying a big stick. I’m sure while you were closely scrutinizing episode 46 of the podcast, you undoubtedly asked yourself, “Hey, what’s that big stick that dude’s carrying?” If you look closely at the top, you’ll see that there’s actually an axe blade. No, he’s not the Imperial Wood Chopper. On account of what he’s holding, we know that this gentleman is a lictor. Lictors were like body guards assigned to Roman magistrates, positions of certain judicial and executive authority. We call that authority imperium, and it includes people like the Emperor, dictators, praetors, and consuls. At times, though, lictors were even assigned to private citizens, and a special kind of lictor, the lictor curiatus, was assigned to religious persons, like Rome’s high priest, the Pontifex Maximus, and Vestal Virgins. [2] That might explain the lictor here, either following the flamens or preceding Agrippa with the shroud of the Pontifex Maximus. Although, supposedly, the lictor curiatus customarily didn’t carry that big stick.

That stick is called a fasces. It means “a bundle” and it consists of a bundle of birch wood rods tied together with leather straps. An axe is also frequently enclosed within the rods with its blade sticking out to one side. The fasces were carried by lictors as a symbol of power, strength, and authority to dispense capital punishment. The lictors themselves didn’t have that authority, but the magistrates they guarded symbolically did. Although in reality, Roman magistrates didn’t go around beheading Roman citizenry. Supposedly, the Law of the Twelve Tables, a long-lost document that spelled out Rome’s early laws and customs, prohibited Roman magistrates from executing Roman citizenry without proper judgment. [3]

When inside the symbolic sacred limits of ancient Rome, called the Pomerium, magistrates had only limited authority. To represent this, the axe blade was removed from the fasces while a magistrate and his lictors were within the Pomerium. Here’s a cute little figurine of a lictor from the Art Institute of Chicago. This bronze statuette is about 5 inches tall. His fasces is a little bent, but he’s in pretty good shape, considering it dates to the first century of the common era. You can clearly see how the fasces is rendered with grooves like a fluted column to suggest a bundle of separate rods. And they’re bound together in two spots along the length. The tapering towards the tip might suggest that the rods themselves tapered or that the inner rods were gradually longer than the outer rods, but I’m just guessing. Note also the nifty handle of slimmer diameter, so the lictor could easily grasp the fasces with one hand.

According to some interpretations, the number of rods in the fasces was traditionally twelve, a particularly auspicious number to the Romans. [4] We already just learned about the Twelve Tables. Also, there being twelve months in a year, twelve was significant to the god Janus, god of beginnings, doorways, and the new year. Livy states that Romulus was first to appoint lictors and their number was twelve, either because of a good omen of twelve birds promising the kingdom to Romulus or because that number was imported from the Etruscans. [5] Lictors and the fasces were likely an Etruscan invention. [6] Subsequently, kings, dictators, emperors, and consuls of Rome traditionally had a retinue of twelve lictors. It’s hard to say if actual Roman fasces truly had twelve rods, since as far as I know no Roman fasces survive today, so all we have to go by are miniature models, like the Art Institute’s figurine. But if you look really carefully at the number of grooves in the fasces, you might just be able to convince yourself that you’re seeing twelve distinct rods.

In contrast to most magistrates, a dictator retained all authority within the Pomerium, so his lictors’ fasces could continue to bear the axe blade. Going back to the Ara Pacis, we might start to wonder why the lictor has a fasces with an axe blade. If he’s one of the flamen’s or Agrippa’s lictors and they’re inside the Pomerium, then the fasces theoretically shouldn’t have an axe blade. But maybe he’s one of Augustus Caesar’s lictors, and the emperor was as good (or bad) as any dictator. Or maybe that’s because the ritual procession represented on the Ara Pacis was held at the site of the Ara Pacis in the Campus Martius, which was outside the Pomerium, so the fasces could lawfully bear the axe. Or maybe you really don’t care about any of this.

The symbol of a bundle of rods suggests strength through unity. On its own, a single stick is easy to break, but a union of many sticks standing fast together in the face of adversity become a formidable talk to me. This symbol and metaphor was readily adopted by later left-leaning cooperatives and workers’ unions. The modern Italian word fascio is related to the Latin fascio and that’s where we get the word “fascism.” The Italian Fascist movement of the 20th century spearheaded by the infamous Benito Mussolini was arguably the most successful at co-opting the term and symbol for their nationalistic movement.

While the fasces became the symbol of the Italian Fascist Party, they weren’t the first or last modern military or political body to employ the emblem. The fasces continue to be used widely today not as an actual bundle of wood with an axe blade sticking out, but as a decorative emblem on shields, crests, and flags throughout the world.

In the United States alone, the fasces appear on the seal of the National Guard Bureau, on the so-called “Mercury” dime minted from 1916-1945, on either side of the flag behind the rostrum in the House of Representatives, on the seal of the U.S. Senate, on the arms of the chair of the Lincoln Memorial, above the door to Chicago’s City Hall, and that’s just barely scratching the surface. Look up fasces on Wikipedia.org for a much more exhaustive list. And for a three-dimensional representation of the fasces fully in the round, check out the statue of the virtuous Roman dictator Cincinnatus in Cincinnati, Ohio, and the Mace of the House of Representatives. [7]

Well, my thanks to those of you still listening. That’s probably more than most people would ever care to know about the fasces. I encourage you to visit ancientartpodcast.org where you’ll find the photo gallery and credits for this and other episodes, the transcript with lots of helpful footnotes, links to other great online resources, and an lengthy bibliography. If you have any questions or comments, email me at info@ancientartpodcast.org or fill out the Feedback form on the website at http://feedback.ancientartpodcast.org. Connect with the podcast at http://facebook.com/ancientartpodcast and get in touch on Twitter @lucaslivingston. If you want to help support the podcast, you can leave your comments and ratings on YouTube and iTunes. Thanks for tuning in and we’ll see you next time on the Ancient Art Podcast.