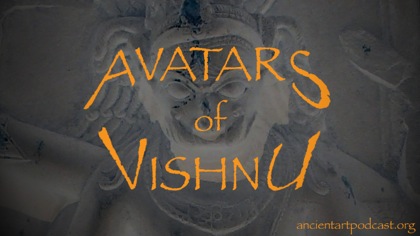 Hey folks. Welcome back to the Ancient Art Podcast, your nifty guidebook to the art and culture of the ancient world. I’m you friendly traveling companion, Lucas Livingston.

With all the current hype about Mr. Cameron’s latest titanic piece of cinematography, the CGI-wonder Avatar, I thought it might be enjoyable for us to explore the true meaning, history, and imagery of the traditional usage of the word “avatar.” The term has met widespread usage in recent years, especially in the realm of computer gaming and virtual reality, from World of Warcraft and The Sims to Second Life. But unless you were especially literate, eastwardly spiritual, or big into Dungeon & Dragons, you might not have had the opportunity to familiarize yourself with the true meaning of “avatar.” It comes from the Sanskrit avatara, basically meaning a being, who has crossed over or come down. In essence, an avatar is a physical manifestation or incarnation of a god on Earth, which we commonly encounter in Hindu narratives.

The Hindu deity most frequently associated with avatars is the god Vishnu. Vishnu is one of the most prominent and widely revered deities in the Hindu faith.

Vishnu is one of the Trimurti, the Hindu triad, or the “three forms,” where the concepts of cosmic creation, preservation, and destruction are personified by the three deities Brahma, Vishnu, and Shiva, respectively. As the divine preserver of the cosmos, it’s Vishnu’s job to manifest and restore dharma, or social justice and cosmic world order, whenever it’s threatened by some malevolence. The number of avatars of Vishnu ranges among texts, but the most commonly recognized number of his incarnations is 10, known as the Dasavatara, meaning the “ten avatars.” [1]

One of the most recognized avatars of Vishnu is the hero Krishna, a popular deity in his own right and the star of the Mahabharata, a great Hindu epic narrative. In Bhagavad Gita, the “Song of the Lord,” part of the Mahabharata, Krishna relates to his friend Arjuna:

“For whenever Right declines and Wrong prevails, then O Bharata, I come to birth.
To save the righteous, to destroy the wicked, and to re-establish Right I am born from age to age.” [2]

That quote is from chapter 4 of the Bhagavad Gita as told by the great 20th century spiritual leader and civil rights activist Mahatma Gandhi. We encounter another avatar of Vishnu in the supposed last words of Gandhi, featured as an epitaph on his tombstone, “He Ram.” Meaning “Oh God,” “He Ram” refers to Rama, the avatar, king of Ayodhya, and the hero of the Hindu epic Ramayana. The Ramayana tells the tale of Rama as he battles the ten-headed Rakshasa demon Ravana, who has kidnapped Rama’s wife Sita. Ravana had become too powerful, ruling over the heavens, the earth, and the netherworld, invulnerable to all living and celestial beings, except man and animals. He was an arrogant and destructive ruler harboring evildoers. As the divine preserver of dharma, Vishnu promised to defeat Ravana on Earth manifesting as the human prince Rama, while his divine consort, Lakshmi, took birth as his future spouse Sita. Throughout his life as a man on Earth, his true identity and destiny were known by none, but himself and a few great sages.

Chronologically, Rama and Krishna are the 7th and 8th avatars of Vishnu, according to the list of ten avatars. [3] The 9th and most recent avatar is sometimes considered to be Buddha, also known as Gautama or Shakyamuni. That’s especially interesting, because, we usually encounter Buddha in, um, Buddhism, not Hinduism, but this is wonderfully exemplary of Hinduism’s traditional acceptance and incorporation of world religions. As opposed to “There’s only one god and I’m right and you’re wrong.” You could look at this as an expression of the core belief held by some that all of the many divinities of the world are extensions of a singular supreme divine force. Buddha as an avatar of Vishnu, who primarily promoted non-violence, or ahimsa, is still a popular belief among a number of modern Vaishnava Hindu organizations, including the West’s particularly recognizable, although modestly sized Hare Krishna movement. [4] Alternatively, some scholars have put forth the interpretation that Buddha as an avatar was an attempt to absorb this offshoot Buddhist heresy back into Hinduism. [5] There are always two sides to the coin.

Beyond Rama, Krishna, and Buddha, two avatars of Vishnu that we frequently encounter in art are Vishnu’s incarnation as a boar or boar-headed man, Varaha, and the man-lion Narasimha. Varaha is skillfully represented on this 11th century sandstone sculpture from Rajasthan, India at the Art Institute of Chicago. When the Earth began to sink into the ocean under the burden of all the world’s evil and corruption, Vishnu manifested as the avatar Varaha and lifted the Earth personified here as the goddess Bhudevi. This work captures the moment when Varaha and Bhudevi fall in love. Varaha gazes fondly at Bhudevi as she gently lays her hand upon his snout. Down below, his left knee bent, he rests his foot upon a lotus. Beneath the lotus are two nagas, serpent deities, who symbolize the oceans from which Varaha has lifted the Earth. And Varaha and Bhudevi live happily ever after, so the story goes. In other representations of the story, we encounter the evil demon Hiranyaksha, who kidnapped the Earth and pulled her beneath the cosmic oceans. Varaha descended into the oceans to battle Hiranyaksha for 1000 years. Once victorious, we see Varaha raising the Earth from the water.

Hiranyaksha had an older brother named Hiranyakashipu and he’s downright angry. Hiranyakashipu wanted to avenge his brother’s murder at the hands of Vishnu, so he offers many years of penance to Brahma and gains special powers in return: that he may not die indoors or outdoors, during the day or at night, nor on the ground or in the sky. He can’t be killed by human, divinity, or animal. Oh, and he also become supreme ruler of everything. So, he had a son named Prahlada, who, much to his father’s disappointment, was a devout follower of Vishnu. One day as the sun was setting and nighttime was encroaching, Prahlada, as any angst-ridden child would do, challenged the notion that his father was the supreme lord of the universe, saying that Vishnu’s the all-pervasive, omnipresent lord of everything. Hiranyakashipu points at a column in the courtyard and smugly says, “So, your omnipresent god is even in that column, there?” Prahlada says he is, at which point Hiranyakashipu smashes the column in a fit of rage. Vishnu bursts forth from the fractured column as the avatar Narasimha, not human nor beast nor divinity, but the part-man, part-beast incarnation. He grabs Hiranyakashipu at that moment of twilight, neither day nor night, lifts him onto his lap, neither ground nor air, and tears into him right there in the courtyard, a liminal space neither indoors nor outside. Crafty fellow, that Vishnu.

In this amazing 11th century black basalt sculpture from the Art Institute, we see a fierce six-armed Narasimha digging into Hiranyakashipu, stretched across his lap. The column is shown on the lower left next to his right leg. He’s also standing on another demon, who’s trying to stab him with a knife. Below the lotus flower base, we see the prostrate donor couple who commissioned the work of art, which was originally set up in a temple.

The last avatar of Vishnu to get an honorable mention here is the dwarf Vamana. As we might come to expect, a demon king had taken over the cosmos. This time his name was Bali, but he wasn’t so bad. He was the grandson of the pious Prahlada, the Vaishnava son of Hiranyakashipu. But still, that was just too much authority for one person to have. So, the diminutive Vamana requested that he could have as much land as his his little legs could cover in just three steps. Bali consented and Vamana suddenly grew to an immense size becoming the mighty Trivikrama, which means “Three Steps.” With his first step, he covered the world, with his second step he covered the heavens and netherworld, and with nowhere else to step, Bali offered his own head for the third and final step. The god was so impressed by this pious gesture that he renamed him Mahabali, meaning “The Great Bali,” and granted him immortality up in heavens.

So, one thing you could say that James Cameron got right in the movie Avatar is that the avatar in the film, Jake Sully, came to the Na’vi people in a time of great trouble. It wasn’t the character’s original intention to be their savior, but perhaps it was his destiny. Likewise, Cameron probably wasn’t even thinking of the original sacred context of the avatar when he scripted the film, but it makes for an interesting connection. And hopefully you’ve found our journey here not only enjoyable and educational, but maybe you can even impress your friends with some enlightening conversational insights as Avatar goes up for its 9 Oscar nominations at the 82nd Academy Awards on March 7th.

Be sure to check out the website at ancientartpodcast.org for the image gallery with image credits, the transcript with references, and lots of other fun stuff. I welcome your feedback and suggestions at info@ancientartpodcast.org or with the online feedback form. I’d also love to get your comments on YouTube, in iTunes, or on the website, itself. You can follow me on Twitter at lucaslivingston and on Facebook at facebook.ancientartpodcast.org. Thanks for listening and see you next time on the Ancient Art Podcast.

[1] The Dasavatara of the Garuda Purana is a series instructions that Vishnu gave to his animal companion Garuda, whom we met back in episode 17 of the Ancient Art Podcast. For multiple lists of the avatars of Vishnu according to different scriptural traditions, see http://en.wikipedia.org/wiki/Avatar.

[4] “Gautama Buddha in Hinduism,” Wikipedia.
See also:
• “Krsna Will Accept You Anyway You Like.” Lecture given on March 31, 1974 by founder of ISKCON – A. C. Bhaktivedanta Swami Prabhupada.
• “Sri Dasavatara-stotra and Upaaya” (from Gita-govinda) by Jayadeva Gosvami.