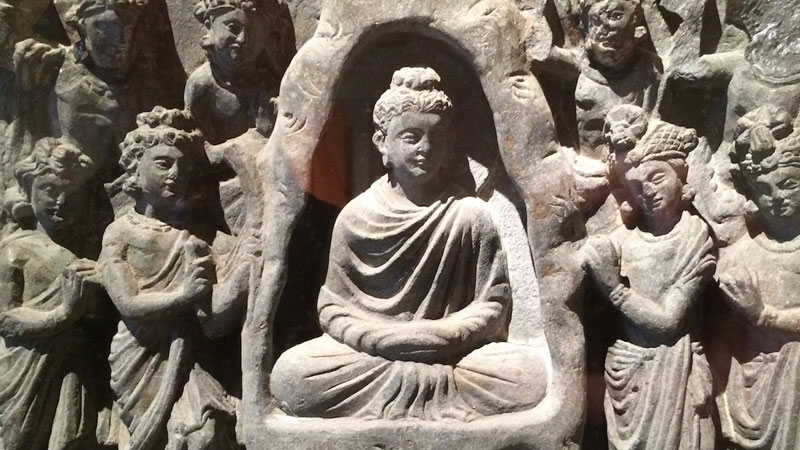 [AFG_gallery id=’4′]
For years, walking through the cavernous corridors of the Art Institute of Chicago, I had long passed by this crowded carving. The figures are certainly well formed. The artist has paid careful attention to detail with the flow of drapery and modeling of faces, but overall the composition is a little bit busy. The figures are cramped together. The use of scale to express perspective is a little bit awkward. But one day I spent a few minutes looking more closely at it and, you know, now I definitely have a crush.

Here we see two stories from the life of Buddha. The top scene depicts Buddha sitting in a cave with his legs crossed in the lotus position and his hands folded in his lap in a posture of meditation.

Do you see the two lions seated beneath Buddha? You might recall the Gandharan stupa reliquary from our last discussion (episodes 65 & 66) with its tall, lion-topped capitals, much like Ashoka the Great’s famous Lion Capital of Sarnath, one of the earliest work of Buddhist art. Lions were adopted as Buddhist symbols crying out the message of Buddha in four directions.

Who are all those other people surrounding Buddha with their hands together in supplication? Well, if we look at the label in the museum or on the website, we learn that this shows Buddha Shakyamuni meditating in the Indrashala cave. This scene likely depicts a tale from before Buddha’s birth in what you might consider Heaven. This is the realm of the Devatas (like angels or minor gods). Here the Devatas approach the eternal soul of the yet-to-be-born historical Buddha Shakyamuni and inform him that it’s time to be reborn on earth as a human, Siddhartha Gautama, who will ultimately become an enlightened Buddha — Buddha Shakyamuni. In some versions of the tale the Hindu gods Indra and Brahma even make an appearance among the surrounding figures. You might see this as a way to couch Buddhism in a sympathetic light for Hindus.

This tale is not very popular today. You might find it in Southeast Asia — in Thailand and Cambodia. But this is not a work of Southeast Asian art. Keen viewers of the podcast will recognize this as a work of Gandharan origin — nearly 2,000 years old — from present-day Afghanistan or Pakistan, where this narrative was also once popular. It’s not unheard of in Gandharan Buddhist art to find images showing Indra and Brahma. I imagine this must have suited the Gandharans well on the frontier of their Buddhist kingdom adjacent to the Hindu realm of India.

Then what do we have down below in this busy scene? Here we see Buddha surrounded by more people. There are a few figures to the far right behind him with simple robes and closely shorn hair — those must be his followers — and he’s being welcomed by some well-dressed folks in front of him. I particularly like those people in the balcony at the upper left. And then there’s one fellow prostrating himself at Buddha’s feet. This is a well known scene of one of the many Buddhas of the past. He is known as Dipankara, the “Lamp Bearer,” and is said to have lived 100,000 years ago. Remember, Buddha is not a name, but an honorific title given to someone, who has attained enlightenment. There have been many Buddhas in the past and there will be many Buddhas in the future. The prostrate figure is an ascetic hermit by the name of Sumedha. He was once a rich Brahmin, but he cast off all that materiality presumably to find inner peace through the path of Dipankara Buddha. When Dipankara approached, Sumedha kneeled down and laid his long matted tresses of black hair over a mud puddle so that Dipankara may cross without soiling his feet. With this kind gesture of piety, Dipankara revealed a magnificent prophesy to Sumedha that he, Sumedha, in the ages of the future will come to be a Buddha called Shakyamuni.

These two tales of different incarnations of Buddhas go hand in hand. The scene at the bottom prophesies the forthcoming of Buddha Shakyamuni, the historical Buddha, through the words of a previous Buddha no less. And the scene at the top shows that moment in Heaven when the eternal soul of the forthcoming Shakyamuni is called upon to be born and begin that magnificent prophesied life on earth.

What truly strikes me about this image, though, aside from the beautiful juxtaposition of blended legends, is the presence of one individual standing behind Dipankara. Among the slender figures with long robes of flowing drapery and closely shorn or beautifully coiffed hair, there’s this one muscular, wild haired, bearded brute wearing a simple loin cloth and holding some sort of cudgel.

Who is this curious guy and what’s his business? Well, if the possible inclusion of the Hindu gods Indra and Brahma in the Buddhist scene above wasn’t mind-blowing enough for you, brace yourself. This is none other than that legendary hero from Ancient Greece, Hercules. What on earth is Hercules doing in a Buddhist image? We’ll tackle that question next time in an episode I’m thinking of calling “Hercules and Buddha Walk into a Bar.”

One Reply to “67: ​Buddha’s Past Lives – Dipankara and Shakyamuni”