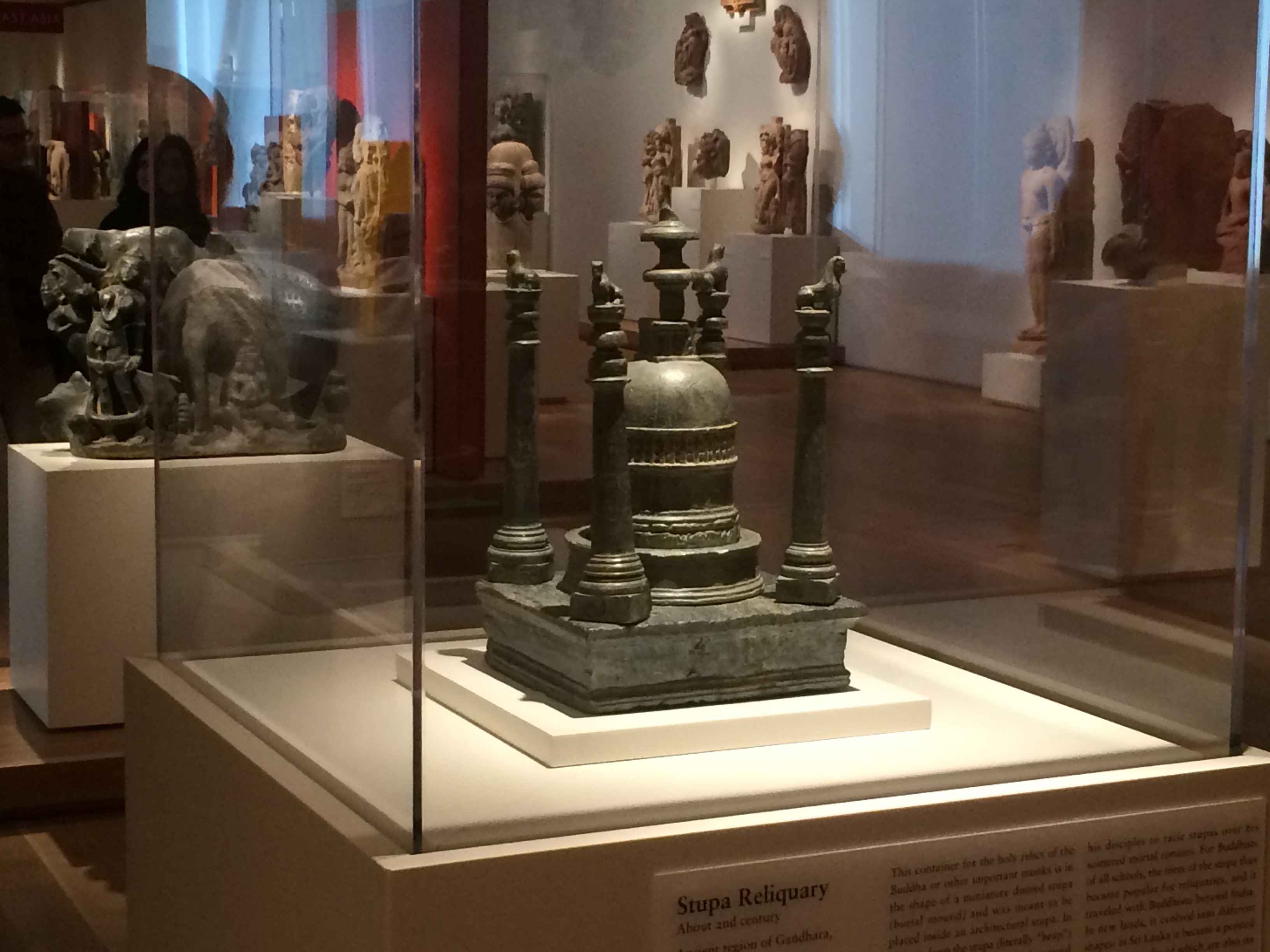 [AFG_gallery id=’1′]
Hello and welcome back to the Ancient Art Podcast. I’m your host, Lucas Livingston.

Thousands of visitors to the Art Institute of Chicago pass by this modest object every day, yet hardly give it a second thought. At first glance, this may not look like the most exciting object in the museum; certainly not against celebrated treasures like Rembrandt, Van Gogh, and Picasso. But its subdued appearance belies its cultural and aesthetic significance at the crossroads of East and West, where great empires collide.

It stands at about a foot tall (30.5 centimeters) and is made of phyllite, a type of soft stone similar to soapstone. We call this a Gandharan Stupa Reliquary. What eldritch incantation did I just utter? Well, let’s break down that name starting from the end. Simply put, a reliquary is a container for a relic. So, what’s a relic? You may have visited a place of worship once that housed the relics of some sacred person. Museums can be full of relics. Bits of cloth, slips of paper, stones, and human remains. There’s a relic of the tooth of St. John the Baptist in the Art Institute housed within a beautiful gothic reliquary.

So, what’s a stupa? “Stupa” is a Sanskrit word meaning “heap.” A stupa is a mound or dome-shaped memorial or funerary monument prevalent in India, South Asia, and the Himalayas. Stupas contain the remains of Buddhist holy figures or other relics. It is said that when the historical Buddha, Siddhartha Gautama, died some time in the 6th through 4th centuries BC, his body was cremated and the ashes were entombed under eight stupas.

Later in the 3rd century BC, the Indian emperor Ashoka the Great of the Mauryan Dynasty excavated Buddha’s ashes and is said to have subdivided the ashes among 84,000 stupas spread across his expanding Buddhist empire. Stupas are not just tombs, but holy shrines, to which Buddhist devotees make pilgrimages for veneration. One of the most famous stupas is the Great Stupa at Sanchi, which was commissioned by Ashoka. Its appearance changed substantially during its first few centuries under successive rulers—expanding, elaborating, reconstructing, and destroying over time.

Stupas come in all sizes, from monumental architectural feats to modest objects like the Art Institute’s example. A reliquary like this may have once contained a spiritual text, a sutra, perhaps some mortal remains, or perhaps even another miniature model stupa. The bell-shaped dome is solid stone, but the cylindrical pedestal it’s standing on has a small cavity carved out for the relic. Not too long ago, I was involved with a 3D-scanning project at the Art Institute and we actually replicated the Gandharan stupa reliquary using a 3D printer. While the original lives behind glass, the 3D-printed replica helps you get a better sense of its many different parts and how it once functioned.

Ashoka’s Great Stupa at Sanchi and the Art Institute’s Gandharan stupa differ vastly in scale and shape. Upon closer inspection, though, they actually share the same fundamental architecture. The basic form consists of a dome on a cylindrical base. The dome is like an egg, a symbol of creative potential and the cycle of death and rebirth. Atop the dome is a symbolic altar suggestive of the sacrifice of one’s self and the world in order to achieve nirvana. It’s crowned by a parasol, which commonly suggested a person of high status. And the pole of the parasol imaginarily goes on forever as an axis-mundi, the axis of the world uniting heaven and earth.

So, finally, in our title of “Gandharan Stupa Reliquary,” what does Gandharan mean? Astute subscribers to the Ancient Art Podcast will recall our discussion of a Gandharan bodhisattva back in episode 7. Gandhara was a kingdom that thrived in the 1st through 5th centuries of the Common Era. The culture goes back centuries earlier as the eastern frontier of the Persian Empire’s Achaemenid Dynasty. The Gandharan region today corresponds to parts of Pakistan and Afghanistan, and we even see the name “Gandhara” reflected in the modern city name “Kandahar.” With the collapse of the Persian Empire at the hands of the Macedonian general Alexander the Great, the Gandharan region pivoted for a few centuries between Hellenistic Greek rule and the Indian Mauryan Empire. It flourished as a cultural crossroads of Greece, India, and Persia, which we see reflected in the arts, including our little stupa.

So, now we know what a Gandaharan stupa reliquary is and then some. Stick around with the Ancient Art Podcast if you want to learn more about the culture that built it, the significance of those four pillars surrounding the dome, and most importantly what this has to do with Star Wars.

Don’t forget to visit ancientartpodcast.org for detailed credits and more. I hope to see you next time on the Ancient Art Podcast.