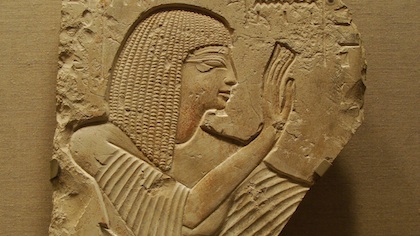 Hello friends and welcome back to the Ancient Art Podcast. Continuing the countdown of the Top 10 Ancient Egyptian Myths and Misconceptions, we come to myth number 4: “Egyptian Art Doesn’t Change over Time.” Like some of the other items in the top 10 list, it’s easy to believe the misconception that the art of the Egyptians didn’t change over thousands of years, which is why it’s a popular misconception. I mean, just look at these two works. On the left we have the famous predynastic-period Narmer Palette in the Egyptian Museum in Cairo (ok, well, yeah, this is actually a reproduction in the Royal Ontario Museum, but it’s a really great photo). And on the right is a New Kingdom scene from Karnak Temple of a pharaoh (probably Seti I) smiting the enemies of Egypt. Overall, the two scenes look relatively similar. Narmer and Seti both reach out with one hand to grasp their enemies by the hair, while their other hand raises a mace high above their heads ready to strike. Their bodies are similarly shown in the canonic Egyptian paratactic pose, where both shoulders are visible as though seen frontally, whereas their heads are turned in profile, and yet the single visible eye is rendered frontally. And so on and so forth. Go back to episode 9, Walk Like an Egyptian, for a more detailed exploration of the human form in Egyptian art. And then when we realize that these two representations are nearly 2000 years apart. Well, if that’s not a smack-down boo-yah for Egyptian art not changing over time. Or to say it a bit smarter, there’s evident durability of stylistic conventions, thematic content, subject matter, and iconography over thousands of years of Egyptian civilization.

Now, we’re not going to bust this misconception wide open, but if we look a little more closely, we can definitely pinpoint some distinct stylistic and thematic changes over time. Look at the Narmer Palette from about 3,100 BC. The stylistic execution is called low or bas relief, where the background of the image is carved away leaving the subjects in the foreground slightly elevated. Bas relief was especially popular in the the Old Kingdom for the decoration of tomb walls with varying degrees of depth and complexity. Check out this awesome carving of donkeys in the Art Institute of Chicago. Notice the subtle modeling in the snouts and the ears, giving the figures an almost sculptural form. But this piece is pretty exceptional for the time period. It’s also important to remember that relief carvings were originally painted, so in most cases the different surface levels of foreground and background were largely overshadowed by the difference in color.

Taking a piece from the Middle Kingdom also in the Art Institute, our well known friend from earlier episodes, Amenemhet along with his wife Hemet and their son Amenemhet Jr., the one or two millimeter difference in depth between the figures and the background is pretty much negligible compared to the strong contrast produced through color alone. In the dimly-lit interiors of Old Kingdom tombs and temples, unpainted relief alone wouldn’t produce a satisfactory contrast to distinguish the images. Color was critical. Also typical to the Old Kingdom is the embossing or outlining of the lips and eyes as seen here on both the man and the bull.

What’s also interesting is that you could almost say that it’s during the formative period of Egyptian Civilization where we see a larger degree of experimentation and variation in the art … before the establishment of the canon of proportions and representation. Notice here how the man’s right shoulder is bent forward in an attempt to render the figure a bit more naturalistically in profile. Likewise on this scene of butchering. There’s some serious movement and action in this wall fragment.

If we turn our attention to relief carving of the New Kingdom, we can see some distinct changes. Perhaps the most significant development is the style of relief carving, itself. While bas relief is certainly still found in later periods, the sunk relief technique seems to be more prevalent. Here in the Art Institute’s image of Neferhotep, we see how the sunk relief technique involves removing the surface of the foreground figure, carving a deep trench outlining Neferhotep, and then masterfully modeling the figure within its outline. Sunk relief generally goes deeper than bas relief, which gives the artist more room for modeling or three-dimensionality. The pleats in Neferhotep’s robe aren’t simply grooves gouged into the stone, but are curved and peaked much like fluting on a Greek column. His body and face aren’t a flat plane, but a rounded surface. His cheek is slightly raised compared to his nose. Similarly, his shoulders are at two different depths almost conveying a sense of perspective. And if we turn back to Karnak Temple, we might begin to discover an overall change in function for relief carving.

While the Egyptians certainly still continue to employ both sunk and bas relief to decorate their interiors, there’s an explosive monumentality in the representational art of the New Kingdom going from interior to exterior. Under the blazing light of the Egyptian sun, the subtle depth and smooth edges of bas relief just won’t do it. The sharp canyon in sunk relief, however, produces a dark shadow outlining the figures. So even when the color is completely bleached away, we can still clearly see the prominent image of Pharaoh ensuring cosmic world order and dominating over chaos.

There are some other big changes that happen in Egyptian art during shorter timespans. We won’t go into great depth on any of these here, but in the Middle Kingdom during the reigns of Senusret III (1878-1839 BC) and Amenemhat III (1860-1814 BC) there’s a strong penchant for hyper-expressive, downright depressing portraiture in both royal and private sculpture. To be fair, portraiture isn’t exactly the right word, because we can’t say for certain that the Egyptians we trying to represent a person’s true likeness. This Middle Kingdom style might have some sort of connection with contemporary philosophical texts exploring the burden of kingship and a new sense of humility after the decline of the age of the pyramid builders. Let’s also not forget the radical transformations during the reign of Akhenaten, which we discussed at length in past episodes. But these relatively short-lived examples of change in Egyptian art aren’t the kinds of broadly sweeping artistic evolutions that we’re talking about here.

If you look beyond the artist’s method and concentrate on the subject matter, we find another interesting development particularly in funerary art. As we’ve explored in detail on the top 10 list in episode 39, “Tombs Depict Scenes from Daily Life,” generally speaking, private funerary decoration of the Old and Middle Kingdoms culminates with the celebration of the deceased before a table full of edible offerings. Then in the New Kingdom we see a dramatic shift in attention. On the Art Institute’s mummy of Paankhenamun, for example, primary emphasis is on the decedent’s transition from the earthly realm to the land of the dead, a literal handoff from the son, the falcon-headed god of kingship Horus, to the father Osiris, lord of the underworld. In essence, we are celebrating the elevation of the deceased to the realm of the gods, something that was previously reserved just for the king of Egypt. Along with those Middle Kingdom philosophical texts on the burden of kingship in the shadow of the age of the pyramid builders, we also see a dilution of exclusively royal divine rights. Now, anyone who can afford it artistically can be elevated to godhood upon death. This monumental, spiritual, social, and economic shift in Ancient Egyptian civilization is beautifully reflected through a dramatic revolution in the arts.

So, while the Ancient Egyptians may not have developed abstract expressionism, it’s unfair to think that their art was entirely static, rigid, and unchanging over 3000 years of civilization, and we didn’t even begin to discuss the dramatic changes of the Ptolemaic dynasty.