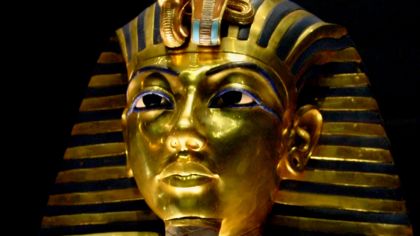 Welcome back to the Ancient Art Podcast, folks. Episode 42. Number 3 in our countdown of the Top 10 Ancient Egyptian Myths and Misconceptions. Kinking things off there with a nod to the Hitchhiker’s Guide to the Galaxy. We might not have the answers to “life, the universe, and everything,” but you have to wonder what it is about the number 42. There were 42 provinces in Ancient Egypt, or “nomes” as the Greeks called them. Not the garden variety. No “g” here, but, yes, still the funny hats. There were also 42 gods in the Egyptian Book of the Dead, the “Assessors of the Dead,” who listened to your confessions and decided whether or not you were worthy of passage to paradise. Spooky, huh? Where else do we find the number 42? Is there some sort of numerological, mystical aspect to 42? Let me know. Twitter @lucaslivingston, facebook.com/ancientartpodcast, or send an email to info@ancientartpodcast.org.

But all of that has nothing to do with our episode here. Coming in at number 3 in the countdown of the Top 10 Ancient Egyptian Myths and Misconceptions, “‘The Boy King’ Tutankhamun.” Um, what myth?

Hah! This one’s a curve ball. Yes, Tutankhamun was a boy king. He came to the throne likely at the age of 9 around 1333 and died around 1324 at 18 or 19. All things considered, Tut was a relatively minor king and should be completely overshadowed by the historic juggernauts of the New Kingdom like Hatshepsut, Akhenaten, and Ramses the Great. So, why’s he so popular today? From the 1922 discovery of his golden riches to today, King Tut continues to fascinate us, for both the audacity of his opulent riches (again, considering he was a minor king) to the mystery of his life and death. The discovery of the intact tomb of King Tut in November 1922 led to an explosion of Egyptomania across the globe. Further stoking the fires of hysteria in the popular media was the sudden death of Lord Carnarvon, the 5th Earl of Carnarvon, a few short months later in April 1923. Lord Carnarvon was the financier of Howard Carter’s excavation in the Valley of the Kings, which led to the discovery of Tut’s tomb. Carnarvon died in Cairo from an infected mosquito bite, but that was enough to set ablaze the hype of the “Mummy’s Curse.”

All things considered, despite being a minor king, Tutankhamun does deserve some credit for reigning during a particularly pivotal moment in Egypt’s history. This was the dusk of Amarna, when we saw a transition from the religious heresy and almost manneristic style of the Amarna Period during the reign of Akhenaten back to orthodoxy. As we explored back in episode 23 of the Ancient Art Podcast, King Tut’s name changed early in his reign from Tutankhaten to Tutankhamun, just as the name of his queen changed from Akhesenpaaten to Ankhesenamun, signifying an effort to erase that whole Aten episode under Akhenaten. Likewise, representations of King Tut gradually morph from the Amarna style with its elongated slender limbs, fingers, and toes, protruding chin, long sharp nose, flat forehead, narrow torso, and pudgy paunch to the orthodox style of realistic if not idealized masculine physique. And as we learned in episode 23, Tut was only about 10 years old when these changes started to happen. It’s not too likely that he made any decisions on his own other than which toy to play with. Tut was more likely just a puppet ruler under the thumbs of his two successors, the official Ay and General Horemheb. They saw the writing on the wall and wanted to win favor with the bitter and previously disenfranchised priesthood of Amun.

For all the we have learned and discovered about King Tut, it’s what we don’t know that continues to fascinates us the most. Who were his parents and just how did he die? Debates on both questions continue to rage without concrete proof. Were Akhenaten and Nefertiti his parents? Why is he never shown with them in their many family portraits? Was his mother more likely Kiya, a secondary wife of Akhenaten, or someone else entirely? Was Akhenaten even his father or was it the unlikely Amunhotep III? Did Tutankhamun, indeed, die from a combination of malaria and infection after falling off his chariot while hunting ostriches or was it murder most foul? Was the royal official Ay so desperate to seize the throne that he had Tut dispatched?

We may never have all the pieces to the puzzle, but perhaps it’s this reason that we continue to be so captivated by the “Boy King” Tutankhamun.