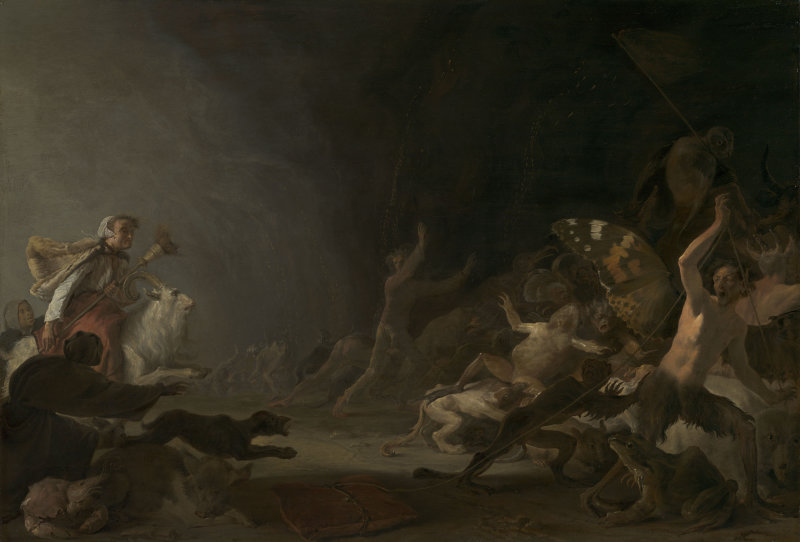 Greetings gashlycrumbs! Two years after its original release, I am now publishing the full & complete episode with highlighted content previously only available at ancientartpodcast.org/curious. Enjoy this spooktacular Halloween episode of the Ancient Art Podcast. Meet the wicked witches, devilish denizens, and things that go bump in the night in the Art Institute of Chicago’s painting “A Witches’ Sabbath” by Dutch artist Cornelis Saftleven. We explore the peculiar fascination Dutch and Flemish artists had with the proverbial “fire and brimstone,” including the famous pioneer of the genre Hieronymus Bosch. A detailed examination of “A Witches’ Sabbath” reveals various influences and motivations. We discuss the cultural context of Christian puritanism, the twisted history and legacy of the Witches’ Sabbath a.k.a. Walpurgisnacht, and its relationship with legend of Faust.

Greeting ghouls and goblins. Sit back for another spooktacular spectacle in this festive Halloween edition of the Ancient Art Podcast. I’m your ghost of a host, Lucas Livingston.

While floating through the corridors of the Art Institute of Chicago amidst Old Master paintings and illustrations, you might find yourself confronting a somewhat shocking scene of creepy crawlies and devilish denizens. This is A Witches’ Sabbath by the Dutch artist Cornelis Saftleven painted around 1650. Somewhat overshadowed by his brother Herman Saftleven II, Cornelis is nonetheless celebrated today for his paintings, etchings, and drawings. [1] And I’ll give him props for being dean of Rotterdam’s Guild of (my buddy) Saint Luke in 1667. [2] Cornelis was extremely versatile as an artist, producing some 200 paintings and far more drawings including portraits, interiors, landscapes, rural country life, including the popular Dutch genre of cattle paintings, biblical and mythological themes, and most notably images of hellfire and witchcraft. The proverbial “fire and brimstone” was celebrated in Netherlandish art (particularly Flemish art)—dare I say—maybe a little more than it should have been. Don’t get me wrong, I love a good pagan moot as much as the Wiccan next door, but this was more like a cultural obsession. The moralizing Hell and torture genre was kickstarted 150 years earlier by the acclaimed artist Hieronymus Bosch and was further popularized by Flemish artist Jan Bruegel and his father, Pieter Bruegel the Elder, who soared into public consciousness after his 1562 commission for the album cover to Black Sabbath’s Greatest Hits. (Lol!) [3]

In all scholarly seriousness, though, Easter Egg! What’s different between Bruegel’s original painting and the Black Sabbath album cover? First one to post the answer at facebook.com/ancientartpodcast wins … first place!

Dominating the scene in A Witches’ Sabbath, a creepy crone brandishes a broomstick riding atop a goat. A shadowy, robed figure gestures strongly with a bony hand marshaling our view deeper into the canvas. A strange dog-like Hell hound dashes forward as though to attack the denizens on the right. Most prominent among them is what at first seems somewhat like an ancient Greek satyr, half man, half goat. The ears and beard fit the bill, but those shaggy legs end in sharp bird feet, not cloven goat hooves. And his beautifully detailed butterfly wings seem like something out of the Seelie Court of Shakespeare’s A Midsummer Night’s Dream. The wicked horns of some devilish being behind our colorful friend the “butterflurkey” draw our gaze further skyward to the shrouded denizens of the hinterground. An alien standard-bearer wafts an unknown banner aloft, while a melange of cruel mongrels grasp and tear at one another, churning like the ocean waves. Trails of glowing embers sail from their bodies into the darkness as if to suggest the Devil’s brood being burned at the stake or some mystical essence being ripped from their souls.

Despite the overall fantasy of this scene, detailed observations from the natural world motivated Saftleven’s precise scientific rendering of many subjects, like the butterfly wings, amphibians, and crustacean. Saftleven was living and working in the Age of Reason, witnessing the birth of the scientific method and the invention of the microscope. Taxonomic and anatomical studies strongly motivate his work and the work of his Netherlandish contemporaries.

It’d be easy to miss the large flat object in the foreground shadows if our eyes weren’t being drawn to it by the long rope in the hands of our friend the “butterflurkey.” Is it a wrapped and bound tome of necromantic incantations? The witch’s spell book, perhaps? Why is he dragging it along the ground? Did he steal it from the witch, who’s charging to get it back? Or is it just a sofa cushion for when he runs out of steam? We might not be able to say definitively what’s happening in this scene. The title might give us some help. The witches’ sabbath has a long dark history throughout medieval Europe, when witches and necromancers were said to gather and cavort with Satan’s minions. On October 31, All Hallows’ Eve or Samhain, the veil between the living and the dead is said to be at its thinnest and the dead return to visit the living. [4] At the exact opposite end of the year on April 30, witches were said to fly on goats and broomsticks to Brocken mountain, the highest peak of Germany’s Harz Mountains, where they revel with the Devil in celebration of Walpurgisnacht. [5] One of the more famous accounts of Walpurgisnacht, translated as the Witches’ Sabbath, comes from Goethe’s Faust of 1808-1832.

“Now to the Brocken the witches ride; the stubble is gold and the corn is green; There is the carnival crew to be seen, And Squire Urianus will come to preside. So over the valleys our company floats, with witches a-farting on stinking old goats.” Goethe [6]

This passage conjures some colorful imagery, including that of witches mounted on old goats, much as our witch in Saftleven’s A Witches’ Sabbath. But what do we make of “over the valleys our company floats?” While there’s no floating or flight in our painting, an 1829 engraving after an illustration by Johann Heinrich Ramberg interprets Goethe’s words rather literally, showing witches in flight on brooksticks and on goats approaching the horned god on the mountaintop. This might also remind us of Francisco Goya’s two well-known Witches’ Sabbath paintings from 1789 and 1820-23, the latter also known as The Great He-Goat.

Writing at the same time as Goethe, the great German folklorist Jacob Grimm also associates a witches’ gathering with Walpurgisnacht.

“At the end of the Hilss, as you near the Duier (Duinger) wood, is a mountain very high and bare, … whereon it is given out that witches hold their dance on Walpurgis night, even as on Mt. Brocken in the Harz.” [7]

While Goethe’s Faust was composed over 150 years after Saftleven’s A Witches’ Sabbath, the legend of Faust far predates Goethe and was extremely popular in Saftleven’s time. The earliest mention of Faust is found in the early 1500’s, conceivably even based on an actual person. [8] The legend continues to grow and evolve throughout the 16th and early 17th century.

Early stories of Faust characterize him as a debase charlatan, sometimes even a foul necromancer in league with the Devil. The basic moral premise seems to be a condemnation of the pursuit of secular human knowledge at the expense of one’s immortal soul, the abandonment of religious Protestantism in pursuit of worldly spiritual corruption, also known at the height of the Protestant Reformation as Catholicism. In the second half of the 1500’s and early 1600’s, the legend was widely published throughout Europe, including the earliest Dutch and Flemish versions in 1592. [8]

As so many Dutch and Flemish paintings at this time are allegorical, Cornelis Saftleven’s A Witches’ Sabbath is rife for interpretation. [9] Is it a straightforward depiction of the horrors of pagan witchcraft painted at a time when witches were still being hanged and burned at the stake? Is the Walpurgisnacht narrative from the legend of Faust being exploited as an allegory preaching against the seductive pitfalls of sin and worldliness? Is it a Protestant jab at Catholic orthodoxy and corruption? Or maybe a Catholic jab at the Protestant Reformation? Or maybe even a Protestant jab at the Catholic Counter-Reformation? Could the tome dragged across the earth be meant to suggest to the learned viewer the published legend of Faust, itself, rather than a witch’s spell book, as we suggested earlier? Although I still think it looks like a sofa cushion.

Well, we’re left with many questions and only a handful of answers. Thankfully, things that go bump in the night continue to have a timeless appeal. So do be sure to seek out A Witches’ Sabbath next time you’re in the Art Institute of Chicago and enjoy the creepy crawlies all to yourself.

Thanks for tuning in to the Ancient Art Podcast. If you enjoyed our brief discussion of A Witches’ Sabbath, I hope you’ll head on over to ancientartpodcast.org/curious where you can get the full episode with a much deeper treatment of the subject. If you dig the podcast, be sure to “like” us on Facebook at facebook.com/ancientartpodcast and give us a nice 5-star rating on iTunes. You can follow me on Twitter @lucaslivingston and can subscribe to the podcast on YouTube, iTunes, and Vimeo, where you’ll hopefully give us a good rating and leave you comments. You can also email your questions and comments to me at info@ancientartpodcast.org or use the online form at http://feedback.ancientartpodcast.org. Thanks for tuning in and see you next time on the Ancient Art Podcast.

[3] Also known as The Triumph of Death.