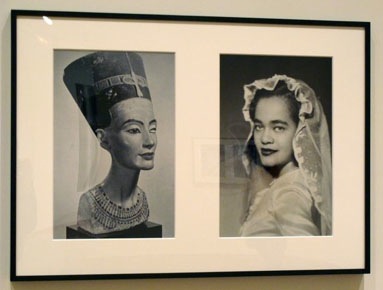 On October 31, 1980 at Just Above Midtown Gallery in New York City, artist Lorraine O’Grady, dressed in a long red robe, debuted her new work of performance art. On a dark stage with a slideshow backdrop and dramatic recorded narration, O’Grady enacted hypnotic, ritualized motions, like the priestess of an ancient mystery cult, incanting magicks over vessels of sacred sand and offerings blessings of protection to the projected images of the Ancient Egyptian Queen Nefertiti and her late sister Devonia Evangeline O’Grady Allen. In the piece entitled Nefertiti/Devonia Evangeline, Lorraine O’Grady confronted her relationship with her sister through the lens of Nefertiti and Nefertiti’s own apparent sister, Mutnedjmet — a relationship which O’Grady felt would have been equally troubled. O’Grady’s sister Devonia tragically died just a few short weeks after the two of them had finally begun speaking after many years of a strained relationship.

Inspired two years later after a trip to Egypt, O’Grady began researching Queen Nefertiti and her famed family of the Amarna Period. While in Egypt, O’Grady encountered a new found feeling of belonging — as the artist says in her own words, “surrounded for the first time by people who looked like me” (Art Journal 56:4, Winter 1997, p. 64). Of African, Caribbean, and Irish descent, O’Grady never felt a similar sense of kinship in her homes of Boston and Harlem. In a New York Times article from September 26, 2008, “she remembers her youthful efforts to balance what she has called her family’s ‘tropical middle-and-upper class British colonial values’ with the Yankee, Irish-American and African-American cultures around her.” Building on a resemblance that she long thought her sister had with Nefertiti, she was struck by what she saw as narrative and visual resemblances throughout both families. While pairing members of her own family with those of Nefertiti, O’Grady weaves together various narratives connecting personal stories with historical events (Alexander Gray Associates press release, 10 Sep 2008).

In 1994, from the performance piece Nefertiti/Devonia Evangeline originally composed of 65 photographic comparisons, O’Grady took about a fifth of the diptychs and framed them in an installation piece entitled Miscegenated Family Album, which has been exhibited in various galleries, including the Art Institute of Chicago in 2008. O’Grady’s work often focuses on black female identity and subjectivity, as well as cultural and ethnic hybridization. Miscegenation, in the title of the piece, is the procreation between members of different races, which was still illegal in much of the US as late as 1967, when it was finally overturned by the Supreme Court.

The ethnic identities of Nefertiti and Akhenaten have been debated in the spheres of Egyptology and African studies, with no immediate end in sight. Not quite as much as Cleopatra, but still. In Nefertiti/Devonia Evangeline and Miscegenated Family Album, O’Grady directly confronts the racism of a white-dominated, Western-European interpretation to the field of Egyptology. While the notion of a black African cultural and ethnic influence on Ancient Egypt is frequently discussed today, we should bear in mind that in 1980, when O’Grady first performed Nefertiti/Devonia Evangeline, this was still seven years before the publication of Martin Bernal’s highly acclaimed and criticized work Black Athena: The Afroasiatic Roots of Classical Civilization.

Now, I’m not saying that the sub-Saharan African influence on Egyptian civilization is definitively confirmed. It’s still a hotly debated issue with many shades of gray. Ancient Egypt was a huge nation surviving thousands of years. And during that time there was frequent contact with surrounding countries, including periods of foreign occupation. By the time of Nefertiti and Akhenaten in the mid to late 14th century BC, parts of Egypt were pretty ethnically diverse, which likely got even more ethnically diverse as the centuries led up to the Ptolemaic period of Cleopatra. I’m excited to see that the University of Manchester museum will be hosting a conference on “Egypt in its African Context” on October 3rd and 4th, 2009. You can read about the conference online. The URL’s kinda long: www.museum.manchester.ac.uk/collection/ancientegypt/conference. [As of at least 12/22/2010, this link is no longer active. Visit http://egyptmanchester.files.wordpress.com/2009/08/egypt-in-its-african-context-programme1.pdf for a PDF of the conference agenda. Visit http://egyptmanchester.wordpress.com/2010/08/07/sally-ann-ashton-talking-at-the-manchester-museum-at-the-conference-egypt-in-its-african-context-3-4-october-2009/ for videos.] So, check out the transcript at ancientartpodcast.org for the link or see my recent tweet on Twitter at “lucaslivingston.”

One point that we need to bear in mind when considering the ethnicity of Ancient Egyptians is the baggage we bring with us to the discussion. We all have a lot of baggage, but what I’m specifically talking about is the whole preoccupation with ethnicity. I don’t know about kids these days, but not too long ago when I was a wee lad, every American schoolboy or girl could tell your their heritage, breaking it down by the percentage. Blame it on the African diaspora, Western imperialism, or Ellis Island, but I would argue that this obsession with the argument over whether the Ancient Egyptians were black, white, Greek, Berber, or other is something of a modern development. The Egyptians were an ethnically diverse lot and they would have said to us “So what!?” What mattered to the Egyptians was that you were Egyptian. You don’t hear of Ancient Egyptian race riots.

The beauty of O’Grady’s Miscegenated Family Album is that it looks more than skin-deep. O’Grady draws a few parallels between her sister Devonia and Nefertiti. They both marry, have daughters, and perform ceremonials functions — one as a priestess, the other as a bride. Devonia passed away at the age of 37 before the two sisters could fully reconcile their differences. Nefertiti suddenly vanished from the written record after the 12th year of Akhenaten’s reign, around the year 1341. Back in the 1980’s when O’Grady was researching for her performance piece Nefertiti/Devonia Evangeline, the prevalent theories for Nefertiti’s disappearance involved her death or fall from grace, perhaps due to Akhenaten elevating another consort to Great Royal Wife. Akhenaten did, in fact, elevate someone else to be the Great Royal Wife at that time — his eldest daughter Meretaten.

Nefertiti may have died, or some argue that she was elevated to co-regent, like a king-in-training. Another theory is that Akhenaten’s fourth daughter, Neferneferuaten Jr., became co-regent. She’s junior, because another one of Nefertiti’s names was also Neferneferuaten, and since the co-regent was named Neferneferuaten … well, hence the confusion as to exactly who was co-regent. After the death of Akhenaten around 1336 BC, we then have king Smenkhkara, ruling just a short while before our boy King Tut came onto the scene.

Another parallel that O’Grady draws is between herself and Neferitit’s apparent younger sister Mutnedjmet. Just as the younger O’Grady was left behind after her sister’s sudden and tragic passing, Mutnedjmet would also have been abandoned after Nefertiti’s sudden disappearance, according to the theories at the time. Just to bring everything else up to current theory, contrary to popular speculation, there’s no evidence that Nefertiti’s sister is the same Mutnedjmet, who was queen to the later king Horemheb. Also the more widely accepted translation today of Nefertiti’s sister’s name is Mutbenret, which is spelled exactly the same in hieroglyphs. But those are both minor technicalities that have little to no impact on O’Grady’s overall work. The importance of Nefertiti/Devonia Evangeline and Miscegenated Family Album is that the immediate physical resemblance in the framing of O’Grady’s family members with figures of ancient history is indicative of deeper sentiment and associations. The past becomes an idealized and humanized film through which our own lives are filtered and compared.

Keep on moon walking, Michael, in the great beyond.

You’ll find a whole lotta great links about Lorraine O’Grady and her work at ancientartpodcast.org. Click on Additional Resources and scroll down to the post prominently titled “Lorraine O’Grady.” If you’re interested in seeing Miscegenated Family Album in person, Lorraine O’Grady has posted on her own blog that it should be installed in the Art Institute of Chicago’s new Modern Wing some time in the near future, and I have an unconfirmed corroborating report from unnamed sources. But if you want to find out for yourself, over at ancientartpodcast.org among the additional resources on O’Grady, you’ll find a link to the Art Institute’s online collection record for Miscegenated Family Album, which tells you whether or not the work is on display.

You can follow me on Twitter at lucaslivingston. If you have any questions you’d like me to discuss in future episodes, be sure to email me at info@ancientartpodcast.org. You can also give feedback on the website and fill out a fun little survey. You can comment on each episode on the website or on YouTube. And if you like the podcast, why not share the love with some iTunes comments? It helps get the podcast noticed. Thanks for listening and we’ll see you next time on the Ancient Art Podcast.