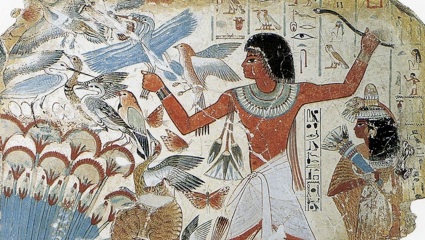 Hello travelers. Welcome back to the Ancient Art Podcast. Continuing the countdown of the Top Ten Ancient Egyptian Myths and Misconceptions, we come to myth number #6: Tombs Depict Scenes from Daily Life.

Wait … what!? Isn’t that we’ve been saying all along? Didn’t you, Mister Smarty Pants, just say so yourself in the last episode of the podcast? Yes, but, to be fair, that was The Egyptians Were Obsessed with Death and this is Tombs Depict Scenes from Daily Life.

Yes, technically one could very well argue that what frequently grace the walls of private Egyptian tombs (as opposed to royal) are scenes of life along the banks of the Nile, but let’s drill down into what they really mean.

Typical to the relief work of private tombs, we find scenes of Egyptians hunting fish and fowl and bearing the fruits of their labor for preparation and feasting. Likewise, cows are brought forth for butchering, sometimes with unsettlingly realistic documentation of the process. Baking bread, brewing beer, and vintnering also make an appearance. All manners of food preparation were most certainly a part of daily life in Ancient Egypt, but this is a peculiarly narrow slice of life. Where’s the rest of day-in day-out humdrum? Where’s school and sports? Where’s artistry, leisure, romance, and play? Where’s marriage, divorce, birth, graduation? Where’s history and biography? We should ask ourselves why the Egyptians chose to reflect such a narrow extent of their daily lives on the permanent walls of their tombs.

An argument can be made for some of the missing aspect that we just glossed over. From the 26th Dynasty Theban Tomb no. 36, in the remarkably faithful reproduction by the English pioneer of Egyptology John Gardner Wilkinson, we see, for example, Egyptians engaged in all manners of craft: cobbling, metalworking, sculpting, carpentry, and jewelry-making. Additionally, in the 12th Dynasty tomb of Djehutihotep, we find a scene showing the transport of a colossal statue. Is this the documentation of an historical event?

My point, though, is that the preparation of food is an almost requisite element to funerary decoration and this all leads up to the grand culmination within the tomb: the funerary feast. This goes back to the idea from last time of equipping the dead for the afterlife with objects from life on earth, like cosmetics and model boats. With the very practical approach to the Egyptian afterlife, the soul of the deceased requires not only furnishings, but nourishment to thrive in the hereafter.

When we look at the scene in context, we don’t have just an isolated meal, but an entire narrative of elaborate preparation, familial feasting and celebration, and the depiction of a very thriving decedent.

Look at the popular funerary prayer, the hotep-di-nisw:

“An offering that the king gives consisting of a 1000 loaves of bread, 1000 jugs of beer, oxen, fowl, alabaster, and cloth, an offering of provisions, and everything good and pure on which a god lives.” [1]

Just as the prayer graces the wall of the tomb, so too do we see an illustrated enactment of the prayer and all the theoretical effort that goes into putting the feast together to ensure the perseverance of the deceased in the afterlife.

Remember the magnificent paintings from the tomb of Nebamun? Surely this lovely scene of the noble family fishing and fowling among an idyllic Nile marsh setting represents one of Nebamun’s favorite weekend enterprises immortalized here in his fantasy vision of life after death. Or does it? Another common interpretation is the dominance of order over chaos, ma’at, the Egyptian concept of truth, law, justice, and cosmic world order, which we’ve explored in previous episodes.

Comparable expressions of smiting or spearing are seen in tombs elsewhere and in the Book of the Dead. Spiritual documents like the Book of the Dead and Imy Duat (“That, which is in the Underworld”) were frequently the subject matter decorating the walls of royal tombs, in contrast to what we’ve just been looking at from private tombs. Whether written or illustrated, these narratives provide a similar function of protection and insurance for a smooth transition into the hereafter, while also documenting the journey and its many trials.

So, when we look at private tomb paintings depicting idyllic settings and animated toil and labor, we can look through multiple lenses. In short, there are many ways to skin this cat, or pluck the ibis, as it were. So, while to me it makes the most sense that these scenes construct a narrative celebrating and preparing for the funerary feast, I encourage you to engage your own skepticism, observation skills, and critical thinking.

Thanks for tuning in to the Ancient Art Podcast. Check out ancientartpodcast.org for past episodes, photo galleries, detailed credits, transcripts, and links to other online resources. You can send your questions or comments to info@ancientartpodcast.org or submit your feedback from the nifty form on the website. I dig your comments on YouTube and iTunes, so keep them coming. And you can keep in touch at facebook.com/ancientartpodcast and follow me on Twitter @lucaslivingston. Thanks and see you next time on the Ancient Art Podcast.

[1] Translation from Wall Fragment from the Tomb of Amenemhet and His Wife Hemet at the Art Institute of Chicago.

See the Photo Gallery for credits.