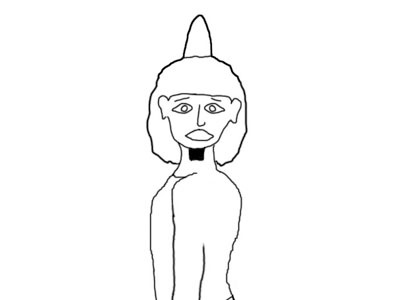 So, looking back at some of the Egyptian statuary that we’ve discussed in earlier episodes of the podcast, seeing the fine contours of the physique and careful attention to proportion and perspective, you might be wondering why it is that we have such cartoonish, flat, and unrealistic figures in Egyptian painting. There’s a deeply complex answer to this question involving Egyptian concepts of cosmic world order, philosophy, religion, magic, and even hieroglyphs. And now we’re going to try to answer this burning dilemma — the eternal mystery of the walk like an Egyptian.

We remember this gal, the goddess Ma’at seen here decorating the neck of the mummy case of Paankhenamun. In episode 2, we learned that the deceased is said to be “justified” or “true of voice” (ma’a kheru), basically a euphemism for dead. The word ma’a in ma’a kheru is the same root in the name of the goddess Ma’at. Ma’at is the deified form of the Egyptian concept of truth, but “truth” doesn’t really capture the complete meaning of this concept. Ma’at is truth, law, justice, right, and goodness, the natural and cosmic order of things. Balance and permanence. The sun will continue to rise each morning as it always has, because of ma’at. The Nile floods each year … well, used to flood each year, till they build the Aswan High Dam in 1970, but back before then, the Nile would flood each year leaving behind a thick deposit of rich, fertile, black, alluvial silt — a sort of mud — ensuring a bountiful crop year after year, because of ma’at. And it was the pharaoh’s job to ensure the persistence of ma’at, to ensure that the cosmic order didn’t get all whacked. And he did this by offering up prayers and sacrifices to the gods.

The Egyptian concept of ma’at, however, goes a lot deeper. It’s really an all-pervasive concept in Egyptian society, philosophy, religion, and the arts. As “truth,” ma’at is not just the way things are and were, but the way they need to be and need to have been to ensure the proper continuity of cosmic order. So, we sometimes come across a deliberate rewriting of history by the Ancient Egyptians to set things right when they encounter an apparent cosmic discord. With pharaohs whose reigns were thought to have been improper, we see a deliberate attempt not just to suppress the truth of the matter, but altogether to eliminate the incongruity from history, such as with the heretic king Akhenaten. He radically transformed Egyptian religion and, thereby, the political and economic status quo, by banning the cultic practices of the prominent Egyptian gods and elevating his own preferred cult of the solar disk, Aten, with himself as the exclusive intermediary. It didn’t take long after he died for the Egyptians to completely level the new capital city that he had constructed, Akhetaten, and systematically seek and destroy every attainable shred of evidence of his existence. Yeah … good luck ever finding his mummy. All in the favor of ma’at. Preservation of the eternal cosmic clockwork. And earlier in the same 18th dynasty, we’ve got the female pharaoh, Hatshepsut. Despite however wonderful and beloved a ruler she was, her successor and stepson, Thutmosis III, much to his chagrin, was compelled by mounting pressure late in his reign to restore ma’at by eliminating evidence of a woman ever having been Pharaoh.

Ancient Egyptians closely regarded the manufactured or sculpted historical and written record as factual truth, not only in the negative sense of erasure from history, but also in the positive sense of “if it is written, then it is true.” And I don’t mean just paid lip service or wishful thinking, as we might encounter with the representation by other cultures of historical events, but I mean in a very literal way. Ramses the Great may have had an ignoble stalemate at the battle of Kadesh, after being ambushed by the Hittite army lying in wait, but he managed to rewrite the history of the matter, exclaiming how he single-handedly charged forward into the Hittite throngs, driving his valiant steeds with enemies underfoot, smiting foes left and right with god-like fury … because Pharaoh just doesn’t lose battles. Ma’at would not have it that way.

In Egyptian funerary inscriptions, we see an even greater literal interpretation of the written word as truth. Remember back in Episode 2 we had a look at this wall fragment from the tomb of Amenemhet from the Egyptian Middle Kingdom. We saw how hieroglyphs are incorporated into the framework of the subject matter. The flowering reed hieroglyphic character used in place of sliced bread on the offering table, the loaves of bread, jugs of beer, and animal haunches are all represented the same way they’d appear in hieroglyphic inscriptions, like we see up above. So we see the direct incorporation of hieroglyphs in Egyptian painting. Just as with the historical examples we were just talking about: “if it is written, then it is true.” Not figuratively, but literally. The appearance of all these foodstuffs in essentially written form makes them “true” or permanent. So even if after a few generations, your great great grandchildren have long stopped making offerings of real bread and beer at your tomb, you’ve still got these representations made of stone. Being written and thereby literally truthful and really real, these representations of offerings in stone can magically function in place of real physical offerings, providing the same nourishment and ensuring the continued sustenance of the soul in the afterlife.

Egyptian hieroglyphs are a very potent magical language. The word “hieroglyph” literally means a “holy carving.” Hieroglyphs were largely reserved for use on sacred documents, funerary inscriptions, prayers, spells, and blessings. For every-day common written correspondence, legal documents, shopping lists, and the like, the Egyptians used something called hieratic — that is, that privileged one percent or so of the literate Egyptian populace. Hieratic is basically a highly cursive form of hieroglyphs, and so it’s essentially the same language. We see some hieratic here side-by-side with hieroglyphs on a fragment of the Book of the Dead from the Third Intermediate Period.

Egyptian hieroglyphs are a wonderfully ornamental language. Beyond the already imaginative use of mundane objects from everyday life in their language, the Egyptians also included themselves, that is different human figures and human body parts, in addition to a whole panoply of exotic and wild creatures, scores of different birds, beasts of burden, and dangerous, ferocious animals, like horned vipers, wasps, vultures, and carrion beetles. And remember in Egypt the written word is true, so much so that the bread and beer in funerary feasts figuratively emerge from the scene to offer their nourishment to the deceased. So what’s holding back the horned vipers and scarab beetles? We sometimes see the Egyptians expressing a sort of fear that the ferocious beasts depicted among their hieroglyphs might actually come to life and spring out of the inscriptions. The horned vipers might jump out and sink their venomous fangs into you. Ducks and geese could flutter forth and gobble up the bread left behind for the deceased. And scarab beetles may crawl about and burrow into the mummy itself. To prevent this from happening, we occasionally see something we call ritual mutilation of hieroglyphs. We might see the depiction of a little knife driven into the head of the horned viper, thereby killing it. Or we could see a duck, but it wouldn’t have any feet, so it’s not a whole, complete duck, a true duck. It doesn’t conform to ma’at, so it won’t run the risk of springing to life. It all comes back to ma’at. But it’s still legible and functions for the purpose of the inscription.

So what’s all this got to do with why the Egyptians represented the human form the way they did on a two-dimensional surface? Well, let’s take apart the human form, in a manner of speaking. The head is clearly in profile, yet we see two shoulders as though seen frontally. The chest is somewhat in between with the front breast seen frontally and the rear breast seen in profile. From the hips on down, the body is pretty much in profile. Interestingly, we always see two legs, whether they’re standing or sitting. There’s always at the very least a hint of a second leg peaking out from behind the front leg. We also always see two arms. If the figure were drawn the way we’re taught in grade school to draw someone from the side, we’d only see one shoulder and one arm, the other being hidden behind. And we’d only see one leg in front, the other one also hidden in back.

So why this contortion of the human form? Well, remember, to the Egyptians, “if it’s written, then it’s true” — true and eternal. Compare the painted human figure with the hieroglyph of a man. The Egyptians represented people in their art the same way they were written in their language. The human form in art is essentially a large version of the hieroglyphic human form, just as we saw with the grave goods piled on Amenemhet’s offering table. And remember the ritual mutilation of hieroglyphs that we were just talking about, where the horned viper might be ritually slain by a knife driven into its head or the truth or ma’at of a duck would be ritually nullified by not representing its feet? So, here on the mummy case of Paankhenamun, if Paankhenamun were represented quote-unquote realistically in profile with just one arm and one leg visible, forever here on after poor Paankhenamun would be hobbling around with just one leg and one arm in the afterlife. The Egyptians are essentially representing the salient characteristics that they considered to make up human physiology, that they considered critical for existence in the hereafter. It’s prescribed by ma’at that the human form be represent in this manner.

As a little curious aside, although the head is shown in profile, the eye is seen frontally, as though it’s staring out of the scene … but it’s not. Paankhenamun and Horus are clearly engaging with Osiris, not with us. If the subjects of a work of art are meant to interact with each other, the Egyptians would create a two-dimensional painting or relief carving. If the subject is meant to interact with us the viewer, the Egyptians would use a statue meant to be see fully frontally. Another curiosity in Egyptian painting and relief carving is seen in the feet. You never see little toes. Its as though you’re looking at the inside of both feet at the same time and you see only the big toe and the arch of the foot. Odd, huh? And that, children, is a story for another time.