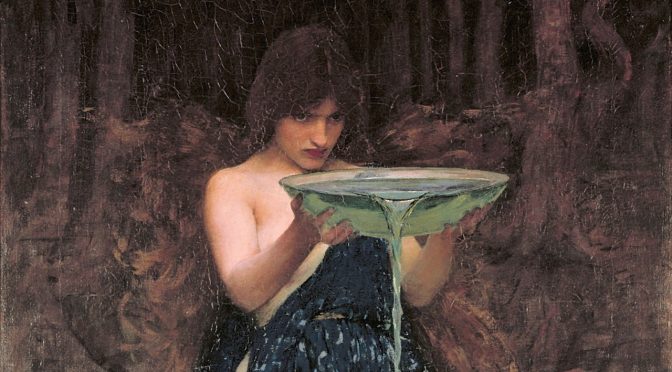 This is a short excerpt from my lecture “Things That Go Bump: A Visual Survey of Witches, Demons, and Ghosts.” Herein we explore the ancient Greek tradition of witchcraft and metamorphosis in two images — one ancient and one modern — of Circe, the definitive witch of Grecian lore and seductive sorceress of Odyssean fame. Waterhouse masterfully betrays her jealous cruelty in those cold, dark, uncaring eyes. Vying for the affection of a handsome lover, the hateful witch Circe poisons the placid pool where the her rival Scylla bathed. Circe’s potion of polymorphism transforms the beautiful nymph Scylla to the proverbial “hard place,” the loathsome multi-mawed many-tentacled monster, who’d dash the hopes (…and heads) of Odysseus’s men sailing “between Scylla and Charybdis.” And in the Grecian cup in the MFA, we see a magical elixir similarly perched in wicked Circe’s hands while Odysseus’s men are in the midst of metamorphosis from her arcane magicks.

Drinking cup (kylix) depicting scenes from the Odyssey
Greek, Archaic Period, about 560-550 BC
The Painter of the Boston Polyphemos
© Museum of Fine Arts, Boston (99.518)

One thought on “Circe and Witchcraft in Ancient Greece (87)”