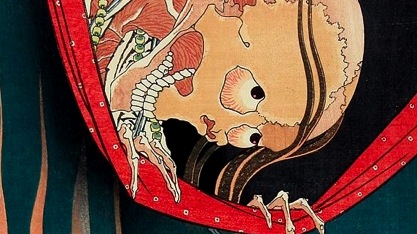 Hey people. Welcome back to the Ancient Art Podcast. I’m your host, Lucas Livingston. The Art Institute of Chicago recently opened its new galleries of Japanese art called the Weston Wing. You can now explore ancient treasures of Japanese art stretching back as far as the second millennium BC up through contemporary works of ceramics, bamboo basketry, woodblock prints, and painting.

As you pass through the decorative gate to the Weston Wing, the installation starts off with wonderful earthenware vessels and figurines from the Jomon period of about 2000 to 300 BC and human and animal haniwa figurines of the Kofun era. The Kofun era of the mid 3rd to mid 6th centuries of the common era gets its name from the large mounded circular or keyhole shaped tombs that were constructed in Japan during this period. Kofun dotting the Japanese landscape contained small clay vessels, structures, and figurines known as “haniwa.” The Art Institute has a few magnificent 5th and 6th century haniwa on display, including guardian warriors, dancing figures, wrestlers, and a hen. These wonderfully dynamic and expressive objects once encircled the burials of the deceased in concentric circles on the mounded kofun tombs. At the zenith of the mound directly above the deceased is where one would find a large earthenware model house. Surrounding the house you’d find satellite houses and other figural haniwa. At the base of the mound, simple clay cylinders outlined the entire kofun, forming something of a barrier.

There are different theories about the origin of haniwa. The more elaborate figurative objects likely evolved from the more prevalent and simpler cylindrical shapes. Looking at the hen you can see the vestigial cylindrical form from which it may have derived. The clay cylinders surrounding the earthen mound could have served as a sort of landscaping retaining wall, and the name “haniwa” (“hani” meaning “clay” and “wa” meaning “circle”) might suggest that function, but their placement doesn’t entirely support that theory. They could have functioned spiritually to form a demarcating barrier between the land of the living and the abode of the dead. Fierce haniwa warriors may likely have served as guardians to protect the deceased, and other figures as forms of entertainment and accommodations in the hereafter. [1] There’s a fascinating passage about the origin of haniwa in the Nihon Shoki, one of the earliest histories of Japan composed in the year 720. The passage states than an emperor demanded that a substitute be found for the mass sacrifice and burial of live attendants upon the death of a member of the imperial household, because killing off your entire retinue of servants is definitely not economically sustainable. So the clayworkers’ guild got together and fashioned clay figurines of people and horses to be used instead. Trouble is there’s no archaeological evidence to support mass sacrifice at Japanese tombs, but it’s argued that the Japanese could have been reacting to Chinese sacrificial practices of the much earlier Shang dynasty, because at the time when the Nihon Shoki was written, the Japanese were modeling their culture in part after China. [2]

My favorite haniwa on display at the Art Institute is this 5th or 6th century terra-cotta horse. At over 30 inches tall and long, it’s quite large compared to its haniwa neighbors. Looking at its different sections in isolation, you can see how its an assemblage of simple shapes from the ceramics of everyday life — plate-like disks, doughy spheres, unassuming rectangular sheets, and cylindrical tubes. The materials, techniques, and craftsmen of early haniwa were the same as those of everyday household clay wares. But through skilled hands, simple forms combine to produce an exquisitely expressive and magnificent horse befitting of the imperial stables. Judging by the care with which this and other haniwa horse images were crafted, the animals must have been extremely prized commodities in their day.

A somewhat eerie, haunting passage from that same 8th century historical text, Nihon Shoki, suggests the sense of prestige for equestrianism and artistic pride in the haniwa horse’s lifelike quality. A man named Hiakuson was riding home on a moonlit night past the tomb of Emperor Ojin, where he encountered a rider on a magnificent red steed, “which dashed along like the flight of a dragon.” Hiakuson strongly desired to posses the glorious red steed and whipped up his own mottled horse to ride up alongside. But the mystery horse and rider “shot ahead … [and] speedily vanished in the distance.” The rider eventually stopped, turned around, met up with Hiakuson, and agreed to exchange horses. Hiakuson was overjoyed and went home to stable and tend to his new prize steed. When he entered the stables the following morning, he was shocked to discover that the beautiful red horse had been transformed into clay. When he returned to the tomb from the night before, he found his own mottled horse obediently standing there among the clay haniwa horses of the emperor’s tomb. [3]

In the spirit of Halloween, with haunting apparitions and spectral figures about, while they’re not ancient, we’ll close this episode of the Ancient Art Podcast with the woodblock prints of Katsushika Hokusai (1760-1849) from the series “One Hundred Ghost Stories” published in 1831-32. Hokusai’s probably best know to viewers and listeners as the artist of the “Great Wave off Kanagawa.” [4] While he ended up designing only five spectral emanations in this series, of which the Art Institute has four, the “100” in the name comes from the favorite spooky past-time of lighting 100 candles in a circle. After each participant tells a frightening tale, they blow out a candle. Tale after creepy tale, the light slowly dwindles, and tensions rise, while the spirits of the dead are aroused from their slumber. [5]

With deft artistry and masterful skill of the woodblock print medium, Hokusai’s ghastly ghost prints illustrate tales of undead vengeance appearing in the kabuki theater performance “Four Nights of Gothic Tales from the Pacific Highway.” A skeletal specter (Kohada Koheiji) creeps with vengeful determination through a mosquito net to prey upon his murderous, adulterous wife and her lover. On an old, worn, paper lantern appears the ghoulish grimace of Oiwa, twisted in hideous disfigurement from the poison her suspicious and adulterous husband fed slowly her. The wispy ghost of the young servant girl Okiku floats from the deep dark well where her wicked master disposed of her corpse. The master had framed her for breaking a precious porcelain plate in a set of ten. He would forgive her if she would consent to his lecherous advances, but Okiku refused and had the life crushed from her at her master’s enraged hands. Every night the master would be awakened by the cries of Okiku’s ghost from the well counting 1, 2, 3, 4 … and after reaching 9, the wailing ghost cried loud, tortured sobs of sorrow, eventually driving the master insane. I like how Hokusai included the blue and white porcelain plates in the long spectral form of Okiku’s ghost, and a wisp of speech slips from her lips. The vengeful specter rising from a deep dark well has particular resonance in Japanese horror, as inspiration in multiple books and films, including the famous 1998 film Ringu and its 2002 American remake The Ring. Now, that’s one creepy movie.

Be sure to visit out http://www.ancientartpodcast.org for images from this and every episode of the podcast, including image credits. You’ll also find transcripts for every episode, an extensive bibliography, and links to other resources. Send you questions, comments, and suggestions to info@ancientartpodcast.org or get in touch with the feedback form on the website. If you dig the podcast, add a review on iTunes or leave a comment on YouTube. You can friend the podcast at http://www.facebook.com/ancientartpodcast and follow me on Twitter at http://twitter.com/lucaslivingston. Thanks for listening and have a safe and Happy Halloween!

Creepy sounds courtesy of The Freesound Project, created by the following artists, and remixed by Lucas Livingston:

One Reply to “34: Haniwa Horse and Hokusai’s Ghosts”