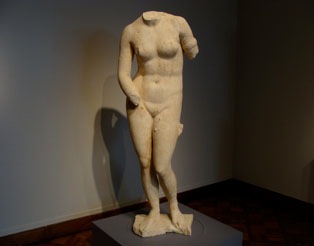 Welcome back to the Ancient Art Podcast. I’m your host, Lucas Livingston. Last time in episode 25, “Beheaded Beauties,” we explored the Art Institute of Chicago’s 2nd century Roman headless statue of a seated woman. We closed with a glimpse of the also-headless and roughly contemporary 2nd century statue of a standing nude woman.

There are a number of indicators that tell us that this is a copy of the famed Aphrodite of Knidos by the prolific Hellenistic sculptor Praxiteles from the 4th century BC, approximately five centuries earlier than the Art Institute’s copy.

The Aphrodite of Knidos has her claim to fame as being the nude that ushered in the era of Greek nudes. She’s widely considered one of the first and certainly the most famous of Greek nude female sculptures. She gets her name from, well, of course, the subject depicted, Aphrodite, goddess of love, the Roman Venus. And Knidos comes from the ancient city that purchased the statue from Praxiteles. Knidos was located on the southeastern coast of Turkey on a narrow peninsula jutting far out into the Aegean Sea. You might also come across the pronunciation [ni’dus], but that’s just plain silly.

In his work called the Natural History, the 1st century Roman historian Pliny the Elder recounts the story that Praxiteles was commissioned by two cities for a statue of Aphrodite, Knidos and Kos. So, Praxiteles created two different statues of the goddess, one traditional draped figure and then the very Avante-garde nude. Kos, the wealthier of the two cities, got first dibs and went with the less controversial draped Aphrodite and Knidos got the leftovers, although that’s really not fair to say. They still got a Praxiteles. And the world fell in love with her. This controversial nude depiction of a goddess put Knidos on the map. So stunningly beautiful was the work of art, that the goddess Aphrodite herself is said to have asked, “Where did Praxiteles see me naked?” Pliny states that, “…superior to any other statue, not only to others made by Praxiteles himself, but throughout the world, is the Venus, which many people have sailed to Cnidus to see.” People came from far and wide throughout the Mediterranean World to visit her. The citizens of Knidos set her up in a rotunda, a round chapel, so she could be equally admired from all angles. There’s an interesting account of the setting in the Amores:

“…we entered the temple. In the midst thereof sits the goddess–she’s a most beautiful statue of Parian marble–arrogantly smiling a little as a grin parts her lips. Draped by no garment, all her beauty is uncovered and revealed, except in so far as she unobtrusively uses one hand to hide her private parts. So great was the power of the craftsman’s art that the hard unyielding marble did justice to every limb….The temple had a door on both sides for the benefit of those also who wish to have a good view of the goddess from behind, so that no part of her be left unadmired. It’s easy therefore for people to enter by the other door and survey the beauty of her back.”

To add further scandal to this already controversial nude depiction of a goddess, various stories begin to emerge in the centuries following the statue’s debut identifying the famous Greek courtesan Phryne as having supposedly been the model for this sacred icon of the goddess Aphrodite. Other accounts also surface of the supposed romantic affair between Praxiteles and Phryne.

Later during the Roman era, it became vogue for sculptors to produce copies of famous works for wealthy patricians to decorate their villas. The Aphrodite of Knidos was one such statue and her image soon flooded to Roman empire. Figures based on the Aphrodite of Knidos are commonly referred to as “Knidia.” What distinguishes the Knidia from other nude representations of the goddess is the general pose, for one. She’s commonly interpreted as engaging in the rather private act of bathing and we’re peering at her with this almost voyeuristic gaze. Her right arm reaches down seemingly in a gesture of modesty. We see two small bumps on her inner left thigh where two fingers of her right hand one engaged with the thigh. That’s something of a remarkable feature to this Roman copy. The torso and at least the right arm are composed of a single unbroken piece of marble skillfully carved to produce the long curving limb structurally reinforced by its engagement with the hip. Remember from last episode’s Statue of a Seated Woman that it was common for sculptors to carve limbs and other precarious projections separately and then attach them with wooden or metal dowels, or more properly called tenons. So while the Art Institute’s heavily weathered Knidia may not be the hottie that she used to be, she’s still quite artistically remarkable. On her outside left thigh is a fairly long fragmented tab from some now lost section. Most likely the characteristic Roman period support pillar once connected with the rest of the figure at this point.

The support pillar was probably in the shape of a vessel that held the water for her bath. The evidence can be seen in other copies of the Knidia, one of the more famous being the Colonna Venus in the Vatican’s Museo Pio-Clementino. Also the Venus Braschi in the Munich Glyptothek. In her left hand she holds her drapery that she has removed for her ritual cleansing, which is now missing from the Art Institute example. Perhaps our best evidence for the appearance of the original Praxitelean Aphrodite of Knidos comes not from later copies, but from coins, like this 1916 engraving of an ancient coin from Knidos supposedly depicting the original statue. Also, don’t forget … as we’ve seen in many other episodes of the podcast, this statue, too, like so many others, was painted. The 19th century neo-classical sculptor John Gibson shocked audiences when he debuted his Tinted Venus in an attempt to recapture the Classical taste for polychromy.

As we already learned, the Aphrodite of Knidos was one of the most famous statues in her day and extensively copied during the Roman era. There are a bunch of copies existing today, and for each surviving copy we can imagine dozens of copies that didn’t withstand the ravages of time and mankind. The whole notion of a Roman “copy” of a Greek original, though, is a very loaded term that demands a little more attention. When we think of a copy, we likely think of an exact duplicate, like a photocopy. But when we’re talking about Roman copies of Greek statues, the copy in this context can more so be thought of having been inspired by the original. Putting two copies of the same original side-by-side reveal distinct differences. Often the Roman era artists may not have even seen the original, and were working from a description, another copy, or at best a tiny image on a coin. In the case of the Knidia, in the successive centuries, we begin to see some variants on the original form.

One popular variant is dubbed the “Venus Pudica” — the “modest Venus.” A particularly famous example is the Venus de’ Medici in the Uffizi Gallery in Florence, Italy. Here we see both hands of the goddess posed in what are generally interpreted as gestures of modesty, the right hand now at her chest and the left hand below the waist. The drapery is gone and the vessel in this example has been replaced with a small cupid figure riding a dolphin. The dolphin alludes to the sea, out of which, according to one legend, Aphrodite was born. Check out Hesiod’s Theogony around line 175. It’s a bit gruesome, but nothing you can’t handle. You’ll find a link to the full ancient text translated into English at ancientartpodcast.org. Just click on “Ancient Sources on Aphrodite” in the Additional Resources section. There you’ll also find links to some of the other primary sources that we’ve learned about in this episode on the Aphrodite of Knidos. Aphrodite rising from the sea is perhaps most famously captured not in an ancient work of art, but in Sandro Botticelli’s the Birth of Venus from 1482-86, also in the Uffizi. The pose of the goddess by the Florentine master strongly reflects the Venus de’ Medici, which Botticelli had plenty of opportunity to study.

Despite first-hand accounts from ancient sources stating that Aphrodite is covering up her private parts for modesty’s sake, you’ll come across some revisionist interpretations of the gesture not as a shameful attempt to cover her sexuality, but rather to emphasize it. Check out, for example, Christine Mitchell Havelock’s 1995 publication The Aphrodite of Knidos and Her Successors, where the author argues that her nudity signifies her divine birth from the sea, and we’re not catching her off guard at her bath. Rather, the vessel is for ritual cleansing and renewal. So, we shouldn’t necessarily take any interpretation at its face value, even an ancient one. But it’s important to remember that our own contemporary culture can easily be a filter that shapes and guides our interpretations. And that’s what makes art the gift that keeps on giving.

Don’t forget to check out ancientartpodcast.org for image credits, bibliographic references, and links to lots of other relevant things. I appreciate your feedback and suggestions for future episodes. You can reach me at info@ancientartpodcast.org or with the feedback form on the website. You’ll find me on Twitter at lucaslivingston. And you can leave your comments on YouTube, iTunes, or on the website itself. You might have heard that the Art Institute of Chicago’s podcast Musecast has reached its final episode, but don’t worry. The Ancient Art Podcast ain’t goin’ anywhere! Thanks for listening and see you next time on the Ancient Art Podcast.