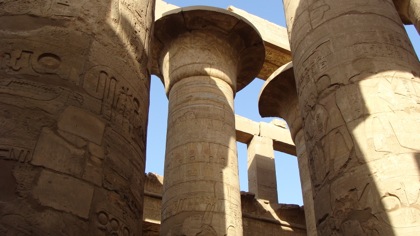 Welcome back to the Ancient Art Podcast. This is Lucas Livingston, the peanut butter to your jelly on our ancient journey. Last time in episode 29, “Karnak,” we just scratched the surface or strolled the causeway, as it were, on our exploration of Egypt’s largest temple complex. In this episode, we’ll delve deeper into the precinct of Amun at Karnak, deciphering ancient imagery on the walls, reenacting an ancient festival, and breathing new life into the silent ruins.

When we were last together, we wrapped up in the forecourt of Karnak between the first and second pylons looking at the unfinished columns and the leftover mud brick scaffolding of the first pylon.

Just beyond the forecourt and second pylon is the Great Hypostyle Hall consisting of 134 papyrus-shaped columns. A “hypostyle hall” is a large room with a flat ceiling supported by columns. This space and much of the temple were originally roofed. The center 12 columns with open papyrus capitals are taller than the surrounding 122 columns, forming a section where the roof was elevated above the rest, connected by windows to let in some natural light. That technique is called clerestory lighting and it’s a common feature to Egyptian, Roman, and later Christian sacred architecture.

The decoration on the walls and columns in the hypostyle hall depict ritualistic imagery, offerings of the kings to the gods, and the procession of the sacred barque–that’s B-A-R-Q-U-E–a fancy-looking model boat that held the statue of the god. On the exterior walls of the hypostyle hall and much of the rest of the temple, we see battle scenes commemorating Pharaoh’s military victories over the enemies of Egypt. Occasionally it’s an attempt at history, but more often than not it’s a publicly accessible, propagandistic symbol of Egypt’s subjugation and authority over foreign lands and hostile forces of chaos. A fairly common motif is the larger-than-life Pharaoh grabbing a throng of enemies by their hair, ready to bash their heads in with a mace. Here’s Sety I, for example, father of Ramses the Great. Notice all those little grooves where the stone has been slowly carved away by worshippers. This practice started in ancient times and continued well after the temple had ceased religious activity. Much in the same way that Ancient Egyptian mummies would get pulverized and mixed with various ingredients for magical and medicinal concoctions, visitors to Ancient Egyptian temples like Karnak similarly recognized the temple’s magical power and sought to take home a little bit of that power in a powdered form. [1] So on the outside you get big political imagery of Pharaoh smiting enemies and on the inside you get religious imagery pertaining to the action taking place inside the temple and on festival days.

Another interesting thing about this relatively common depiction of Pharaoh smiting the enemies of Egypt is that they’re quite clearly depicted with frontal faces. It’s exceedingly rare to have a frontal face in Ancient Egyptian two-dimensional art. Back in episode 9 of the podcast, “Walk Like an Egyptian”, we touched on this phenomenon with the Mummy Case of Paankhenamun. The conventions of Egyptian artistic doctrine don’t apply here in the case of depicting foreigners. It’s not that the Egyptians didn’t know how to render a frontal face. Case in point. Rather, it’s that the complex relationship of state art, hieroglyphs, and Ma’at (cosmic world order and philosophical truth) limit the use of a frontal Egyptian face in painting and relief carving.

There’s one frontal face that’s relatively common in Egyptian art, which we see here on the obelisk of Pharaoh Tuthmosis I. It’s part of a Hieroglyphic inscription. This common hieroglyph is the preposition “on” or “upon.” So, you might be tempted to say, “See, look here. The frontal face is abundant in Egyptian two-dimensional art,” but it’s important to note that this is writing. It’s language. And even though I’m constantly emphasizing that hieroglyphs and art are inextricably related, sometimes writing is writing and art is art. This hieroglyph got its 15 minutes of fame not too long ago with President Barack Obama’s visit to Egypt back on June 4, 2009. He’s actually quoted as having pointed at that same hieroglyph inscribed on the walls of the Tomb of Qar at Giza and exclaimed, “That looks like me! Look at those ears.” Now, just how many presidents of the United States could express some sort of personal identification with an African nation? Huh?

As you go deeper into Karnak temple, the rooms gradually become smaller, the ceiling lower, and the floor slightly elevated. Think of it like an obelisk lying on its side: a wide base at the front of the temple, gradually tapering to a point at the head or what’s called the “naos,” where the statue of the god Amun was kept. Only a few elite priests were permitted to enter the naos, to clothe and cleanse the god. On certain festival days, the image of the god would be carried out of the naos on his barque shrine, that fancy model boat I already mentioned. Probably the most anticipated festival at Karnak was “the Beautiful Feast of Opet,” held annually during the inundation season. The Opet festival was a celebration of the Nile flood and its symbolic fertility as people across Egypt began planting their crops. The image of the Amun was carried through the temple as everyday Egyptian gathered around gawking at the god. If you look around the Great Hypostyle Hall, you’ll see funny-looking images of a bird with human hands raised up in adoration. That bird’s the Egyptian hieroglyph for “rekhyt,” which was the Egyptian word for themselves, the Egyptians. It’s thought that that glyph indicated to the people where they were allowed to stand during the festival. [2] There’s also this nifty little alabaster block decorated with images of bound, captive foreigners and bows. They represent the “nine bows,” Egypt’s enemies, although the actual number and national identity varies. It’s thought that this block was a rest stop for the priests to place the barque of Amun on its sacred procession. [3] So by placing the barque of Amun on top of the nine bows, the Egyptians were making a symbolic statement of political dominance over its enemies. A very well known representation of the nine bows is found on the sandals of King Tut, so with every step, he was treading over his enemies. The barque’s journey during the Opet festival continued along the south axis, out of the temple, around the sanctuary of Mut and south along the avenue of sphinxes to Luxor temple. After hanging out there for a while, it was brought back to Karnak, at times on land and at times along the Nile.

The relationship of land to water plays a big role in the architectural symbolism and programmatic vision of Ancient Egyptian temples. One interpretation of Egyptian temple architecture is that it models the creation of the universe, according to the popular Theban cosmogony. According to one tradition, the cosmos began as the primeval swirling waters, Nun. From this infinite ocean emerged a mound of earth where a single lotus blossom flowered. Within that flowering lotus was born the infant god Nefertem, and from his tears all the creatures of the world were formed. There are oodles of variants to this story as different cults rise to prominence and get folded into the mythology, but regardless of the fine points, the Egyptian temple is often seen as embodying the idea of creation from the primordial swamp. The rise in elevation of the floor from the temple entrance to the naos might reflect the primeval mound of earth, a little bit of cosmic order in an otherwise chaotic watery void. Similarly, the Egyptian hieroglyph for cosmic world order, the taming of natural chaos, is a stylized mound or the pedestal upon which the image of a god would stand, ma’at, which we’ve already encountered back in episodes 2, “Mummy Case of Paankhenamun”, and 9, “Walk Like an Egyptian”. Even more to the point, the columns decorating the many courts and halls of Egyptian temples were shaped to represent a variety of lotus, palm, and papyrus plants found along the Nile, having found their origin in the primordial swamp. Temple walls, much like tombs, were also sometimes decorated with marsh scenes. And to bring it all home, there’s evidence and testimony through royal inscription that temple forecourts were actually flooded now and again by the Nile’s annual inundation, which would have tied in beautifully with the temple as a concrete manifestation of the force of creation … well, not concrete, mostly limestone or sandstone. Yeah. [4]

So, there’s a lot going on in Karnak and other Egyptian temples. Even today, in their somewhat ruined state with sun-bleached walls, fragmentary sculpture, and eroding inscriptions, these mansions of the gods offer up a very palpable, if not mystical and spiritual experience of one of the greatest civilizations of the ancient world.