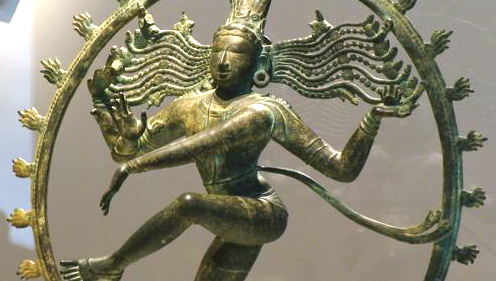 Welcome back to the Ancient Art Podcast. In the Hindu narrative of the cosmos, the world exists in a never-ending cyclic journey of creation, existence, and destruction. As we discovered in episode 28 on the “Avatars of Vishnu,” the Trimurti, the three primary Hindu divinities, regulate this cosmic cycle. Brahma, the Creator, brings the cosmos into being. Vishnu, the Preserver, ensures the world continues on it’s path until the cycle comes to a close. And then Shiva, god of death and destruction, skin smeared white with the ashes of the cremated dead. When the world-age comes to a close, when the perfect creation is so consumed by corruption and vice, Shiva’s job is to push the restart button and send the cosmos into a fiery conflagration. From the third eye on Shiva’s forehead comes a fiery stream immolating the cosmos. And rising from the ashes, the cosmos is born again.

Shiva Nataraja, the Lord of the Dance. … [musical excerpt 1] … None of that silliness. Different Lord of the Dance, here. Shiva Nataraja is a very popular form of the god Shiva. You’ll find him all over India, particularly in the south, in chachki shops across the world, and in many different museum collections, including the Art Institute of Chicago and the Snite Museum of Art at the University of Notre Dame. In this form, Shiva embodies not only cosmic destruction but also creation, the whole cosmic cycle wrapped up into one form ensconced within a fiery nimbus or aureole, tongues of flame licking the air about him.

The aureole of fire surrounding Shiva beautifully captures the notion of cyclic creation and destruction. You can’t have one without the other. Creation begets destruction, which in turn begets creation. And fire symbolizes both destruction and creation. The destructive force of fire is readily apparent, but as a creative force … Imagine when a fire burns down a forest. Eventually from those smoldering ashes on the forest floor new life begins to shoot forth. Fire also produces something new and different. When a house burns down, you no longer have a house. You now have a smoking pile of cinders, but it’s something different. A new state of matter.

The form of Shiva Nataraja has multiple arms — generally four. Each arm has a specific symbolic function or message. In his upper left palm he holds a single flickering flame. In it’s appearance here, the flame represents the force of destruction. Opposite destruction in his upper right hand he holds a little hour-glass-shaped drum, like a bongo drum, which he uses to beat out the rhythm of life and creation. The drum also stands for sound, which is related to the primordial element of ether. Before there was anything else, there was ether, and from ether all the other elements — earth, air, fire, and water — were created, and from all of that the whole cosmos was formed.

So, between the symbols that Shiva holds in these two hands, creation and destruction are brought together by the god, unified into a circular constant enclosed within the unending swirl of fire around him. Sound familiar? Back in episode 17 on the “Alsdorf Galleries of Indian, Southeast Asian, Himalayan, and Islamic Art” we looked at Kartikeya, the God of War. There we saw a message of peaceful internal harmony achieved through the unity and balance of our inner opposite forces of masculinity and femininity through the vajra and lotus. We also saw a balance of the celestial and earthly realms through the peacock with the snake in its mouth. Shiva Nataraja expresses a cosmic balance through the union of the diametric opposites of creation and destruction.

Speaking of balance, Shiva’s striking quite the dance pose. Go on and give it a whirl. See if you can do the Shiva Nataraja. … [musical excerpt 3] … Dance is thought to invoke a meditative trace-like state. In this case, Shiva’s dance, called Tandava, heralds his destruction of the world, from which the world is then reborn. Dance is also a creative act in that you’re continuously in motion undergoing a constant change of form and state. It’s like that old adage from the Greek philosopher Heraclitus of Ephesus, “You can’t step into the same river twice,” because it’s constantly flowing and changing.

What’s that under Shiva’s foot? In an age before political correctness, this mythological dwarf figure represents ignorance and forgetfulness of the right way to live according to dharma, the rule of law. So, Shiva’s stamping down on him, pounding out the ignorance and our inner human vices that seek to block us on our path to enlightenment. Notice his left leg, how it’s lifted up, released from the obstacle to enlightenment. And then his hand calls attention to his lifted leg, but what’s going on with that hand? If Shiva wanted to call our attention to his uplifted leg, why doesn’t he just point normally? What’s with the curious contortion of that left arm? Well, back in episode 17 with Kartikeya, we learned about “mudras,” hand gestures that convey specific messages. In the case of Shiva’s arm here, that’s a mudra meant to remind us of the swaying of an elephant’s trunk. Now, where else in the vast corpus of Hinduism do we encounter an elephant? How about Ganesha, the god with the elephant head? Ganesha, or Ganesh, is commonly known as the Remover of Obstacles, so here Shiva calls our attention to his uplifted leg, removed from the obstacle to enlightenment, while invoking Ganesha, the Remover of Obstacles. Ganesha is also the son of Shiva and his wife Parvati, so Shiva’s giving a little shout out here to his son.

The figure of Shiva Nataraja is so saturated with imagery, symbolism, and spiritual significance, that we could easily spend an hour exploring every nuance, nook, and cranny, but then I’d be the only one still listening to this podcast. So we’re going to call it a day and hope that the Lord of the Dance has inspired you to strike a pose conducive to a harmonious union to your dual natures, achieving an enlightened state of inner peace. But don’t go all celestial on me and cast off the banal worldly indulgence of listening to the Ancient Art Podcast.

Check out ancientartpodcast.org for the full transcript, image gallery and credits, and additional resources to this and other episodes of the podcast. You can be one of the cool kids too, if you add a review on iTunes or leave a comment on YouTube. If you have any questions or comments, you can email me at info@ancientartpodcast.org or get in touch with the feedback form on the website. You can friend the podcast at facebook.ancientartpodcast.org and follow me on Twitter at lucaslivingston. I hope you had fun and I’ll see you next time on the Ancient Art Podcast.

[0] Opening jingle from Apple Garageband, “Jakarta”
[1] Michael Flatley’s Lord of the Dance and Monty Python and the Holy Grail
[2] Stayin’ Alive by the Bee Gees
[3] The Hustle by Van McCoy and the Soul City Symphony