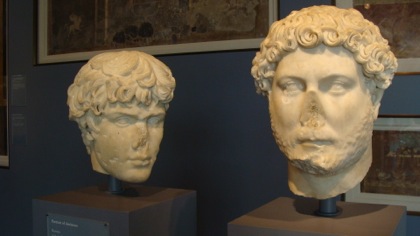 Hello and welcome back to the Ancient Art Podcast. I’m your friendly traveling companion, Lucas Livingston. Back in episode 25 we took a gander at a beheaded beauty at the Art Institute of Chicago. The Art Institute has a few other headless wonders from the Roman era and an equal number of disembodied heads to go along for the ride. It’s like chocolate in my peanut butter.

Two particularly attractive heads are of the emperor Hadrian and his young, um, let’s say “intern” Antinous from the second century of the common era. One of the most beloved emperors in Roman history, Hadrian continued to be admired well into the Christian era. His name is perhaps most recognized today in the so-called “Hadrian’s Wall” in northern England. I say “so-called,” because that’s what we call it, not what the Romans called it. A popular tourist attraction today, Hadrian’s Wall was constructed in AD 122, in the fifth year of Hadrian’s reign. It’s generally thought that the wall at that time marked the northern frontier of the Roman Empire.

Hadrian ruled from AD 117 to 138 and is immediately recognizable from his characteristic features. Hadrian was he first Roman emperor to wear a beard, well, except for that Nero fella, but we’ll just pretend that whole episode never happened. [1] The beard then became quite fashionable after Hadrian and every Roman emperor had one, for better or for worse, up until Constantine, the first Christian emperor from AD 306 to 337. But what else distinguishes portraits of Hadrian from any other bearded Roman? Notice the deep drilling into the stone. Hadrian has a characteristic hairstyle with thick, heavy locks waving frantically. This might convey a feeling of anxiety or wildness. As one of Rome’s most beloved emperors, Hadrian didn’t need to put on heirs of a refined, sculpted aristocrat. He was an emperor of the people and his images might invoke a down-to-earth sort of feeling that the public would receive well. Imperial sculpture of the Hadrianic era also reflects a certain Classical Greek sensibility, again, in the hair, with the tight curls forming a distinctive bowl cut looking like it might just want to get up and jump off his head.

Oh, woops, wrong slide. Now how did that get in there? We see a similar rendering of the hair on certain Greek statuary, notably of Apollo.

This image of Hadrian also looks like him. That’s the funny thing about portraits. They generally look like the individuals. Imagine that! Or at least it conforms to the conventional portrait type of Hadrian invented by the Roman propaganda machine and disseminated throughout the empire. Also innovative to the reign of Hadrian is the subtle modeling of the eyes, gently drilling the pupils. Prior to this moment, Roman sculpture generally relied on paint to add definition of the eyes, as with earlier Greek and Egyptian sculpture.

Hadrian was well known for his Philhellene tendencies, and that has nothing to do with adolescents. A Philhellene is a lover of all things Greek. Among Hadrian’s many posts along the political ladder was the governorship of Greece, then a territory in the sprawling Roman Empire. Hadrian considered himself to be a subscriber to Greek Stoic and Epicurean philosophy and some historians past and present ascribe his desire for a beard to this tendency, because all good Greek philosophers wore beards. But what would good history be without controversy? Another interpretation posited by ancient historians was that Hadrian had either very bad skin or a big scar, so the beard was simply to cover that up. [2]

Despite the earlier statement above, Hadrian’s Philhellenistic enthusiasm did, in fact, extend to adolescents. Enter Antinous.

Antinous was born to a Greek family in Bithynia, Anatolia, present-day Turkey. According to one version of events, in AD 124, at the ripe age of 13 or 14, marital age for young men in Roman society, Antinous joined Hadrian’s entourage as it was passing through Bithynia. Another account was that Hadrian had the entirety of the Roman Empire scoured for most beautiful youth … and that happened to be Antinous.

For six years Hadrian paraded Antinous around as his arm candy. Then in October of the year 130, while vacationing in Egypt, Antinous mysteriously drowned in Nile. In a true-to-life unsolved mystery along the Nile, ancient historians debated whether this was an accident, suicide, murder, or maybe even a ritual sacrifice. [3] Whatever the cause and whether or not Hadrian was in any way involved, he sure didn’t let on that way. In a state of mourning of epic proportions, Hadrian’s grief knew no bounds. He named cities after the lost beloved youth, like Antinoopolis in Egypt, also called Antinoe. Medals were struck with his effigy and statues of Antinous were erected throughout the empire. Hadrian also minted coinage with Antinous’s visage. He’s one of the few non-imperial individuals ever to have their faces on Roman coins. Also Cleopatra. There’s a great coin at the Art Institute of Chicago showing Cleopatra on one side and Mark Antony on the other. And if you’re especially good, maybe we’ll take a closer look at this coin in a later episode. What’s really wonderful about ancient coinage is that you generally get an image with an inscription. So, coins of Antinous become the templates to which other images are compared for identification. This fragmented statue of Antinous at the Art Institute is representative of the images Hadrian spread far and wide.

The images of Hadrian and Antinous are stylistically similar, of the same stone and with careful, deeply carved locks of hair. Antinous turns his head slightly to the left with a bit of a downward glance, gazing off into the distance. The installation here, though, gets a gold star for curatorial choice, because Antinous appears to be looking fondly upon his emperor, suggesting the affection they shared.

Hadrian went to great lengths to ensure that Antinous would not be forgotten, including deifying the youth. Temples to Antinous were erected in his native Bithynia, Arcadia, and Athens. He was depicted as the Roman god Bacchus, god of fertility, and as the Egyptian god Osiris, god of death and resurrection. To early historians, Osiris and Bacchus or the Greek Dionysus were considered one in the same, as both cults celebrate fertility and both gods share a death, dismemberment, and resurrection mythology, but that definitely needs to wait until another episode to be explored in greater depth.

Modern scholars and connoisseurs take the whole matter of hairdos very seriously when identifying a particular image as Antinous. And we have to be careful, because our perception of what was popular in antiquity can get skewed by what has been popular more recently. Images of Antinous were crazy popular in the 17th and 18th centuries to the point that any 2nd or 3rd century figure of an unidentified, slender youth with wildly articulated hair got the name Antinous slapped on it. Why? Profit margin. What dealer would sell an image of an “unidentified youth” when he could sell an “Antinous” for twice the price? “Antinous” became a figural type, similar to how all Archaic kouros figures were once commonly referred to as “Apollo” figures, as we briefly touched on at the end of episode 16 on the Metropolitan Kouros. The more modern popularity of the “Anitnous” name has also elevated Antinous to be regarded as one of most widely preserved faces from the ancient world, which many of the West’s great museums can boast having in their collections. You also have to be wary of restorations. It’s indeed possible to have a spot-on Antinous only to discover that most of the head was carved in modern times. Case in point: the heavily restored Antinous from the Palazzo Altemps in Rome.

Images of Antinous loomed larger than the human, himself, leading to a trend in artistic convention for idealized, youthful male beauty. It’s indeed conceivable that some Antinous figures could simply be unidentified youths, or even youths in the guise of or inspired by Antinous. For example, when the rich and famous 2nd century Greek aristocrat, Sophist philosopher, and politician Herodes Atticus lost his young intern Polydeuces, much like Hadrian, Herodes Atticus commissioned funerary games and commemorative sculpture on a lavish scale. And some scholars argue that images of Polydeuces intentionally mimicked the Antinous-style to elevate Polydeuces to that same semi-divine status and to elevate Herodes Atticus, himself, to the status of Hardian. To distinguish the two, Polydeuces is generally considered to have a slightly upward gaze and a more petulant or sassy look, versus Antinous’s downward, demure expression.

With his long, luscious, deeply drilled curls cascading over his temples and forehead, a thick fringe of hair covering the nape of his neck, slender, angular features, and his downward gaze, the Art Institute’s image of Antinous fits squarely in the popularly accepted Antinous morphology. And its current installation, standing here demurely beside the proud emperor, never to leave his side, weaves a wonderful narrative of adventure, love, mystery, tragedy, and the exaltation of Hadrian’s immortal beloved.

Check out ancientartpodcast.org for the complete transcript to this and every episode, image galleries with credits, and an extensive bibliography. Increase your karma and add a review on iTunes or leave a comment on YouTube. If you have any questions or comments, you can email me at info@ancientartpodcast.org or get in touch with the feedback form on the website. You can friend the podcast at facebook.com/ancientartpodcast and follow me on Twitter at lucaslivingston. I hope you had fun and I’ll see you next time on the Ancient Art Podcast.

One Reply to “32: Hadrian and Antinous”