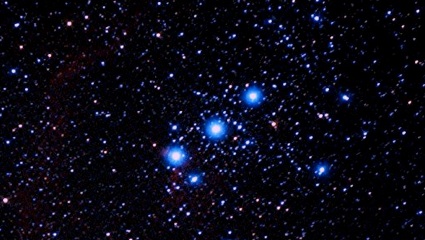 Continuing our countdown of the Top 10 Ancient Egyptian Myths and Misconceptions, we come to “Number 9: The Orion Mystery.”

In 1994, construction engineer Robert Bauval and publishing consultant Adrian Gilbert published a bestselling book call The Orion Mystery. Bauval went on to co-author later spinoffs with Graham Hancock. The major thesis of The Orion Mystery or the so-called “Orion Correlation Theory” suggests that the pyramids of Giza were constructed to match up with the stars that form the belt of the constellation Orion. See how Menkaura’s pyramid is smaller and a bit offset, just like the slightly-dimmer third star in Orion’s belt? The theory also expands, saying that other pyramids were mapped out to the rest of the constellation.

They also suggest that shafts within the Great Pyramid of Khufu were designed to point to certain celestial bodies. Within the Great Pyramid, there are these hollow shafts that ascend at sharp angles from the burial chamber, or the so-called “King’s Chamber,” and the so-called “Queen’s Chamber.” If you were to extend these shafts out into the sky like spotlights, they say that the southern shaft in the King’s Chamber would point to Orion and the northern shaft to what would have been the pole star of the mid-third millennium BC (the time of the pyramids), and the southern shaft in the Queen’s Chamber would point to the star Sirius, while its northern shaft to the Little Dipper, Ursa Minor.

All four of those points had specific significance to the Ancient Egyptians. In Ancient Egyptian astronomy, there’s evidence to support that the constellation we know today as Orion was known to the Egyptians as Osiris, or actually called “Sah,” “the glorious soul of Osiris.” [1] The star Sirius was equated with Isis and was also very important to the Egyptian calendrical system. [2] Rewind back to episode 8 on “Cicadas” for more about that. And the Little Dipper looks remarkably similar to the Egyptian adze used in the Opening of the Mouth funeral ceremony. Of course, you know it’s really a bear, the Little Dipper. “Ursa Minor” = “Little Bear.”

Egyptologists have lain out plenty of arguments against the Egyptians having deliberately attempted to map out the heavens on Earth, but the whole thing’s actually kinda neat, I mean, “intriguing.” I think it’d be pretty cool if this were conclusively true, but as soon as you get past the three pyramids of Giza, things quickly unravel. The authors almost seemingly picked random features of the ancient landscape to unconvincingly match up to celestial bodies. They often interpret the archaeology and ancient texts to fit their theory (but isn’t everybody just a little bit guilty of that?) Some naysayers argue that Osiris or “Sah” was only later-on equated with the whole constellation Orion, whereas that at the time of the pyramids, the Egyptians equated Osiris with only one star, Rigel, Orion’s proper left foot. [3] And that makes more sense, since the Pyramid Texts often refer to Osiris as to the “Toe-star.” [4] The whole Orion Correlation Theory also assumes that the Egyptians had a grand master plan spanning many generations of pyramid-building Pharaohs, which would have had to have begun even before the Giza pyramids. Why would Khufu’s father Sneferu have chosen to build his pyramids elsewhere nearby, leaving the choicest spots of Orion’s belt to his successors? In short, there was nothing special about the belt of Orion to the builders of the pyramids.

Despite the evidence against it, though, there could actually be something to the Orion Correlation Theory. Unfortunately, the authors didn’t know when to leave well enough alone. Riding on the success of The Orion Mystery, Bauval and Hancock jump on the bandwagon of a plethora of other phenomenal theories in Fingerprints of the Gods: that the Sphinx is actually many thousands of years older than Egyptian civilization; that the Great Pyramid served as a mathematical scale model of the Earth; and that there was some sort of lost pre-historic civilization that was wiped out, whose few survivors were dispersed throughout the world and sewed the seeds for many of the world’s ancient cultures, from the Olmecs to the Egyptians … ah, yes, the ever-so-wonderful Atlantis theory.

Of course, if you’re a believer or a conspiracy theorist, nothing anyone says will convince you otherwise. So we’ll just have to agree to disagree and move on.

[3] Clarification: left or right is entirely subjective, depending on the interpretation of the stars that make up the constellation Orion. Over time people have conceived of the hunter Orion as seen from the front or behind, facing right or left. The illustration used in this episode (adapted from Joannes Hevelius’s 1690 Uranographia for Celestia software) depicts Orion facing right as seen from behind, hence Rigel would actually be Orion’s right foot. In contrast, yours truly has always pictured the constellation Orion as facing forward, hence Rigel being his proper left foot.