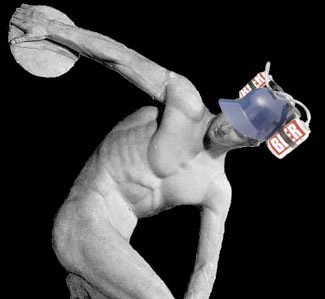 Alright team, fall in! It’s coach Lucas Livingston here and it’s time for part two of the Ancient Olympics on the Ancient Art Podcast. Last time we found out about the historical and mythological foundation of the ancient Olympics. We heard a bit about the Twelve Labors of Hercules and the tragic family line of Pelops and Hippodameia, also called the House of Atreus. And we wrapped up with a teaser about funerary celebrations going hand-in-hand with athletic games.

This time we’ll continue to explore the idea of a tragic untimely demise as a good reason to hold an athletic contest. We’ll take a close look at some very early Greek artwork dated to about the time of the foundation of the Olympic games, which may suggest chariot racing. And then we’ll try to get a grip — so to speak — on the whole idea of nudity in the ancient games. So, stand up, put on your beer hats, and paint your faces, because it’s game on!

Funeral games are a big deal in Ancient Greek stories and history. Many of the foundation myths of the more famous Greek Games are centered around honoring someone’s tragic death. The Pythian Games at Delphi are said to have begun to pay honor to the nymph Daphne, who was transformed into a laurel tree to escape the amorous clutches of the god Apollo. This famous story has been captured by a lot of artists and authors throughout the centuries. Most notable perhaps are the passage from Ovid’s Metamorphoses, a collection of tales involving various physical transformations, and this magnificent marble masterpiece by baroque sculptor Bernini in Rome. And since Daphne transformed into a laurel tree, that’s why victors at the Pythian Games were crowned with a wreath of laurel. The ancient games at Nemea were held in honor of the death of the infant boy Opheltes, who was bitten by a snake while lying in a bed of celery. Hence, victors of the Nemean Games were crowned with a wreath of wild celery. And the Isthmian Games were established as funeral games for another infant boy Melikertes, also called Palaimon, who died clutched in his mother’s arms as she threw herself from a high cliff into the unforgiving sea to escape her wrathful husband driven mad by the gods. The boy’s body was brought ashore by dolphins to a pine grove at Isthmia sacred to the god Poseidon, hence a crown of pine for those victors. You see where we’re going here? These four games, the Olympian, the Pythian, the Nemean, and the Isthmian, are called the crown games, because the victors were all awarded with crowns instead of money. We also have the money games, which are found throughout the entire Greek world. Sometimes just local and sometimes huge and rivaling the scale of the crown games, like the Grand Panathenaia at Athens.

Funeral games feature prominently in literature too. Towards the end of the Iliad in book 23 we see Achilles organizing funeral games to honor the heroic death and memory of his young side-kick Patroklos. The Iliad is a fascinating archaeological artifact. Though the date of its composition is hotly debated, it’s generally considered to be in the 8th century BC plus or minus a century. For generations it was passed down not through manuscripts, but by oral tradition — by memorization and recitation for performance. It crystallized some time in the 7th or 6th century BC into the form that has come down to us today. The poem looks back to the mythological heroes of the Mycenaean Bronze Age civilization from about 1600 to 1100 BC, but it shows clear and obvious examples of the Iron Age culture contemporary to that Homer fellow (if he ever even existed, but I digress). The value of the Iliad to Greek athletics lies in the thorough description of the different events at the funeral games of Patroklos. Two events that receive a lot of attention in the Iliad are the chariot race and footrace. Here’s a great translation by Stephen Miller, author of Ancient Greek Athletics, although I paraphrase in part to keep a PG rating:

“Ajax was in front, but Odysseus was running so close behind that his feet were hitting Ajax’s tracks before the dust could settle back into them, and his breath was hitting the back of Ajax’s neck. All the Achaians were cheering his effort to win, shouting for him to pour it on. But when they were in the stretch, Odysseus said a silent prayer to the gray-eyed Athena, ‘Hear me, Goddess; be kind to me, and come with extra strength for my feet.’ So he prayed, and Pallas Athena heard him, and lightened his limbs, feet, and arms too. As they were making their final spring for the prize, Ajax slipped and fell (Athena tripped him) where dung was scattered on the ground from bellowing oxen, and he got the stuff in his mouth and up his nose. So Odysseus took away the mixing bowl, because he finished first, and the ox went to Ajax, He stood with his hands on the horns of the ox, spitting out dung, and said to the Argives, ‘Oh [crap]! That goddess tripped me, that goddess who has always stood by Odysseus and cared for him like a mother.’” (Stephen Miller, Ancient Greek Athletics, Yale University Press, 2004, page 30)

The popularity of these athletic events can also be seen in the artwork contemporary to the composition of the Homeric epics and the foundation of the Olympics, like on this Geometric Period pyxis at the Art Institute of Chicago from about 760-735 BC, with a team of four neatly assembled horses decorating the lid. We can imagine the chariot that was attached to this four-horse quadriga, or in Greek tethrippon. And also on this giant Geometric Period krater or mixing bowl at the Metropolitan Museum of Art from about 750-735 BC. On it you can see a body lying in state with mourners assembled all around, and in the lower register alternating depictions of charioteers and soldiers race along. Note that this vessel comes nearly 400 years after the Bronze Age period, but the figures on foot carry the trademark Bronze Age style figure-eight shields from centuries earlier. So, just as rhapsodes singing the Iliad and Odyssey are looking back to the mythic heroes of Mycenae, so too are the artists of this time as they decorate the Geometric style vases.

Charioteers and runners continued to be the favored athletic subjects of Greek vase painting through the Classical and Hellenistic periods. Athletic events at the Greek games can be broken up into two basic categories: the gymnikos agon and hippikos agon.

Agon basically means a game, contest, or athletic event. It’s the Greek word from which we get “agony.” Agony in its most basic sense is the strife, struggle, and sacrifice endured in pursuit of victory. Gymnikos means “nude,” so the gymnikos agon are the “nude games,” whereas the hippokos agon refer to the “horse games,” which include a few different mounted and horse-drawn races. Considering the popularity of chariot races, though, it’s ironic that they didn’t become an official part of the Olympics until 680 BC, a good century after the supposed foundation of the Olympics and after the incorporation of nearly all the nude events.

So, what’s the deal with all the nudity? Nudity in ancient Greek athletics is perhaps the most quintessentially Greek aspect to the games. It’s the equalizer of men. Competing in the nude, no one could argue that the latest Adidas nanotechnology swim suite gave anyone a leg up on the competition. Nudity preserved the essential democratic nature of Greek athletics. It also prevented preference or prejudice based on social class. All discriminating demarcations are stripped from the competitors, who must rely on their skill and strength alone. We’re all the same when stripped down to our bareness romping in the dirt, oil, and sweat. We’re all Greek citizens.

Nobody knows for sure when or how the idea of competing in the nude came about. Various ancient sources provide us with amusing accounts of loincloths falling off mid-race, only to learn that nudity supposedly provided a possible competitive edge. One common association of the nude athlete is with the ancient mythic hero. You might remember back in episode 6 on the Classical white-ground lekythos — the oil jar — we learned that the nude figure here presents an interesting duality of the youthful nude athlete and the epic hero. We also saw this more recently in episode 16 on the Metropolitan Kouros. Perhaps this noble association was also aspired to by athletes in the nude on the field at ancient Olympia. And it makes extra sense to have the nude epic hero depicted on the lekythos, because that’s one sort of jar that athletes in the gymnasium would have used to dispense oil. There are a few different interpretations for the use of oil in Greek athletics. Rubbing olive oil into your skin before a competition would give your body a lovely glistening sheen. We can attest to this from WWF ca. 1985. There could also be some sort of ritual libation significance to rubbing oil over one’s body. What might make the most sense, though, is the cleansing purpose of oil after the match. After accumulating all the sweat, dirt, sand, blood, and other filth of a match, you’d run a strigil down your limbs and the oil acted like a nice lubricant, so the grime had a harder time sticking to you. We looked a little more closely back in episode 6 at this example of a strigil from the Boston Museum of Fine Arts.

That’s about all the time we have for this episode. Tune in next time for part 3 on the Ancient Olympics as we tour the variety of athletic events, both the nude games and the horse races. Questions, comments, suggestions? You can email me at info@ancientartpodcast.org. Or visit the website and click on “feedback” at the top of the page. While you’re there, please take a minute to fill out the survey to help me get a better sense of who’s listening. iTunes reviews help get the podcast noticed, so please consider sharing the love. You can also add your comments next to each episode at ancientartpodcast.org. Thanks for tuning in and see you next time on the Ancient Art Podcast.