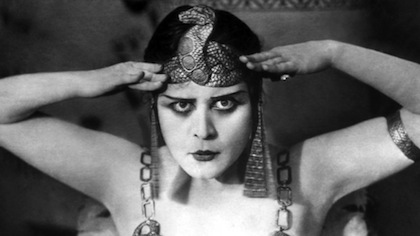 Hello fellow travelers and welcome back to the Ancient Art Podcast. I’m your host, Lucas Livingston. Pounding out #2 in our list of the Top 10 Ancient Egyptian Myths and Misconceptions, we come to the myth that Cleopatra, Nefertiti, or whomever was or was not black, white, or some other racial profile. I reckon this episode may get more than its fair share of heated comments, judging by other episodes that touch on race in the ancient world, and we almost don’t even need to belabor the point with this episode, but I composed the top ten list well before I started podcasting it. So, dang-gummit, this episode must be included.

The ambiguity in the title is quite intentional. It reflects how both sides of the argument continue to be fought about the racial identity of various famous ancient people, most notably Cleopatra and Nefertiti. So you can just insert your own preferred individual or race in the title. And the fact that this issue resonates so gut-wrenchingly personally with some people betrays that the question is truly much more a reflection of contemporary society and racial identity rather than a historical question. As I put it back in episode 22, Nefertiti, Devonia, Michael, “blame it on the African diaspora, Western imperialism, or Ellis Island,” but this obsession over whether the Ancient Egyptians were black, white, Greek, Berber, Nilotic, or other is entirely a modern construction. Like America today, Ancient Egypt was a very mixed population, and it was an immensely large nation stretching from the Mediterranean all the way to subsaharan Africa. One encounters significant genetic variation across this vast stretch of land and the thousands of years of Egyptian history, but there’s no evidence that they actually cared what color your skin was or the skin of your parents. So the question is moot. What mattered to the Ancient Egyptians was that you were culturally Egyptian.

We already had an in depth discussion of Nefertiti back in episode 22, so we’re not going to repeat that here. But what about Cleopatra? Her name is invoked in this topic perhaps even more frequently than Nefertiti. The last Pharaoh of Egypt, Cleopatra VII Philopator, ruled from 51 to 30 BC in part as coregent. As with other members of the Ptolemaic line, her ancestors were Macedonian Greek, descending from Ptolemy I Soter, one of Alexander the Great’s generals roughly 300 years earlier. Contemporary to Cleopatra, the Greek historian Strabo suggested that she was the illegitimate daughter of Ptolemy XII Auletes and an Egyptian noble woman. Alternatively and more popularly, Cleo’s mother is thought to have been Cleopatra V Tryphaena, among other theories. If her parents were Ptolemy XII and Cleopatra V, that would be interesting, because each of them, in turn, is thought to be an illegitimate child of a Ptolemy and different Egyptian women. So if Cleopatra’s mother, herself, wasn’t Egyptian, then perhaps both of her grandmothers were. Or not. Blame the Ancient Roman love/hate relationship with Cleopatra for all the confusing and conflicting accounts.

What’s well attested, however, is that Cleopatra was well accepted and loved by the Egyptian people. She was the first of the Ptolemaic rulers to even bother to learn Egyptian. As with her forebears, images of her were produced in the traditional Egyptian style when for an Egyptian audience, and in a Greek style for her Greek audience. And even for her Roman audience, Cleopatra’s images display a remarkable flexibility for a largely propagandistic value. This silver tetradrachma coin from about 36 BC now in the Art Institute of Chicago displays Cleopatra’s final lover, Roman general Mark Antony, on one side with quintessential Roman features. Check out that nose, jaw line, and brow ridge. And on the other side, we have a remarkably similar image of Cleopatra. Might as well be Antony in a wig. Not exactly Elizabeth Taylor. Maybe a little more Theda Bara. So, was Cleopatra of good Roman stock? Not quite. But those familiar features would more likely have been met by an approving Roman nod rather than some exotic image of Cleo as a priestess of Isis. Now, it’s not likely that this coin was widely circulated in Rome, itself, since it was probably minted in the Eastern Mediterranean, but it surely proved of propagandistic value among Cleo and Antony’s supporters in the Roman East.

It was Cleopatra’s fluid cultural affiliation and renown charisma that beguiled Roman generals Julius Caesar and Mark Antony and that contributed to her remaining in the forefront of popular culture and urban legend to this day. The question marks surrounding her parentage do open the door to discussions of ethnicity, but the important point to remember when penning heavy-handed commentary on the subject is that the debate is really a manifestation of modern racial tensions disguised under the banner of Ancient Egyptian history, society, and culture. And it’s up to you, the level-headed, 21st-century individual, to rise above it and look past all those generations of baggage.

Hey! What about the Nubian dynasty? Yes, the 25th dynasty rulers of Egypt hailed from the Kingdom of Kush, or what we more popularly call the land of Nubia, present day northern Sudan and part of southern Egypt. There’s plenty of evidence and consensus today that these rules, including Piye, Shabaka, and Taharqa, were black Africans, although culturally, after generations of close Egyptian contact (or occupation, some might say), they were culturally quite Egyptian. They built pyramids, worshipped the Egyptian gods, and ruled in a traditionally Egyptian manner. You could even say the Nubian rulers were more Egyptian than the Egyptians of that day and age, circa 760 to 656 BC. And that adds even more strength to the argument that it didn’t matter what the color of your skin was in Ancient Egypt. If you walked like an Egyptian and talked like an Egyptian, then you were an Egyptian. There’s a great article from the February 2008 issue of National Geographic Magazine about Egypt’s black pharaohs. The link’s kinda long. You can see it on screen here or head on over to ancientartpodcast.org and click on “Egypt’s Black Pharaohs” on the Resources page. There you can even take the “Race in Ancient Egypt” quiz.