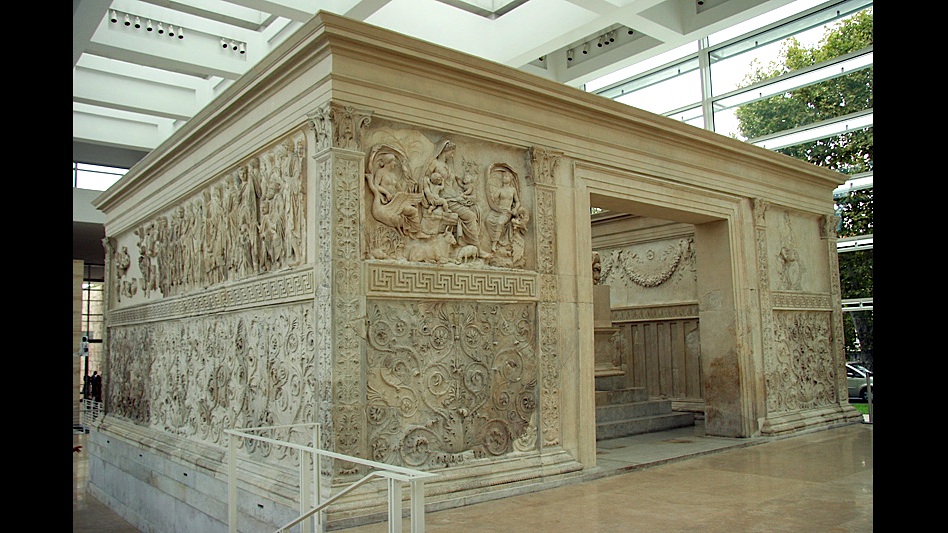 Welcome back to the Ancient Art Podcast. I’m your host, Lucas Livingston. From the year AD 14, the words of the deceased Roman emperor Augustus Caesar, the Res Gestae Divi Augusti or The Acts of the Divine Augustus, come to life:

“On my return from Spain and Gaul in the consulship of Tiberius Nero and Publius Quintilius after successfully arranging affairs in those provinces, the senate resolved that an altar of the Augustan Peace should be consecrated next to the Campus Martius in honor of my return, and ordered that the magistrates and priests and Vestal Virgins should perform an annual sacrifice there.” [1]

The original bronze pillars no longer survive, but numerous copies of the text proliferated throughout the Roman empire. Thanks to good luck and a monumental restoration effort during Italy’s Mussolini era, you can visit the Altar of Augustan Peace mentioned in that passage in Rome today standing next to the remains of Augustus’s mausoleum.

The Altar of Augustan Peace, or Ara Pacis Augustae, was commissioned by the Roman senate in 13 BC to honor Augustus’s triumphal return from Spain and Gaul. It was consecrated four years later on January 30th, 9 BC as a sacred monument celebrating the new era of peace and prosperity that Augustus’s military victories would bring to the Roman empire. The senate’s hopes and dreams were at least in part realized in that Rome enjoyed a good 200-year period of relative civil and military stability, the so-called Pax Romana, but we know things weren’t quite as good and cheery in Roman politics itself.

The original location of the Ara Pacis was the northeastern corner of the Campus Martius, the “Field of Mars,” once an open area for military training on the outskirts of Rome, but by this time it was already highly developed. That happened to be a floodplain of the Tiber river and it was eventually covered by layers of silt. The altar was reconstructed at its new location in 1938, celebrating the 2,000th anniversary of Augustus’s birth. [2] The current pavilion that houses the Ara Pacis, designed by American architect Richard Meier, opened in 2006.

The altar is now orientated more or less south-to-north, but going forward here and in most descriptions, the orientation refers to the altar’s original alignment, which was west-to-east. So when you come across a reference to the west façade, most likely it’s referring to what’s now the south side. But don’t get bogged down in that. [3]

The marble structure is heavily reconstructed and large sections are entirely blank, but that doesn’t prevent us from taking in the grandeur of the monument. We’re greeted at the western façade by a stairway ascending up into the monument to the altar where, in Augustus’s words, the magistrates, priests, and Vestal Virgins would perform an annual sacrifice. A divine tribute, perhaps, in thanks to and insurance for the continued era of peace. Flanking the stairs, the enclosure wall, carved in richly detailed relief, is divided into upper and lower registers by a meandering Greek key, or simply called a “meander.” As an aside, the term “meander” comes from the Greek name for the twisty Carian river Maeander. [5]

Around the entire enclosure wall, the lower register displays a modestly low-carved, but highly decorative relief of twisting ivy, grapes vines, acanthus scrolls, and many other identified species of flora and even fauna. Prominently toward the top we find a repeating motif of swans spreading their wings wide, their necks craning down, facing opposing directions, left to right, one swan after the other.

The lush vegetation may represent the fruitful fertility and abundant bounty that the new age of Augustan peace has brought. Yet the twisting vines are not in the chaotic disarray of overgrowth, but are carefully balanced with a symmetry perhaps implying that the Augustan age is still firmly bound by law, order, and justice. Augustus shines through as both the nurturing provider and the lawful patron.

The lush yet orderly vines may reflect a popular interpretation that the symbolism throughout the Ara Pacis reflects the new Augustan age as a return to the mythic Golden Age. [6] In his Metamorphoses, Ovid, the Roman poet contemporary to Augustus, describes the Golden Age as a time of justice and right with no need for work or worry. People, cared for and nourished by bountiful nature, lived in peace without the pains of labor in the fields. Spring was eternal and the world in which mankind lived was nothing short of paradise (1.89-112). The Golden Age came to a close with the violent overthrow and death of Saturn at the hands of his son Jupiter. The new reign of Jupiter brought about the seasons and, with that, introduced suffering and labor to mankind for survival (1.113-124). From utopian peace and bounty, mankind fell towards bitter militant strife and harsh agrarian work (1.125ff.).

The use of Golden Age imagery in Augustan propaganda draws a parallel between his Pax Romana and the Saturnian Golden Age, thereby making the statement that Augustus has brought about a new age of idealistic peace and prosperity to endure for all time. Augustus hoped to bridge the distinctions between the ages of Saturn and Jupiter by incorporating both ideologies into his reign. In the reestablished order, laws, morals, and justice he respected the current age of Jupiter; in the renewed peace, prosperity, abundance, and endurance he sought to emulate the utopian age of Saturn. Augustus seemed to desire that the Roman people metaphorically associate him with both Jupiter and Saturn. [6]

The upper register on the west side shows two foundational events from Rome’s legendary history. On the left is the badly fragmented relief of Romulus and Remus, the mythical founders of the city said to have been raised by a she-wolf. The two adults and the only original parts to this relief are thought to be Faustulus, the shepherd who discovered the boys, and their father, Roman God of War, Mars. Entirely reconstructed, however, are the images of Romulus and Remus nursing from their lupine foster mother. The reconstruction strongly resembles surviving Roman images of this scene, but that shouldn’t let you totally take down your critical guard.

The scene to the right is a little more debated. For over a century, the popular interpretation was that it represents Aeneas, hero of Virgil’s Aeneid, performing a sacrifice upon his arrival in Italy. [7]

Julius Caesar and Augustus claimed Aeneas as an ancestor and his mother was the goddess Venus, which would explain all the swan imagery in the lower register. A more recent interpretation that’s gotten a lot of traction, though, is that its Numa Pompilius, Rome’s second king after Romulus. Fine, but that’s kinda boring. Numa Pompili-who? Check out The Art Bulletin from June of 2001 for the article. [3] The Romulus/Numa interpretation does tie in nicely with the Augustan Golden Age symbolism. The warrior king Romulus balanced by the peacemaker Numa; the blissful Golden Age of peace sustained by the diligent rule of law and military might. [8]

So, if the west side to the enclosure of the Ara Pacis displays a balance of peace and war between Rome’s early mortal founders, how about the east side? How about a divine parallel? The east side on the right displays a reconstructed image of the goddess Roma. The bellicose goddess is seen seated at leisure, helm slid back on her head, with a trophy of weapons at her feet. Like Romulus and Augustus, it’s through the might of combat that peace is achieved. The relief to the left of the doorway shows a buxom maternal figure embracing two chubby babies echoing the Romulus and Remus panel on the diagonal opposite side. She has been variously identified as Mother Earth (or Tellus), Venus, and Peace. Abundant vegetation and livestock surround the figures, who are further flanked by two other ladies with billowing drapery. One rides a swan and the other a wicked-cool winged dragon. A spilled urn in the lower left corner pours forth a river that runs along the base of the entire panel. This panel could further reenforce the Augustan Golden Age themes of peace, fertility, prosperity, and abundance. Perhaps the central goddess Peace could balance the warlike Roma, which would parallel the west side’s war and peace theme. Remember that the Ara Pacis was an Altar of Peace achieved through the defeat of Rome’s rivals. [9]

And the north and south sides have lots of people. Goodnight folks! See you next time! … What, you’re still here. Oh, ok, really quickly then. The north and south sides both show processions of religiously garbed Romans, which understandably some of you may have mistaken for a frat party. Lots of ink has been spilled on identifying many of the individuals, and quite convincingly at times, including Augustus, Livia, Agrippa, and Tiberius, until someone comes along and overturns scholarly consensus. One interesting idea is that this may represent the celebration on July 4th, 13 BC, the date when Augustus returned to Rome from Spain and Gaul and the occasion for the commission of the Ara Pacis. [10] Or maybe it represents the ritual procession that honored the dedication of the Ara Pacis four years later.

Interestingly, it’s been pointed out that Augustus is on the south wall, which falls between the images of the peaceful king Numa Pompilius on the west and the goddess Pax on the east (versus the north side between warlike Romulus and militant Roma), which perhaps bolsters Augustus’s aspirations for peace, overshadowing the military victories used to establish the new Pax Romana. [9]

Lastly, as with so many of the works of art we explore on the Ancient Art Podcast, the Ara Pacis was once originally painted with vivid colors. You can actually get a taste for how it once looked through the miracle of technology. According to the Ara Pacis Museum website at arapacis.it, every Saturday night through January 7th, 2012, they’re illuminating the altar with colored light to bring these mute stones to life. [11] If you can’t get there in person by the 7th, don’t worry. Thankfully, this is something they seem to do once or twice a year. There are some great photos of the colored light installation floating around on the web. If you don’t want to get your Google-foo on, just head over to ancientartpodcast.org and click on episode 46 for the photo gallery and credits to the original sources. And while you’re there, those of you doing reports on the Ara Pacis, be sure to check out the footnotes for this episode, where you’ll find some great additional resources to study the monument in much more detail than what we covered here. You might also want to check out the Bibliography on the Resources page for more general references.

Thanks for tuning in. If you have any questions or comments, email me at info@ancientartpodcast.org or fill out the Feedback form on the website at feedback.ancientartpodcast.org. Connect with the podcast at facebook.com/ancientartpodcast and tweet to me on Twitter @lucaslivingston. If you want to support the podcast, help spread the word leave your comments and ratings on YouTube and iTunes. Thanks and see you next time on the Ancient Art Podcast.

[3] Rehak, Paul. “Aeneas or Numa? Rethinking the Meaning of the Ara Pacis Augustae.” The Art Bulletin, Vol. 83, No. 2 (Jun., 2001), pp. 190-208. <;http://www.jstor.org/stable/3177206>; Retrieved 21 December, 2011. See specifically note 3 on page 201 regarding the change of orientation of the Ara Pacis. See also: “As for the new orientation, it was rotated roughly 90 degrees counter-clockwise, so that the west or principal entrance to the enclosure now faces south; this should be borne in mind when reading descriptions of the monument, or indeed when viewing websites.” Retrieved 21 December, 2011.

[6] Zanker, Paul. The Power of Images in the Age of Augustus. Trans. Alan Shapiro. Ann Arbor: The University of Michigan Press, 1988.