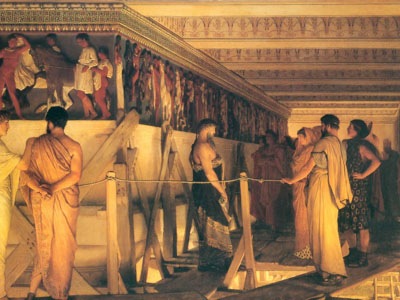 Hello and welcome back to the SCARABsolutions Ancient Art Podcast, your guidebook to the art and culture of the Ancient Mediterranean World. I’m your host on our far-flung journey, Lucas Livingston. Okay, now we’re going to get serious. For the next few episodes—I don’t know how many just yet, but we’ll find out—we’re going to explore one of the most iconic, monumental, pivotal, and contentious works of art from Ancient Greece: the Parthenon frieze. Huh!? You were probably expecting something a little more familiar, like the Venus de Milo or the Parthenon itself. Well, while the Parthenon frieze may not ring a bell for some listeners, you’re probably more familiar with it than you realize. Perhaps it’s a little more recognizable by the name the Elgin Marbles. You sometimes also hear it pronounced the Elgin Marbles. Tomatoe, tomatoe.

The Parthenon frieze remains one of the more contentious works of art from Ancient Greece—that is, now that resolutions have been reached for quite a few Greek and Roman antiquities with, ahem, questionable provenance. Check out the article “A Tangled Journey Home” in the September/October 2007 issue of Archaeology magazine for a great little synopsis of repatriated looted art that surreptitiously found its way from the Ancient Mediterranean to the galleries of great American museums. From 1802 to 1812, Thomas Bruce, 7th Earl of Elgin, British Ambassador to the Ottoman Empire, secured permission from the Ottoman Empire to remove the Ancient Greek fragments that now encompass the Elgin Marbles. At the time Greece was under the Ottoman Empire. In his own defense, Lord Elgin claimed to be ensuring the survival of these poorly neglected treasures in the face of Ottoman indifference. From the time of their export through today, the Elgin Marbles have incited outcry and debate. The Greek government continues to demand their return, while Britain maintains that they rightfully deserve the Marbles for having spared them from certain deterioration. Never mind the fact that some of the Marbles received significant albeit accidental damage during a rather brutal cleaning at the hands of the British Museum. At least the British Museum has honed up to this and even has a short article on the cleaning damage on its website. Check that out and a whole host of other interesting Parthenon links in the Additional Resources section at SCARABsolutions.com.

The Parthenon frieze is … well, was a continuously running decorative band inside the Parthenon of the Athenian Acropolis. Not exactly in the interior, nor the exterior. It was located in a space high above your head between the peristyle, which are the outer columns, and the cella, the interior building. I was so excited when back in July of 2006 I had the opportunity to go visit Nashville, Tennessee as a guest speaker for a tour on Ancient Egypt. Why? Well, Nashville’s a cool place and all, but I was especially excited about visiting the scale replica of the Parthenon complete with the monumental statue of Athena Parthenos and plaster casts of the pedimental sculpture inside. But I was pretty disappointed to discover that they don’t include the frieze. But hey, this is better than nothing. This is phenomenal. For more photos of the Nashville Parthenon, check out SCARABsolutions.com.

The Parthenon, crowning glory of the Athenian Acropolis, constructed during the mid 5th century BC, the height of the Classical Period. It gets its name from Athena Parthenos, the maiden and patron goddess of Athens, whose glorious chryselephantine statue, designed by visionary sculptor Phidias, emblazoned within. Phidias supervised construction of the Parthenon and its sculpture from 447 to 432, including the design and execution of the Parthenon frieze.

This painting by Sir Lawrence Alma-Tadema from 1868 at the Birmingham Museum and Art Gallery beautifully captures an imaginary gala reception at the unveiling of the Parthenon frieze some time in the 430’s BC. Here we see Phidias standing proudly among his fellow Athenians high on the scaffolding at the level of the frieze. Notice, of course, the vivid colors. As with much of Ancient Greek and Roman sculpture and architecture, the Parthenon frieze was originally highly painted; gaudily, some might say. But today all the pigment, save miniscule traces, has weathered away.

It would take hours to cover the complete history of the Parthenon and her frieze, every nuance of the artistry and various interpretations. At this point, I want to skip over most of that and focus on one particular thesis. We come across a number of different interpretations surrounding the vision behind the design of the Acropolis. I want us to explore one specific interpretation of the Acropolis. Here we’ll take a look at how the Acropolis and more specifically the Parthenon frieze reflect the strongly rising imperial aspirations of Athens in the wake of the Persian War. This is a time when Athens was beginning to see herself as the successor to her former enemy, the Persian Empire, that foreign megapower so demonically depicted in the recent blockbuster film the 300. Athens and Persia are traditionally seen as complete opposites in political and cultural ideologies: the absolute democracy vs. the domineering empire. What’s ironic is that after the Persian War, after Persia’s military might was completely obliterated, Athens began to resemble Persia in her political practices. Athens has taken over as the dominating imperial power in the Mediterranean and this is something completely new for Athens. There’s really no political model for empire known to Athens other than Persia. It actually makes a lot of sense, then, to look to Persia for an imperial model, who only some forty years earlier was governing the very same eastern Greek nations, which Athens now controls. And to take it even one step further, Athens might also very well seek to model her new political art and iconography after Persian themes and iconographic motifs—especially in the Parthenon, the grandest monumental construction on the new Periclean Acropolis. The Parthenon, emblem of Athenian pride, greatness, and victory over foreign invaders, soon came to parallel pretty similarly the Apadana, the great Audience Hall at the Persian capital city of Persepolis. And to stretch us to the final limit and the ultimate purpose of the next few episodes of the podcast, even the Parthenon frieze itself bears remarkable iconographic and thematic similarities to the monumental terrace reliefs of the Apadana at Persepolis. Come on now as we check out the similarities between the Parthenon frieze and the Apadana reliefs at Persepolis—similarities that we’ll see come about as a result of Athens intentionally emulating the Persian imperial programmatic vision for her own Parthenon and Acropolis.

Of course, we can’t just jump right into trying to make the argument for the transmission of Persian imperial artistic themes to Athens unless we first demonstrate the vehicle for transmission. So that’s what we’ll need to concentrate on first. The Parthenon frieze participates in the strong tradition of the Ionic frieze. The Ionic frieze is a continuous band of decorative relief carving running along towards the top of the inside or outside walls of a temple. That’s a very brief explanation. We’ll take a closer look at the development and influences of the Ionic frieze later on. It’s interesting and important to note that, when Athens’s predecessor, the Persian Empire, was dominating the eastern Mediterranean, there’s a bit of a crossover and co-development between the Ionian and Persian artistic styles. And it makes a lot of sense that you’d see this co-development, as we’ll explore next time. So, we’ve actually got two influences shaping the Parthenon frieze: one, the Ionic frieze and two, the Apadana reliefs at Persepolis. And the Persian influence on the Parthenon Frieze is also two-fold: both indirectly via the Ionic frieze and directly straight from the Apadana reliefs. But what makes Persia so readily accessible to Greek artists? What’s this vehicle for transmission that I was talking about earlier?

We’ll answer that in the next episode. Simply to ensure that I don’t lose your attention, I want to break up this lengthy topic into episodes of somewhat reasonable length. So, be sure to tune in next time as we take a closer look at the Greeks in Persia and the significance this has on the development of the Ionic frieze. But if you want to jump the gun and get a head start, check out the bibliography in the Additional Resources section at SCARABsolutions.com. I just added a whole section exclusively on the Athenian Acropolis. Thanks for listening and see you next time on the SCARABsolutions Ancient Art Podcast.