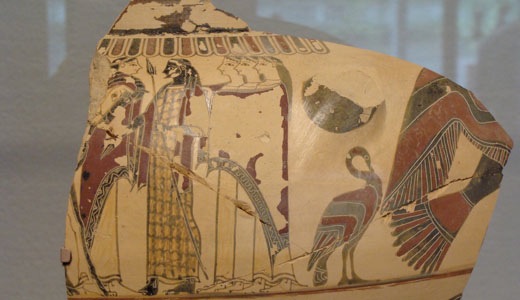 Hey folks. Lucas Livingston here at the SCARABsoltuions Ancient Art Podcast. Great to have you back. In this episode, we’ll take a brief look at the historical climate that gave rise to Greek sculpture. Yeah, tall order.

“Gave rise to Greek sculpture” you say? There actually was a time before sculpture in Ancient Greece. Well, between sculpture, actually—the Greek Dark Age—between the relatively advanced Bronze Age and the much later Orientalizing and Archaic Periods. Remember back in episode 5 on the Art Institute’s Corinthian pyxis, we talked about the Orientalizing Period of approximately the 7th century BC—to quote myself, “The Orientalizing Period is a time when the Greeks renew contact and trade with the different civilizations of the Mediterranean and the Ancient Near East after a long period of isolation during the Greek Dark Age and Geometric Period. This is a fascinating time of rediscovery, invention, and assimilation.”

In that episode we looked at a few of the interesting Near Eastern influences in the developing arts of Greece. On Greek vase painting, we start to see fantastical creatures of the Near East, like sphinxes, griffins, and chimeras, and the adoption of long-standing, stock, Near Eastern decorative motifs like rosettes and palmettes. The Orientalizing Period was a time when the Greeks were suddenly thrust onto the world stage through mercantile exchange with Phoenicia, Syria, and other Near Eastern nations. The Greeks became familiar with Near Eastern artistic traditions through all the patterned textiles, decorated vessels, and other ornamentation that these foreign merchants brought with them to Corinth and other ports of trade. But just as the Greeks enjoyed and adopted these Near Eastern designs, they also immediately assimilated and adapted them to suit their own needs. And we discussed one example of this assimilation at length in the decoration of the Art Institute’s Corinthian pyxis.

There are a number of other profound developments in the Greek arts at this time, like the general manner in which the human form is represented on a two-dimensional painted surface. In episode 5 we explored how some areas of the Greek mainland, like Athens, continue in the traditional vase painting design of the previous century, with a stark contrast of the darkly silhouetted geometric figures against a background of meandering patterns. Corinth, however, pushes this aside for a more natural style of gentle curves and elaborate outlines of the figure’s contour with a smoother, flowing brush. We see the detail of human anatomy, facial features, and pleats and folds in the drapery. Coloration also makes its way onto the scene with the use of added red and white. The human form also becomes more dynamic, breaking away from the static paratactic pose of the Geometric Period. Shoulders and the chest might be seen in profile as opposed to the odd rendering of two shoulders and a frontal chest with a face turned in profile. So we start to see an increased attention to the naturalism, the manner in which the reality of the three-dimensional world works and how it can be expressed on a two-dimensional surface, a feat which the Greeks are only now beginning to undertake. But I don’t mean to give all the credit to Corinth. During the Archaic Period of the late 7th and 6th century BC, Athens was breaking new ground too, as we’ll soon see with the advent of sculpture.

The introduction of free standing monumental sculpture stems from another fascinating influence on the developing Greek arts, which deserves a lot of attention—but for this influence we need to look a little south to Egypt. Contemporary to the second half of the Greek Orientalizing Period and first half of the Archaic Period was the Egyptian 26th Dynasty, the Saite Dynasty of the Late Period. We call it the Saite Dynasty on account of the capital of Egypt at this time, the city of Sais in the delta region. And what time is this? We’re talking 664-525 BC. During the prior few centuries of the Third Intermediate Period, Egypt really blew it and lost all the power and influence that it acquired during the New Kingdom. Now during the Late Period, many of the nations surrounding Egypt had become major political and military powers that Egypt had to contend with. Since the Egyptian army wasn’t a whole heck of a lot to boast about, Pharaoh Psammetichus I (or in the Egyptian Psamtik) took the bold leap of hiring foreign mercenaries to fill the void. Psammetichus not only wanted to establish a strong military presence in Egypt, but he also wanted to forge military, political, and economic alliances with sympathetic foreign powers, namely the Greeks.

The Saite Dynasty is one of the coolest time periods in the history of the Mediterranean, because this is when we see for first time a strong Greek presence is Egypt. Psammetichus and other Saite rulers used Greek mercenaries to fight their battles and Greek merchants and craftsmen to support a strong economy of foreign trade in the Mediterranean. We even see the establishment in Egypt of Greek military barracks and the thriving development of a Greek civilian settlement. The port city of Naukratis exploded onto the scene as the short-lived, but preeminent port of trade in the Mediterranean. Sadly, today there’s not much more remaining than a few foundations. Naukratis was a fascinating melting pot of Egyptian and Greek culture. Greek and Egyptian temples were erected side-by-side. Greek merchants and craftsmen set up shop and traveled the Nile, seeing firsthand the splendors of the two-and-a-half thousand year-old Egyptian civilization. And just as the Greeks were inclined to adopt Near Eastern ideas to enhance their artistic repertoire, there are also some very distinct Egyptian influences on the cultural development of Greece in the aspects of domestic and religious art, temple architecture, and even religious belief and ritual. Greeks begin to visit Egyptian temples, dedicating bronze Egyptian votive statuary with Greek prayers inscribed on them. Greek votive statuary begins to take on an Egyptian form like this figurine of a seated woman nursing a child, which closely resembles the very popular figure type of Isis nursing the child Horus.

So, at the beginning of this episode I said we’ll take brief a look at the historical climate that gave rise to Greek sculpture. We did that, the stage is set, and before I start to lose you, we’re going to wrap things up here. We’ll pick up next time with a close look at one of the earliest known and most intact Greek sculptures of a particular statue type called a “kouros”—the so-called “Metropolitan Kouros” at the Metropolitan Museum of Art in New York.

Be sure to check out the bibliography at scarabsolutions.com for a number of references on the Greek contact with Egypt during the Saite Dynasty. On a technical note, if you were having trouble viewing some of the photo albums on the website using version 3 of Firefox, that’s because of a javascript incompatibility between iWeb and Firefox 3. After much searching of the online Apple support forum, one crash, and some colorful language, I think I’ve managed to implement a fix, so you should be able to browse the photo albums again. Thanks for listening and tune in soon for the next episode of the SCARABsolutions Ancient Art Podcast.

One Reply to “15: Origin of Greek Sculpture”