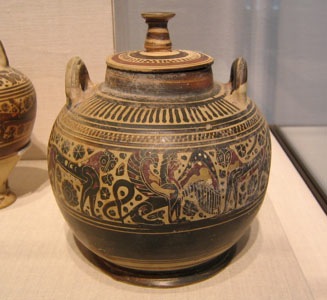 Welcome back to the SCARABsolutions Ancient Art Podcast. This episode is coming out a little later than I had wanted on account of a cold that I’ve been getting over. But I’m pretty much decongested now and more or less back to normal.

In this episode, I want us to take a look at a cute little pyxis from Corinth. A pyxis is a specific type of Greek vessel used to store cosmetics, jewelry, or other trinkets. They come in a variety of different shapes—squat basket-like, cylindrical jars, box-like, and spherical, as we have here, along with a separate lid and handles. This pyxis at the Art Institute of Chicago is dated to about 580-570 BC, towards the end of the Greek Orientalizing Period, late 8th to mid 6th centuries BC. The Orientalizing Period is a time when the Greeks renew contact and trade with the different civilizations of the Mediterranean and the Ancient Near East after a long period of isolation during the Greek Dark Age and Geometric Period. This is a fascinating time of rediscovery, invention, and assimilation.

Albeit not the most politically correct term, the “Orientalizing Period” has nonetheless stuck. The term refers to the tremendous cultural and artistic impact that the renewed contact with Ancient Near Eastern cultures had on the blossoming civilization of Greece. One particularly successful center for the flourishing of culture and commerce during the Orientalizing Period was the city of Corinth located on the narrow isthmus connecting the Peloponnesus with mainland Greece. Due to its strategic location with ports accessing both the Aegean and Adriatic, Corinth became a rather lucrative port of trade for Syrian, Phoenician, and other Near Eastern merchants. Corinthians saw the influx of exotic metal ware and ivory trinkets, pottery designs, and elaborate textile patterns. Some scholars even think that Near Eastern artisans and craftsmen may have made their way over to Greece to ply their skills. The Greeks themselves began to travel more extensively to foreign lands, including great forays up and down the Nile of Egypt beginning in the mid 7th century. And all this exposure to foreign artistic motifs and conventions, long-standing monumental architecture of ancient civilizations, new stories, cultures, myths, and legends had a tremendous impact on the visual arts of Ancient Greece.

The artisans and consumers of Corinth had a particular appeal for the Near Eastern aesthetic, or at least their spin on what was seen as quote-unquote “Oriental.” While Athens continues to linger in the traditional Geometric vase painting design of the previous century, Corinth quickly pushes this aside in favor of new Oriental designs, like exotic chimeras and sphinxes, ferocious wild beasts and prey, and flowering rosettes and palmettes. The stark contrast of the darkly silhouetted Geometric figure against a background of meandering patterns, gives way to gentler curves and elaborate outlines of the figure’s contour with a smoother, flowing brush. Color also begins to make an appearance in Corinthian Orientalizing vase painting. You can clearly see the use of red, black, and white on the Art Institute pyxis. This pyxis also seems to display a sense of horror vaccui of the earlier Geometric Period. Every possible blank space on the background is strategically filled with some sort of rosette or linear pattern so as not to leave any large portion of undecorated surface.

What’s immediately most striking about this pyxis is, of course, the central decorative scene. In the very center we have a composite monster with the torso and legs of a lion, wings of an eagle, and head of a human female, known in Greeks mythology as the sphinx. This pyxis is attributed to the so-called “Ampersand Painter” because the shape of the sphinx’s tail is that of an ampersand (you know, the “and” symbol). This ampersand-shaped tail is the signature mark of this particular painter or workshop and it can be seen on other works in other museum also attributed to the Ampersand Painted. The earliest account of the sphinx in Greek myth comes from Hesiod’s Theogony, one of the earliest works of Greek literature, composed sometime in the late 8th to early 7th century BC. Hesiod briefly mentions the sphinx among his litany of the origins of all the myriads of hybrid monsters and creatures conjured up in Greek minds or imported by the Greeks from neighboring cultures and myths. Now, it’s hard to argue that the sphinx is a purely Greek invention when you’re faced with all the similar composite creatures of Near Eastern tradition that first started to make their way over to Greece around the time when Hesiod puts pen to paper, creatures like the lammasu, shedu, manticore, griffin, and chimera. But certainly the oriental influence contributes to the new forms of expression and experimentation, with both a profound interest in the ancient civilizations of the Near East and a new interest among the Greeks in their own ancient ancestry.

It’s around this time when the Greeks begin to look more closely at the remains of their own Bronze Age Mycenaean ancestors. At the same time when the great Homeric Epics of the Iliad and Odyssey were being recited, as the Greeks were weaving tales of the heroic warriors Achilles, Menelaus, and Agamemnon, so too were they looking out over the standing ruins of ancient Mycenae, the palace of King Agamemnon. There’s even evidence that the Dark Age and Archaic Greeks excavated Mycenaean tholos tombs, digging down to their entrances with their monumental Cyclopean masonry to establish shrines and offer votives at the tombs of these heroic warriors.

So where are we going with all of this? Well, the central sphinx is conventionally seen as some sort of Near Eastern or Oriental influence. Ok, I’ll buy that. Flanking the sphinx you’ve got a couple feline creatures usually interpreted as lions or leopards. Felines, particularly lions, are very prevalent throughout Ancient Near Eastern art in architectural relief from the walls of ancient Babylon and Persepolis to the smaller decorative arts. But I argue a very different and distinctly indigenous influence taking place here. See how the two lions have their bodies turned inward toward the central sphinx, but their faces gaze outward with giant, blank, piercing eyes fixed upon you, ferocious beasts of prey staring you down. I mentioned how the Greeks of this day and age were interested in exploring and rediscovering their own heroic and mythic past of the Bronze Age Mycenaean Civilization and that the ruins of Ancient Mycenae, the so-called palace of King Agamemnon were readily visible and available to the early Archaic Greeks. The most visually powerful and notable architectural remains at Mycenae is the well-known Lion’s Gate. Here we are confronted by two colossal lions, their muscular bodies rearing up on a central platform. Their faces are now lost and the dowel holes suggest that they were carved separately. The way the dowel holes are positioned and the form of what’s remaining lead most scholars to believe that the faces were likely turned to gaze outward, staring down at the lowly people passing underneath the monumental gateway. Throughout Ancient Mediterranean and Near Eastern cultures and even well beyond into the Middle Ages of Europe, lions are a common emblem of kingship. The effect of this in-your-face confrontation by these gargantuan beasts conditions the viewers approaching the gate. The Lion’s Gate conveys this message of “Beware! Know that the king within is as mighty as a lion.”

The Lion’s Gate was in plain sight of the Greeks. In the day when monumental art, sculpture, and architecture reemerge from a long period of dormancy, it’s not surprising that they’d look back to their country’s former glory while also incorporating ideas and motifs from exotic civilizations abroad. In the mid 7th century BC the Greeks began creating their first monumental temples in stone. Perhaps the earliest known stone temple in Greece is that of Apollo at Corinth with a date somewhere between 670 and 630 BC. And in a couple generations, the Greeks settled on the sort of temples we think of when we think of Greek temples, with the surrounding columns called a peristyle, the pitched roof, and triangular pediment, all that sculpture above the east and west sides. The earliest known Greek temple of this style is the one to Artemis on the island of Corfu, just off the western coast of Greece. Built around 580 BC, right around the time when the Art Institute’s pyxis was created, the temple of Artemis displayed a magnificent pediment with a sculptural motif that should be pretty familiar to us by now. Seen from their sides, two great cats poise with their muscular bodies ready to pounce. Their faces are turned outward, just as in the Lion’s Gate, gazing at the tiny worshippers below as they make their approach to the house of the maiden huntress Artemis. In the center of the pediment between the lions stands the Gorgon Medusa, a fiendish creature with snakes for hair, said to be so ugly that her gaze would transform you to stone. This presentation of otherworldly ferocity and might is certainly something to give you goose-bumps, if you were an Ancient Greek not used to seeing such incredible displays nor desensitized by modern horror flicks.

And moving along to our darling little pyxis, the Ampersand Painter seems to have jumped on the bandwagon of Orientalism and Mycenaean revivalism (and that’s not a real term. As far as I know, I just made it up.) But why use this confrontational lion motif that might otherwise be more appropriate for temples and royal palaces? I don’t think the message here is “Beware the cosmetics housed within!” No, more likely it’s just meant to give us a little moment to pause … a jarring experience (ugh … pardon the pun). Remember, what we’re looking at here, as with most Ancient Greek ceramics throughout museum collections, is a grave good, something buried with the recently departed. This vessel exists because someone has died. While a pyxis for the living might be plain or decorated with little flowers and prancing deer, this vessel for the dead has a confrontational gaze inducing a moment to pause and reflect. A memento mori. A reminder of our own mortality.

On that cheerful note …

Thanks for listening. And don’t forget to swing by the website, scarabsolutions.com for additional resources, an extensive bibliography on ancient art and civilization, photos, and links to great external resources. And most recently, I’ve added a link that’ll let you subscribe to the podcast in MP4 format, so you can play it with images on just about any digital media player. Check out the website for more details. Take care, stay warm, and see you next time on the SCARABsolutions Ancient Art Podcast.